Gender-based violence is one of the most prevalent human rights violations in the world. It knows no social, economic or national boundaries. Worldwide, an estimated one in three women will experience physical or sexual abuse in her lifetime. Gender-based violence undermines the health, dignity, security and autonomy of its victims, yet it remains shrouded in a culture of silence.

UNFPA, as a lead agency in working to respond to and reduce gender-based violence, supports programmes in over 150 countries and territories worldwide in humanitarian, peace and development settings.

Scale of the problem

While gender-based violence is not limited to violence against women and girls, according to World Health Organization’s (WHO) data from 2021, almost one in every three women, or approximately 736 million women, have been subjected to intimate partner violence, non-partner sexual violence or both at least once in their lifetime. This does not account for the 1 woman every 11 minutes who is killed by her partner (UNODC, 2020).

Violence starts early in the lives of women. Of those who have been in a relationship, almost 1 in 4 adolescent girls aged 15–19 (24 per cent) have experienced physical and/or sexual violence from an intimate partner or husband. The UNFPA Geospatial Intimate Partner Violence dashboard shows intimate partner violence prevalence data for 119 countries and territories worldwide, disaggregated by location, age, education, residence, employment and wealth. (The Geospatial Intimate Partner Violence dashboard is the only available dashboard with data at the subnational level to support more detailed analysis, published in early 2021.)

The top 10 countries with the highest prevalence (in percentage) of Intimate Partner Violence (UNFPA, 2020) 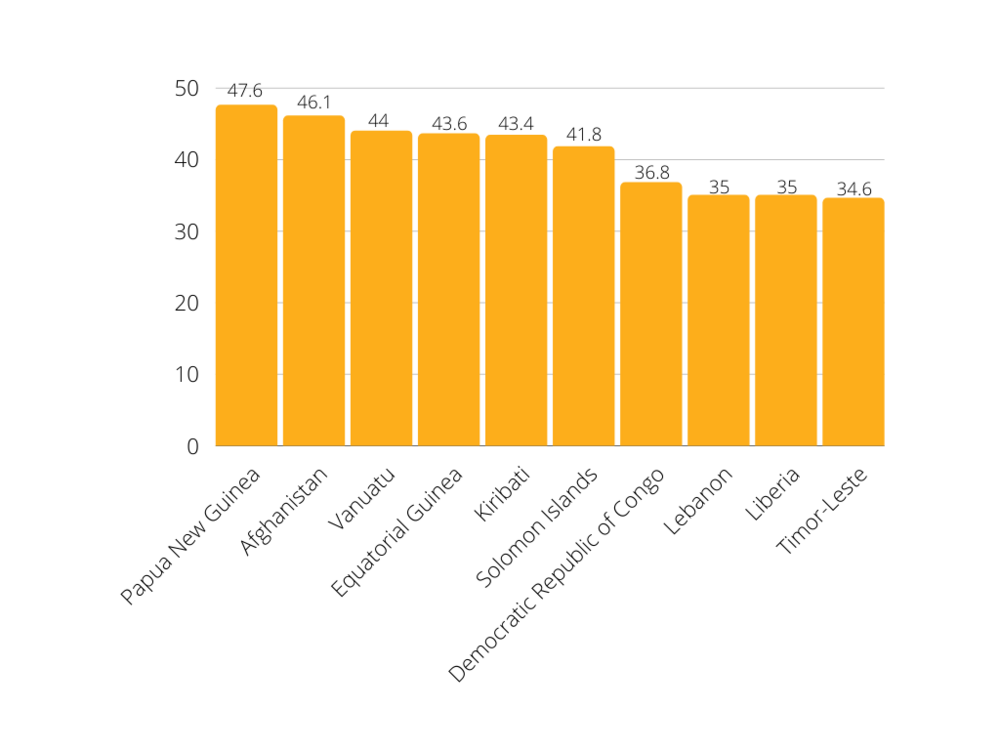 Violence is pervasive in all spaces women occupy – including digital spaces. UNFPA is working to understand how technology-facilitated violence manifests and in making all spaces safe and free from violence. Worldwide, data from The Economist Alliance Unit indicates that 38 per cent of women with Internet access have personally experienced online violence. Research by Plan International among young women and girls has shown that 58 per cent of women aged 15-25 have been subjected to online harassment.

When a woman has been subjected to gender-based violence, it has short and long-term consequences for her physical, mental and sexual and reproductive health. Injuries, unintended pregnancies, sexually transmitted infections and gynaecological disorders, as well as anxiety, depression, post-traumatic stress disorder and even self-harm are only some of the impacts of violence that survivors may face. For example, survivors of intimate partner violence have a twofold increased risk of undergoing an induced abortion, and are 50 per cent more likely to have a sexually transmitted infection or HIV.

Gender-based violence is not only a violation of individual women’s and girls’ rights. The impunity enjoyed by perpetrators, and the fear generated by their actions, has an effect on all women and girls. It also takes a toll on a global level, stunting the contributions women and girls can make to international development, peace and progress.

What does UNFPA do?

UNFPA works in partnership with women’s and youth feminist organizations, networks and movements, civil society organizations, governments, academic and research institutes and other partners, to support interventions to end violence against women including through prevention programming, service delivery, policy and laws and data and research.

UNFPA supports comprehensive, survivor-centered responses in humanitarian and development settings through quality health, social and justice services. At the core of UNFPA’s approach are the right to safety, confidentiality, non-discrimination and self-determination for all survivors.

One key response is provided through integrating services for survivors into programmes, policies and advocacy on sexual and reproductive health. As health services are among the first places survivors of gender-based violence seek assistance, UNFPA leverages this critical opportunity to reach affected women and girls. Those who present in need of support are referred to a wide range of assistance, including life-saving medical services and supplies, cash or voucher assistance, dignity kits, psychosocial services and legal support.

UNFPA also plays a role in setting standards for respectful, survivor-focused care. Its work is always in support of and in line with the joint UN Essential Services for Women and Girls Subject to Violence and the Interagency Minimum Standards on GBV in Emergencies Programming. UNFPA is the Inter-agency Standing Committee-mandated lead agency on gender-based violence in emergencies leading the Gender-based Violence Area of Responsibility (GBV AoR), the global-level forum for coordination on gender-based violence prevention, risk mitigation and response in humanitarian settings

In its efforts to end gender-based violence, UNFPA works towards changing harmful social and gender norms that perpetuate gender inequality. For example, UNFPA works with men and boys to promote positive masculinities with the aim of securing gender equality and ending violence and harmful practices against women and girls while being accountable to feminist movements.

UNFPA also uses comprehensive sexuality education as a primary prevention strategy to end gender-based violence, since it helps adolescents to nurture positive gender-equitable attitudes and values, which are linked to reduced violence, and healthier, equitable, non-violent relationships. This early intervention can have long-lasting impacts across the lives of women and men.

Gender-based violence is a human rights violation and is the result of structural, deep-rooted discrimination, which requires legislative, administrative and institutional measures and reforms, including the eradication of gender stereotypes.

UNFPA supports governments in the implementation of international agreements including the International Conference on Population and Development (ICPD), the Sustainable Development Goals (SDGs), the 2030 Agenda, the Convention on the Elimination of All Forms of Discrimination against Women (CEDAW) and the Beijing Platform for Action. UNFPA has contributed to strengthening national policies, accountability frameworks and legal normative frameworks, including laws on gender-based violence.

UNFPA also works extensively in collecting data and generating evidence to understand the prevalence, incidence and impact of gender-based violence worldwide. For example, in 2016, UNFPA and the Australian Department of Foreign Affairs and Trade launched the kNOwVAWdata initiative in the Asia Pacific region. With support from the Joint EU-UN Spotlight Initiative, UNFPA has now scaled up the kNOwVAWdata initiative into a further three regions. This initiative provides quality technical support and capacity building for the ethical collection of evidence, as well as support in translating these data into evidence-based policies.

UNFPA also supports the Gender-Based Violence Information Management System (GBVIMS), which is used in crisis settings, and an adapted version of this system for development settings (GBVIMS+). These systems enable the safe collection, storage, analysis and sharing of data reported by survivors.

UNFPA is also a partner in the UN Trust Fund to End Violence Against Women, a global grant-making mechanism that invests in initiatives by civil society organizations from around the world and that are aimed at ending gender-based violence through prevention, law and policy implementation and access to essential services for survivors. And UNFPA co-leads, with UNICEF, the Joint Programme to End Female Genital Mutilation/Cutting and the UNFPA-UNICEF Global Programme to Accelerate Action to End Child Marriage.

“Men will no longer do what they want with them”: Indigenous women in Brazil say enough to gender-based violence

How one woman in Gaza triumphed above marital violence, and cancer, to inspire other survivors

The designations employed and the presentation of material on the map do not imply the expression of any opinion whatsoever on the part of UNFPA concerning the legal status of any country, territory, city or area or its authorities, or concerning the delimitation of its frontiers or boundaries. Due to coding limitations the wording across the indicators is standard, both in the global page and the individual country pages. The wording is applied homogeneously to all reporting offices and is by no means an endorsement or statement of recognition of sovereignty. A dotted line represents approximately the Line of Control in Jammu and Kashmir agreed upon by India and Pakistan. The final status of Jammu and Kashmir has not yet been agreed upon by the parties.

A dispute exists between the Governments of Argentina and the United Kingdom of Great Britain and Northern Ireland concerning sovereignty over the Falkland Islands (Malvinas).

The boundaries and names shown and the designations used on this map do not imply official endorsement or acceptance by the United Nations.