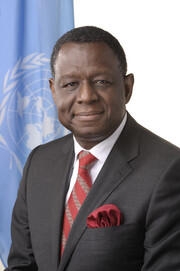 Dr. Babatunde Osotimehin, passed away suddenly during the evening of 4 June 2017 in his home in West Harrison, New York. Born on 6 February 1949, the 68 year-old Nigerian was a physician and global leader of public health, and the empowerment of women and young people, with a strong focus on promoting human rights in population and development. 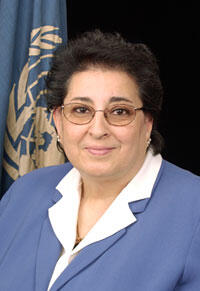 Thoraya Ahmed Obaid was appointed as Executive Director of UNFPA on 1 January 2001, making her the first Saudi Arabian to head a United Nations agency.

Ms. Obaid had a long and distinguished career at the United Nations. She worked for the Economic and Social Commission for Western Asia (ESCWA) from 1975 to 1998, where she rose to the rank of Deputy Executive Secretary. In 1998, she moved to UNFPA as Director of the then-Division for Arab States and Europe, occupying that position until 2001, when she became Executive Director, a post she held through 2010.

Ms. Obaid is the first Saudi Arabian woman to receive a government scholarship to a university in the United States, in 1963. She has a doctorate degree in English Literature and Cultural Anthropology from Wayne State University, Detroit, Michigan.

Ms. Obaid has received many awards and honours. She was ranked among the 50 Most Powerful Arab Women by Forbes magazine in 2004. She is also profiled as one of 100 Muslim Builders of World Civilization and Culture in Notable Muslims, a book published in Oxford, England, in 2006.

Throughout her career, Ms. Obaid has championed the causes of women's and young people's health and empowerment. Her work focuses on supporting governments to establish programmes to empower women and develop their capacities as citizens with rights and responsibilities. She has also emphasized the importance of promoting development through a culturally sensitive approach, working within the context of each society, and taking into consideration cultural values and religious beliefs that shape people and affect their actions. As UNFPA Executive Director, she introduced a focus on culture to the Fund's development work, linking gender, universal values of human rights and values of the human worth promoted by all religions and found in all cultures.

Ms. Obaid is married and has two daughters. 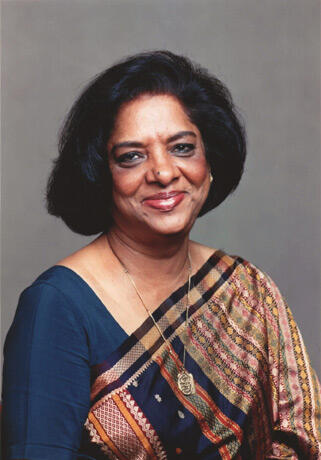 Dr. Nafis Sadik, Special Adviser to the UN Secretary-General and his Special Envoy for HIV/AIDS in Asia and the Pacific, served as Executive Director of UNFPA, with the rank of Under-Secretary-General, from 1987 through 2000.
On her appointment in 1987, she became the first woman to head one of the United Nations' major voluntarily-funded programmes.
Dr. Sadik has consistently called attention to the importance of addressing the needs of women, and of involving women directly in making and carrying out development policy. This is particularly important for population policies and programmes.
In June 1990, the Secretary-General of the United Nations appointed Dr. Sadik Secretary-General of the International Conference on Population and Development (ICPD), 1994. On the Conference, Dr Sadik has said:
"When the essential needs of the individual are addressed, those of larger groups--the family, the community, the nation and indeed the planet are more likely to be kept in the right perspective. One of the challenges to the Conference is to find the balance between individual rights and responsibilities on the one hand, and the rights and obligations of the wider society on the other."
A national of Pakistan, Dr. Sadik was born in Jaunpur, India, the daughter of Iffat Ara and Mohammad Shoaib.
Dr. Sadik's contribution to improving the health of women and children of the global community has brought her many international awards and honours.
She is a member of the Board of Governors of the Foundation for Human Development, and a member of the South Asian Commission on the Asian Challenge. Dr. Sadik was the President of the Society for International Development (SID) for the period 1994-1997.
Dr. Sadik has written numerous articles for leading publications in the family planning, health, and population and development fields, and edited several books, among them: Population: The UNFPA Experience (New York University Press, 1984), Population Policies and Programmes: Lessons Learned from Two Decades of Experience, (New York University Press, 1991), and Making a Difference: Twenty-five Years of UNFPA Experience, (Banson, London, United Kingdom, 1994).

Rafael Montinola Salas
(7 August 1928–3 March 1987)
Rafael Montinola Salas was the first Executive Director of UNFPA, the United Nations Population Fund, and headed the fund from the time it became operational in 1969 until his untimely death on 3 March 1987. Under his leadership, UNFPA grew from a small trust fund into the world's largest multilateral provider of population assistance. Mr. Salas was a pioneer in the field of population. Indeed, he was one of its first true international advocates, conveying to others the importance of understanding the crucial links between population and development and the need to take population factors into account in development planning.
Mr. Salas was born in Bago, Negros Occidental, in the Philippines on 7 August 1928. He graduated with high honours from the University of the Philippines in 1950, completing his B.A. (Magna Cum Laude) and LL.B (Cum Laude) both in 1953. He then attended Harvard University, where he obtained a Master in Public Administration in 1955. Upon graduation, he returned to the University of the Philippines where he occupied a variety of academic positions until 1966.
In 1966, Mr. Salas was called on to serve his country as Executive Secretary of the Republic of the Philippines under then-President Ferdinand E. Marcos. During his tenure as Executive Secretary, he was credited with solving the country’s annual rice production problem as action officer of the National Rice Sufficiency Programme.
From 1962 to 1969, Mr. Salas was a member of various Philippines delegations to international conferences, the United Nations General Assembly. He headed the Philippines delegation to and was Vice-President of the International Conference on Human Rights, held in Teheran in April-May 1968. It is the conference that proclaimed: "Parents have a basic human right to determine freely and responsibly the number and the spacing of their children."
Mr. Salas stepped down as Executive Secretary in 1969 and accepted to be the first Director of the United Nations Fund for Population Activities, now known as the United Nations Population Fund.
Rafael Montinola Salas died on 3 March 1987 in Washington, DC. while still serving as UNFPA Executive Director.
Mr. Salas received many honorary degrees and academic awards from around the world for his work and dedication in the field of population.
Mr. Salas' efforts to create global awareness and consensus about the importance of population to social and economic development earned him the title of “Mr. Population” by the international community. He also contributed a huge body of literature on government management and population issues to numerous scholarly journal, magazine and newspaper articles.
The Rafael M. Salas Memorial Lectures
To honour his legacy, UNFPA has established the Rafael M. Salas Memorial Lecture series that provide a unique forum for distinguished guest lecturers to discuss important aspects of population and development. The first lecture, in 1989, was delivered by Saburo Okita, former Foreign Minister of Japan, on Population and Development.
Subsequent lectures have been delivered by:
Prince Philip, the Duke of Edinburgh, on Population and Nature;
Robert S. McNamara, former President of the World Bank, on A Global Population Policy to Advance Human Development in the 21st Century;
Captain Jacques Cousteau, on The Greatest Adventure of All Time;
Gro Harlem Brundtland, former Norwegian Prime Minister, on Population, Environment and Development;
Fidel V. Ramos, former President of the Philippines, on Globalization, Population Policy and Democratic Development: Imperatives in Nation Building;
Jeffrey D. Sachs, Special Adviser to the Secretary-General on the Millennium Development Goals, on Population, Reproductive Health and the Millennium Development Goals; and
Dr. Nafis Sadik , Special Envoy on HIV/AIDS in Asia-Pacific, on To the Summit and Beyond - Gender Equality, Reproductive Health and the MDGs.
Nicholas D. Kristof, Pulitzer Prize-winning journalist and New York Times columnist, on The Greatest Challenge in the 21st Century:
Gender Equality in Development.
Gertrude I. Mongella, President of the Pan-African Parliament and World Health Organization's Goodwill Ambassador for Maternal and Newborn Health in the Africa region.
The Lecture is held at United Nations Headquarters, New York.