The world is undergoing the largest wave of urban growth in history. More than half of the world’s population now lives in towns and cities, and by 2030 this number will swell to about 5 billion. Much of this urbanization will unfold in Africa and Asia, bringing huge social, economic and environmental transformations. Urbanization has the potential to usher in a new era of well-being, resource efficiency and economic growth. But cities are also home to high concentrations of poverty. Nowhere is the rise of inequality clearer than in urban areas, where wealthy communities coexist alongside, and separate from, slums and informal settlements. UNFPA works with partners in government, the UN system and civil society to advocate for the welfare and sustainability of rapidly urbanizing communities. UNFPA’s works includes ensuring people’s access to essential services, particularly sexual and reproductive health care, as they move to and live in urban areas.

Today, population growth largely means urban population growth. UN projections show the world’s rural population has already stopped growing, but the world can expect to add close to 1.5 billion urbanites in the next 15 years, and 3 billion by 2050. How the world meets the challenge of sustainable development will be intimately tied to this process.

A world of opportunity

For many people, cities represent a world of new opportunities, including jobs. There is a powerful link between urbanization and economic growth. Around the world, towns and cities are responsible for over 80 per cent of gross national product. While urban poverty is growing around the world, this is largely because many people – including the poor – are moving to urban areas.

The opportunities there extend beyond just jobs. Cities also offer greater opportunities for social mobilization and women’s empowerment. Many young people, especially young women, regard the move to cities as an opportunity to escape traditional patriarchy and experience new freedoms.

The urbanization process – which is particularly pronounced in Africa and Asia, where much of the world’s population growth is taking place – is also an enormous opportunity for sustainability, if the right policies are put in place. Urban living has the potential to use resources more efficiently, to create more sustainable land use and to protect the biodiversity of natural ecosystems.

Still, the face of inequality is increasingly an urban one. Too many urban residents grapple with extreme poverty, exclusion, vulnerability and marginalization.

Urban land is expanding much faster than urban population, a phenomenon known as urban sprawl. It is driven in part by increasing urban land consumption by the wealthy and the increasing separation of rich and poor communities within cities. Sprawl undermines the efficiencies of urban living, and it marginalizes poor people in remote or peripheral parts of cities, often in dense informal settlements or slums.

This phenomenon can eliminate the very opportunities people seek when they move to cities. Many people in slums lack ready access to health facilities. Others rely on private, unregulated providers for health services that are free in rural areas. In some urban slums, poor women have fertility rates closer to those of rural women. The urban poor also face risky and unhealthy living conditions, such heavy pollution or high vulnerability to disasters.

The total estimated number of slum dwellers is rising – from over 650 million in 1990 to about 863 million in 2012. Almost 62 per cent of the urban population in sub-Saharan Africa lived slums in 2010, the highest proportion of any region. But slum growth is not the same as urbanization. Most evidence suggests that global urbanization is an inevitable trend, while slum growth results from the decisions to limit poor people’s access to cities, through limited service provision to informal settlements or by forced evictions and resettlement of the urban poor to peripheral or under-serviced areas.

UNFPA works closely with the International Institute for Environment and Development to promote social inclusion and the realization of human rights in the context of urbanization. UNFPA also supports the development of a new urban agenda through the Habitat III conference taking place in 2016.

And in partnership with UN-Habitat, UNFPA works to support sexual and reproductive health in urban slums, to build the capabilities of young people in the urbanization process, to promote gender equality and the elimination of gender-based violence among urban residents, and to support data-gathering about their needs and vulnerabilities.

How Has the World Changed in the Last 20 Years? 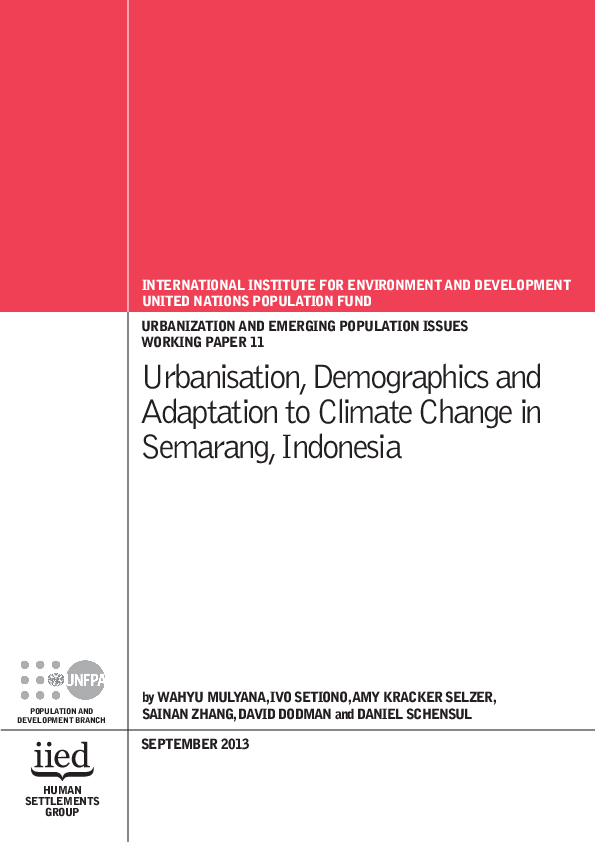 Urbanisation, Demographics and Adaptation to Climate Change in Semarang, Indonesia