BRUSSELS -- In a recent meeting at the Belgian Parliament, a Goodwill Ambassador for the United Nations Population Fund (UNFPA), Face to Face Spokesperson and popular television personality, Goedele Liekens, urged parliamentarians to become even more active on HIV/AIDS issues in Africa and to strengthen development policies that concretely address the crisis. 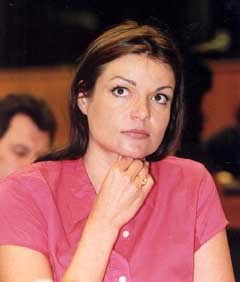 Speaking about the devastating consequences of the epidemic that she has witnessed during her visits to Africa, Ms. Liekens appealed to her country's parliamentarians to take additional concrete action to fight the spread of HIV/AIDS by, among other things, raising the Belgian budget for development cooperation to 0.7 per cent of the gross national product (GNP).

During her presentation, Ms. Liekens focused on Botswana, a country where about 35 per cent of the population is HIV-positive and 55,000 children have been turned into orphans by the disease. Ms. Liekens also discussed the importance of recognizing the many layers of the issue, including the social constructs that help the spread of the deadly virus. The women of Botswana, as in many parts of the world, she said, appeared to be more vulnerable to HIV infection partly because of their powerlessness.

Ms. Liekens screened her recent documentary, Staphie, a heart-breaking film about the challenges faced by a young HIV-positive mother in Botswana, with two young daughters, Charity and Veronica, both of whom are living with the virus. Staphie's third child tragically died of AIDS at the age of 6 months.

In a separate development a few days after the meeting, the Belgian State Secretary announced that the Belgian budget for development aid would not only increase by 47 per cent over the next three years, but that the Government also took the decision to reach the 0.7 per cent of the GNP goal by the year 2010.