BRUSSELS, Belgium/UNITED NATIONS, New York – For more than 15 years, Goedele Liekens has served as a UNFPA Goodwill Ambassador, advocating for better access to sexual and reproductive health information and care.

A psychologist, sexologist and well-known television personality in Belgium, Ms. Liekens has made a number of documentaries on UNFPA's key issues – including the needs of refugee women, the tragedy of obstetric fistula, and the HIV epidemic. She is perhaps best known for her work promoting comprehensive sexuality education as an essential part of education.

Through her work with UNFPA, she has traveled all over the world to meet women and girls, including Afghanistan, Botswana, Nigeria and, most recently, Ethiopia. In 2010, she was appointed a Millennium Development Goal Champion by Secretary-General Ban Ki-Moon.

Today, on the International Day of the Girl Child, Ms. Liekens reflects on how conditions have improved for girls’ health and rights over the last 15 years – and how much work still has to be done. 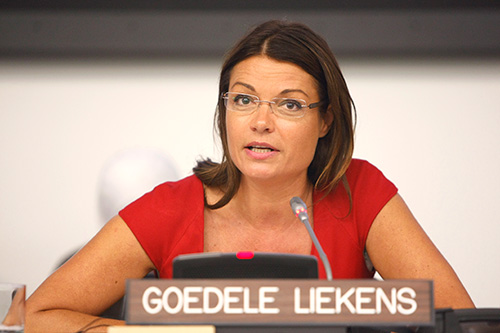 You joined UNFPA as a Goodwill Ambassador just before the Millennium Development Goals were adopted in 2000. What results have you seen in the past 15 years?
I’ve travelled to a lot of countries, and I have seen that we have really changed a lot of things for the good since 2000 – things like female literacy and lifting people out of poverty. And for the goals related to sexual and reproductive health, things have really improved. One of the nicest results I’ve seen lately was in Ethiopia, where they have made great progress in the fight against female genital mutilation (FGM). It’s gone from 90 per cent of girls being cut in certain areas down to less than 10 per cent. These kinds of examples we can find all over the world. We have seen that things can change for the better. It just takes a little energy and a little money – not even that much!

Are there things that haven’t improved? What are the biggest challenges that girls face when it comes to realizing their sexual and reproductive health and rights?
For me, the big issue that still needs to be addressed is unplanned pregnancies. I think that you should get pregnant – as we always say – by choice, not by chance. That’s a really important thing, for the personal development of both the mother and the child. This is a much broader issue than simply the number of children a woman has. The impact of having unplanned pregnancies is huge on a personal level, but also on a social and psychological level for a society as a whole. For the well-being of women and girls everywhere, it’s so important to stop it.

Why is it important to empower girls and young women from an early age, informing them of their sexual health and reproductive rights?
For me, this question is as fundamental as asking why is it important to eat and drink. Girls are the key to sustainable development. Girls are the ones who are going to educate tomorrow’s leaders, and they are the ones who are in charge of changing the world. So we need to educate girls, and they have the right to make their own informed decisions. This is a crucial matter.

We can’t do it on our own, and men are not our enemies. On the contrary, it’s just that they often don’t have the right information. If we inform the men, then most of them will say, “Well, let’s give girls all the education they need.” If we don’t involve them, then it’s as if we’re working against them, and that’s exactly the opposite of what we want to achieve. We want gender equality. We don’t want equality to go in reverse and defeat itself.