The time is now: A call to end female genital mutilation, child marriage and son selection by 2030

UNITED NATIONS, New York – “When I was 12-years old, my family organized a ceremony to transition my sisters and myself to become women,” says Kakenya Ntaiya, a member of Kenya’s Maasai ethnic group. “I was first because I was the oldest. I was told to open my knees, so I opened them. A woman grabbed my clitoris and cut it off. I bled. I fainted. But I am so lucky I am alive, because so many girls die from this.”

She says she had no idea that the ceremony would include female genital mutilation (FGM) – until after the woman made the cut.

While still a teenager, India’s Monica Singh had the courage to stand up for her rights and say no to a marriage proposal from an older man. However, she paid a high price for claiming control of her future. After the rejection, the man tried to intimidate her to into marrying him by repeatedly stalking and harassing her on her way home from school.

Then one day he blocked her path completely. 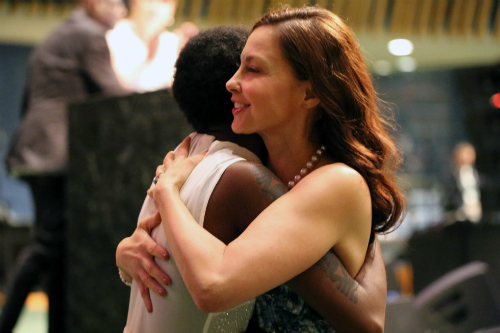 “Before I knew it, a bucket of acid was thrown on me,” she says. “All I could feel was searing pain. Ninety per cent of my body had no skin left, and 65 per cent was permanently disfigured. I had to undergo 46 surgeries and be fed through a straw for more than a year of my life.”

Sheilla Akwara was born into Kenya’s Teso ethnic group. In Teso villages, the birth of a boy is greeted with four ululation calls and the birth of a girl with three, because boys are considered “permanent” and girls “temporary.”  “Having a girl in the household is almost a curse – you need deliverance from it,” she says.

One day, while she was still a child, Sheilla climbed a hill and saw a woman being beaten by a mob. To her horror, she realized the woman was her mother. “They were beating her like she was an animal. They were trying to make her have boys,” says Sheila, who has two sisters and no brothers.

After that, the violence against her mother and harassment and threats against her and her sisters only increased. “It became too much. Son preference is the reason why, at age 15, I attempted suicide,” she says. “But I am still here. Clearly, God had other plans for me.”

Yesterday, Kakenya, Monica and Sheilla stood at a podium in the United Nations General Assembly Hall and told their stories to a crowd of hundreds, including ministers, secretaries of state and participating celebrities, during a Commission on the Status of Women (CSW), The Times is Now!, on ending these three harmful practices.

“What I think we at the United Nations are trying to do for girls is create a safe space in which we can move with freedom, without constraint, with bodily integrity, with sexual autonomy, with economic empowerment and with mental freedom and spiritual wisdom,” said actor and activist Ashely Judd, UNFPA’s new Goodwill Ambassador, during the event. “That’s what we are doing when we end these harmful practices.”

Globally, over 200 million girls living today have suffered FGM. Each day, 37,000 girls under age 18 are forced into child marriage, and in developing countries, 1 in 3 girls is marred before age 18, and 1 in 9 before age 15.

Across Asia, an estimated 117 million women are missing, either through prenatal sex selection or death from neglect, due to a cultural preference for sons. Millions of additional girls in other regions have also suffered abuse, like Sheilla, died, or never been born because of son preference. 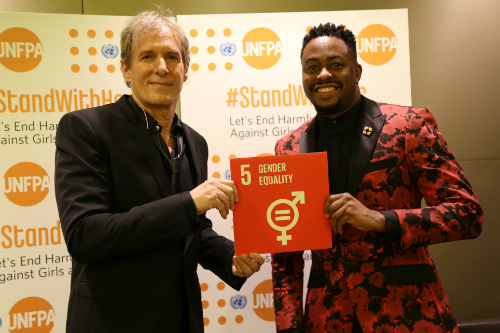 Grammy-winning artist Michael Bolton (left) and grammy-nominated artist Raheem DeVaughn were among the musical guests who performed during the event. © UNFPA/Runa A

Last September, the 193 countries of the UN General Assembly adopted the Sustainable Development Goals (SDGs), which include achieving 50/50 gender parity and ending harmful practices against women and girls by 2030. This CSW marks the first since the SDGs were set, and during the Commission, there has been a groundswell of support and activity towards achieving that critical commitment.

On 15 March, UNFPA and UNICEF held a standing-room only side event launching their new joint Global Programme to Accelerate Action to End Child Marriage, which was first announced last week on International Women’s Day. In conjunction with CSW and in support of the SDGs, U.S. Secretary of State John Kerry announced a new U.S. Global Strategy to Empower Adolescent Girls. In addition, these devastating practices have been cited as a top action priority again and again during the Commission’s diverse panels and events.

Globally, awareness and national action to stop FGM, child marriage and son preference is also increasing, in no small part due to the heroic efforts of impacted girls and young women like Kakenya, Monica and Sheila.

Education is the key to change

All three say the key factor that transformed their lives after their trauma and empowered them to lead the charge for change was education.

“My mother tells stories about how she had to walk to school barefoot, and she says that education is what got her out,” says Sheilla, who is currently getting her master’s degree in international affairs and development. “Education, education, education.”

After suffering FGM, Kakenya was slated to marry a man to whom she had been engaged since the age of five. “I threatened to my father that I would run away unless he let me go back to school,” she says. “And he let me. Because of that decision, my life changed forever.” In 2009, Kakenya opened a school in her village that educates girls about their rights and the risks associated with FGM and child marriage.

After her lengthy recovery, Monica re-enrolled in school, and later, with the support of her family, started a foundation dedicated to helping women and girls overcome obstacles to achieving their full potential. “I hope my life is an example for young women around the world,” she says. “An example that despite all the odds against women, it is possible to dream. It is possible to fight. To be the change. The time is now.”