UDAIPUR district, India – In India, 47 per cent of women ages 20-24 married before they were 18. In rural, tribal regions of Udaipur district, the rate of child marriage is 56 per cent. Few of the area’s girls are enrolled in school, and most are expected to work on their homes and land from dawn to dusk – like their mothers and grandmothers before them.

Globally, approximately 15 million adolescent girls marry before turning 18 each year, and over 7 million babies are born to adolescent mothers in developing countries. These girls are much more likely to experience gender-based violence and die in childbirth and much less likely to receive an education than women who marry and have babies after age 20.

The theme of International Women’s Day 2016, on 8 March, is Planet 50-50 by 2030: Step It Up for Gender Equality. And a critical step to achieving that 50-50 gender parity is empowering adolescent girls to stay in school, know their rights and decide for themselves when, and to whom, they will get married.

This International Women’s Day, UNFPA is launching a new multimedia feature Passage to Change in India, chronicling the positive impact the UNFPA-supported initiative Action for Adolescent Girls is having on girls living in remote tribal hamlets of India’s Udaipur district.

In addition, UNICEF and UNFPA are launching a joint program to end child marriage this 8 March. The programme aims both to prevent child marriage and empower girls who are already married, and it plans to reach 6 million vulnerable girls from 12 countries, including India, in the first four years. 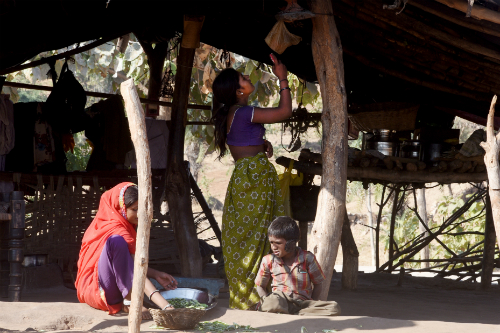 “Child marriage is an appalling violation of human rights and robs girls of their education, health and long-term prospects,” says UNFPA Executive Director, Dr. Babatunde Osotimehin. “A girl who is married as a child is one whose potential will not be fulfilled.”

The population of the hilly, desert district of Udaipur is 50 per cent tribal, 80 per cent rural and 47 per cent below the poverty line.

Like many people in the area, Badri, an adolescent girl, lives in a one-room house without a toilet or running water. But she considers herself lucky, because six kilometres from her village is a pond that fills with rain water four months out of every year. However, finding time for the long walk is never easy, and most of the time she has no option except to bath at the community well – with the whole village staring.

This situation grows increasing awkward, and even dangerous, as unmarried girls like Badri reach adolescence. And many parents and village elders consider keeping girls confined, then marrying them off a means of protecting them. Plus, the practice is the result of centuries of tradition.

“Working in these areas is not easy, as there are many geographical and cultural barriers to overcome,” says Frederika Meijer, former UNFPA representative in India and Bhutan, who helped implement the programme. “But, as the old saying goes, where there is a will, there is a way.”

In 2014, UNFPA launched Action for Adolescent Girls, a 12-country initiative aiming to empower some of the world’s most marginalized adolescent girls, in partnership with the UN Foundation. And after just two years, the initiative is having substantial and concrete impact in Udaipur. Adolescent girls in remote hamlets across the district are standing up and demanding change – and their communities are listening. Find out more here.