Midwives on the frontlines of fighting maternal death in Somalia

LOWER SHABELLE, Somalia – Nine years ago, Maymuun Abdullahi Nur’s mother died giving birth to her eighth child, during a delivery attended only by an untrained traditional birth attendant. Just 13 at the time, Maymuun was struck with a conviction that the postpartum haemhorrage that killed her mother could have been stopped and that her mother could have lived to meet the newborn baby, the family’s first son, and to see Maymuun and her six sisters grow up.

It was not the first time Maymuun had seen this kind of preventable tragedy occur in her village in Somalia’s Lower Shabelle region – a rural area in the south of the county that has been plagued by conflict for twenty five years, and where residents have little access to modern health care services. And so Maymuun made a decision about the course of her life that terrible day.

“I decided there and then that I would train to help save the lives of women in rural areas,” she says.

And she has stuck to her vow. This fall, after graduating with high marks from an 18-month program at the Mogadishu Midwifery School, which is supported by UNFPA, Maymuun, now 22, returned home to Lower Shabelle and has been a practicing midwife there for five months.

“I am glad that my dream has now come true, and I am now helping women give birth safely,” she says.

Today, 5 May, marks the 26th-annual International Day of the Midwife. Since the day was first observed in 1991, the world has nearly halved its rate of maternal deaths; however, every year, approximately 300,000 women still die during pregnancy and childbirth, and almost 3 million babies do not survive their first four weeks of life.

But this doesn’t have to remain the case. Approximately two-thirds of these deaths could be averted by increasing the size of the world’s force of midwives.

A country in need of maternal care

As a result, only 22 per cent of the need for skilled birth attendants is met nationally, and at one in 22, women in Somalia have the world’s third-highest chance of dying during childbirth. Family planning services are sparse to non-existent throughout the country, and only 6 per cent of women have access to modern contraceptive methods, preventing most women from controling the timing and spacing of their children. 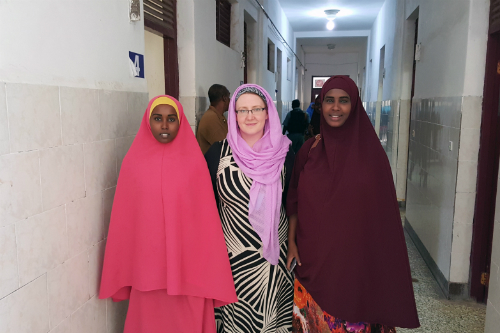 In addition, 97 per cent of Somali women and girls are subjected female genital mutilation, a human rights abuse that is not only psychologically traumatizing to the girls and women who suffer it, but that also greatly increases their chances of complications and death during childbirth.

“There are many factors in maternal deaths in Somalia, but the key factor is the lack of births attended by a midwife or doctor,” says Emily Denness, UNFPA’s midwifery advisor in Somalia. “That is the big challenge in Somalia.”

Midwives as the backbone of sexual and reproductive health

UNFPA has been working to train midwives in Somalia since 2008, and is currently supporting trainings in 15 schools across the country. While it is difficult to track the exact number of midwives active in the country, Denness estimates there are now over 1,000 trained midwives deployed in villages and urban areas nationwide.

And they are starting to have an impact.

“Women are beginning to recognize that it can be dangerous to have births attended just by uneducated traditional birth attendants, and the demand for midwives services is increasing,” says Denness.

And the midwives contribution to sexual and reproductive health in the country doesn't stop there. They are also trained in how to prevent the practice of female genital mutilation in the communities they serve and to talk to the women about their family planning options and their overall sexual and reproductive health, often offering women this information for the very first time.

As the presence and of midwives increases, maternal death in Somalia is decreasing. Between 2010 and 2015, the maternal mortality ratio dropped from 820 maternal deaths per 100,000 lives births to 732 deaths, and it has declined from 1210 per 100,000 since 1990. But that ratio is still among the world's highest, and the country needs many more trained and active midwives to ensure all Somali women have access to quality care.