In April, humanitarian, writer and actor Ashley Judd travelled to Jordan on her inaugural mission as UNFPA Goodwill Ambassador. During her two-week trip, she visited UNFPA-supported clinics and programmes for women and girls, including refugees who have fled the violence in Syria, throughout the country. She also met with international dignitaries, including Alice G. Wells, U.S. Ambassador to Jordan, and Jordan’s Princess Basma. Below are excerpts from her written and video diaries of her mission.

Jordan is lovely. Looking out the window while landing, I saw the desert stretching as far as my eyes could see, its terrain gently marked by gatherings of low hills and folds of sand, like skin.

Jordan is currently hosting over 635,000 refugees from Syria.

Rates of maternal death greatly increase during refugee and other humanitarian crises, but despite these risks, in March, the 5,000th newborn was safely delivered in a UNFPA-supported clinic in Zaatari refugee camp. Her name is Rima. I met with her young parents, ages 20 and 21, who named her after the doctor who delivered her.

I wondered what it would be like to thank the Jordanians for accepting refugees, so, today, I tried it. It was special. It’s something I will continue to do. The exchange was brief, their responses modest, mute even, but the air contained an acknowledgement.

In this video, Ashley visits a small store located in a shopping strip in Zaatari camp known as the Champs-Elysées. © UNFPA

At the Women’s Comprehensive Centre, Zarqa, health workers tell me the story of a refugee patient. I listen, eyes closed, picturing this woman, who had been able to be here, in this safe space, for a moment at least, and to receive sexual and reproductive health services and tell her story.

Her husband, who is not allowed to work here in Jordan, is despairing, depressed, angry. He takes it out on her, beating her.

She was as an underage “bride”, and she had no rights. It was a religious marriage, not a civil one, and therefore is not recognized as legal or illegal. Now divorced, her status is even worse. The divorce is comprised of the man saying it is so, three times.

After that, I meet Aida, who is using an alias for safety.  She tells me the following:

“In Syria, I was a nurse. I used to work in a hospital in eastern Damascus. I’d just gotten off the night shift when the attack happened on 21 August, 2013. News reports say that gas rockets were fired. My son called out to me. He couldn’t see. I noticed a faint smell and saw that my son’s eyes had turned white. I rushed him to the hospital.”

There, Aida found hundreds of victims and volunteered to help. “That day, I prepared the bodies of children for burial,” she says.

Aida and her family fled Syria. She began art and drama therapy classes at Al Marj Women’s Center. “I have to be strong. It’s the only way I can support my children,” she says. Soon, she became a UNFPA outreach volunteer for the centre, identifying women who could benefit from the medical, psychosocial and vocation services provided there.

At night, seated at a gleaming, wide table in Amman, ten women and I shared our stories, ourselves. There is no difference between us, really. We seek to tend and befriend. We need to be heard and witnessed. We share struggles of isolation and personal disbelief. 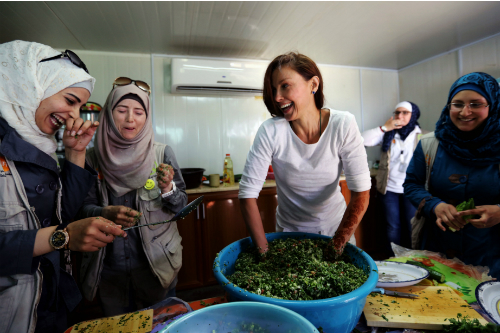 I visit an intimate partner violence group at the Jordanian Women’s Union (JWU), which is supported by UNFPA. Gender-based violence is common in Jordan, and during the group, I hear the same story we study, tell and address in the U.S. It usually begins with control: He controls where she goes, who she sees, if she works, her finances, her telephone calls. Every single woman in the group tells that story. Every. Single. One.

One mother passionately conveys her story, crying, as others in the room weep their own tears. Later, she speaks up again, and explains that a small woman seated three chairs down is her daughter.

She married her off when she was only 17 (16 is legal age to marry in Syria), and her husband began immediately to beat her. The daughter tells the story with her body, through nods or eyes filling with tears or head dropping to her chest or, finally, her gaze coming up and out, with hope. “My husband, he beat me, and so did his family,” she says. “My mother-in-law, she would scream at me, ‘Do not look me in the eye. You must look at my feet. Do not lift your head.’”

After the group session, I meet a woman sitting in the centre who had been forcibly trafficked. She is catatonic.

Her face is grossly swollen, and I am told that the police brought her here yesterday, rescued, obviously, from some incredible hell.

I leave to have a lunch prepared by gender-based violence survivors who make and sell up to 200 meals a day. The fabulous cafe is one of two income-generating businesses at JWU.

After the delicious meal, I return to visit the recently rescued woman, who is now moving her eyes a little, seemingly registering and observing the room. 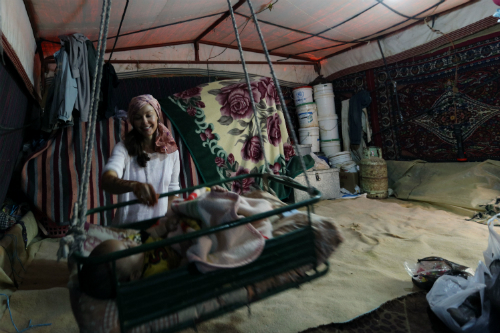 Ashley spends time with a Syrian refugee family living in a tent in Deir Alla in Jordan Valley. The mother is a client at the local UNFPA-supported reproductive health clinic. © UNFPA Jordan/Mohammad Abu Ghosh

The most stunning experience of my immersion into the world of Syrian refugees in Jordan is not the vastness of their suffering. It is not the approximately 635,324 iterations of their story of besiegement, bombardment, chaos, family displacement, injuries, terror, the high-jacking of their religion, the flight. It is not the hundred ways they are processed and settled into camps or host communities.

The most stunning experience of my immersion is the love they have given me, consistently, uniformly, sweetly and ceaselessly.

Today, I attended a play, performed by the mentors from the Questscope youth centre, which is supported by UNFPA. And it was brilliant. It begins with a beleaguered daughter doing housework. When her parents wake up and stroll into the kitchen, it is clear what the expectations are: They sit, enjoy coffee, dad reads, mom curries dad’s favor, daughter works and disappears.

Then the boys wake up. Dad transforms, suddenly taller, proud. They effortlessly extract money from him, one even boldly pulling a few extra bills from his stash.

You get the idea. Gender violence in the form of son preference is alive world-wide. From allocating resources for boys and withholding them from girls to prenatal sex selection and the death of neglected infant girls, son preference has contributed to 117 million women missing today in Asia alone.

And girls who survive are vulnerable to sexual assault, child marriage, lack of schooling, female genital mutilation and other practices.

As the play rushes towards an emotional ending, it shows how this division by gender, and the violence against the women in the family, forces each member to live in haunting isolation.

I gave them a standing ovation. 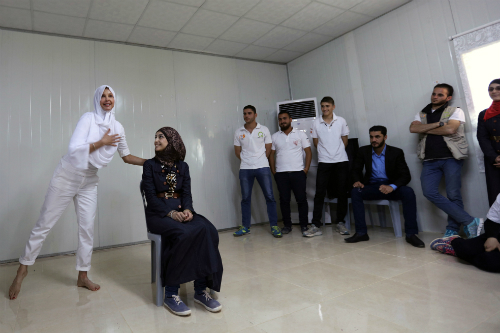 After watching their play about gender inequality, Ashley gives feedback and some acting tips to mentors at the Questscope youth centre. © UNFPA Jordan/Mohammad Abu Ghosh

Azraq refugee camp was built in the middle of nowhere. It is all blank tan earth reaching into the far distances and low blue sky. It is enclosed by chain link fence and, in places, barbed wire. Row after row after row of small white tin huts skip past the eye, like corn in an Iowa field in summer. Some families have put up bits of tent between their huts to break the wind.

The maternity ward at Azraq has three mothers who have delivered today, two vaginal, one Caesarean. One baby is sleeping. One baby is crying. One baby has been transferred to a hospital, requiring even more sophisticated care than this very well-provisioned UNFPA-run hospital can provide.

Mother one is exhausted. She is wearing a dusty black abaya. The next mom is peppy.  The third mother has had the C-section.

The fact that the clinic can do this is a real tribute to UNFPA and its determination to provide everything war-displaced mothers and families need. The grief in the mother’s eyes reaches out to me. Her tears come as I sit at her bed, and when I gently rest my hand on her head, she holds it in place.

Next we visit a UNFPA Safe Space for mothers and children at the camp. It contains a brightly coloured painting studio caravan that has quite amazing art on the walls and piles of leaning canvases.

One painting is of a large group of figures crowded into an overwhelmed boat. Behind them is the open jaws of a large shark. Ahead of them is lovely scene, a beach with trees, but upon closer look one sees the beach is laid with tightly coiled barbed wire.

The painting was done in a psycho-social support group. 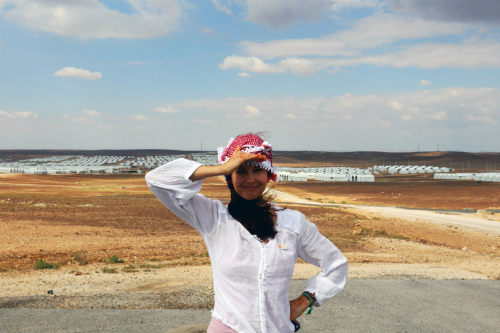 Stepping out of the art studio, I am surrounded by a swarm of children. There is vibrant energy here in the Safe Space, and kids are roaming, playing, gathering. Some have sunburnt cheeks.

After we leave the camp, driving down a ring road, suddenly, a girl runs in front of the truck, hysterical. We stop. The girl is 15. She has been married one month, and she is running away from her mother- and sisters-in-law. They were beating her while her husband was out. She saw our truck and hoping for help, ran in front of it.

UNFPA’s Eman, who has been showing me around the camp, takes her to a Protective Service within Azraq, where she is assisted in making a report.

From there, she takes her to UNFPA’s Safe Space for girls and women. 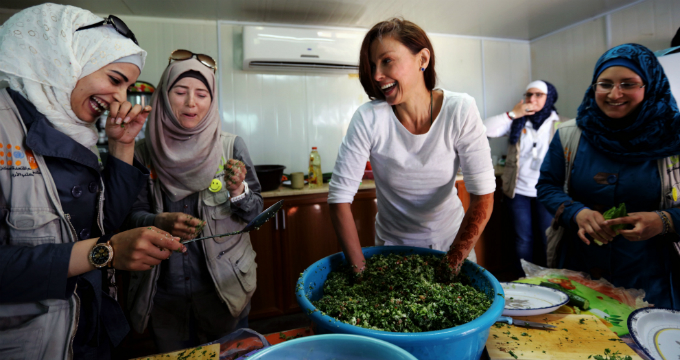