UNFPA works in more than 150 countries and territories that are home to the vast majority of the world’s people.  Its mission: to ensure that every pregnancy is wanted, every childbirth is safe and every young person’s potential is fulfilled.

Guided by the 1994 Programme of Action of the International Conference on Population and Development (ICPD), UNFPA partners with governments, civil society and other agencies to advance its mission. The ICPD Beyond 2014 Global Report, released in February 2014, revealed how much progress has been made and the significant work that remains to be done. The actions and recommendations identified in the report are crucial for achieving the goals of the ICPD Programme of Action and its linkage with the post-2015 development agenda.

The work of UNFPA is based on the premise that all human beings are entitled to equal rights and protections. We focus on women and young people because these are groups whose ability to exercise  their right to sexual and reproductive health is often compromised.

Our work on their behalf is informed by an understanding of population dynamics, human rights and cultural sensitivities.

UNFPA adopts a human rights-based approach throughout its work. This entails educating individuals and communities about their human rights, so that they can then demand the respect and basic services they are entitled to. This approach also involves empowering governments to fulfil these rights.

UNFPA focuses on women and young people, because these are the groups whose rights often go unfulfilled. Understanding local cultural complexities is crucial to the success of our work because many of the issues UNFPA deals with – including sexual and reproductive health and rights – are sensitive, sometimes taboo, subjects.

UNFPA amplifies its impact by empowering governments to deliver on their promises to women and young people.

It accomplishes this by providing data and analysis to show where countries are falling short, by mobilizing resources and expertise, by advocating directly with government officials or in public forums and through training and monitoring. We participate in regional and international meetings and forums that enhance knowledge about and commitment to our issues.

Since 1978, UNFPA has published an annual flagship report - the State of World Population - to give wider visibility to critical and emerging issues.

UNFPA further expands the scope of its work by partnering with civil society, academic institutions and the private sector.  In 2013, it formed a Civil Society Advisory Panel to encourage dialogue with organizations, networks and partners on programming and policies. UNFPA also works regularly with parliamentarians to review progress in implementing the ICPD Programme of Action.

UNFPA  also participates in and administers a number of pooled funding mechanisms - including Joint Programmes and Multi-Donor Trust Funds - at country, regional and global level. 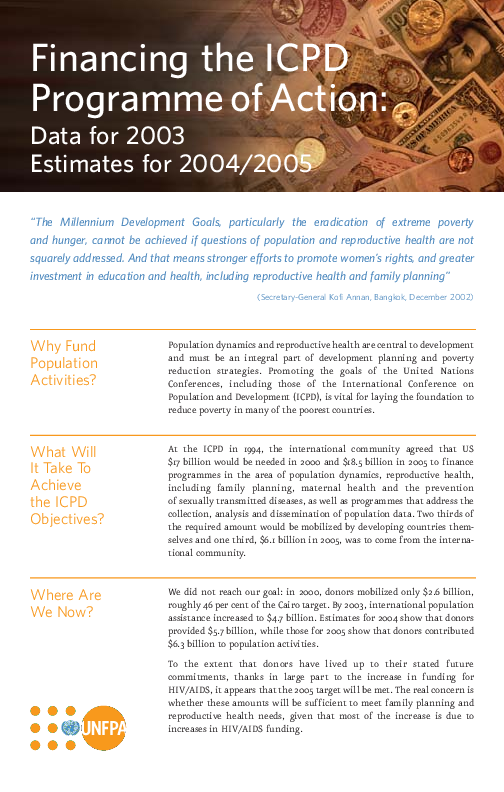 Financing the ICPD Programme of Action 2005

Financing the ICPD Programme of Action 2004 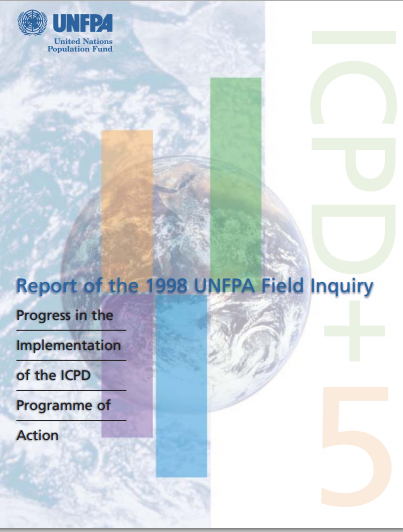 Report of the 1998 UNFPA Field Inquiry