A new partnership with the Republic of Korea and UNDP is giving a boost to UNFPA’s work to support young innovators in Rwanda who are devising and launching ingenious new ways to deliver youth-friendly information on sexual and reproductive health and rights.

With over $600,000 in new funding from the Korea International Cooperation Agency (KOICA), the partnership will expand the YouthConnekt Initiative in Rwanda over the next four years (2019-2022).

The initiative focuses on increasing access to decent jobs for young people as well as promoting their sexual and reproductive health. UNDP and UNFPA will work with the Rwanda Ministry of Youth and the First Lady of Rwanda’s Imbuto Foundation, as well as two private sector institutions – Liquid Telecommunications and National Industrial Research and Development Agency – to scale up the initiative.

“The programme will not only focus on job creation,” said Minister of Youth Rosemary Mbabazi at the May signing of the agreement, “but also on other components like engaging youth in policymaking and civic education – as well as increasing the number of youth accessing health services and adopting healthy practices. This is why the ministry brought on board other partners like UNFPA, the Imbuto Foundation and UNDP.”

The initiative extends financial support to the Innovation Accelerator (iAccelerator) programme, which UNFPA in Rwanda runs together with the Imbuto Foundation. The iAccelerator encourages young people to think critically and creatively about issues related to sexual and reproductive health – and supports young innovators and entrepreneurs in finding youth-led solutions to encourage their peers to use sexual and reproductive health services and adopt healthy lifestyles.

The iAccelerator debuted in Rwanda with a competition launched in December 2016, followed by a series of boot camps and outreach initiatives to equip and encourage young entrepreneurs to take advantage of the opportunity to propose their own projects.

The four winners of the first competition were the mobile phone app Tantine; the comic Girl District; the TV show Tubiganire, which aims to stimulate communication about sexual and reproductive health within families;  and Umbrella, a digital platform offering women information and tools on menstruation and pregnancy. Each received a grant, training and mentorship to bring their ideas to life.

The mobile phone app and website Tantine, which teaches young people about sexual and reproductive health, is the brainchild of Sylvie Uhirwa and her twin brother Sylvain Muzungu Hirwa.

They got the idea for the app when a public health programme at their university brought them to the Mahama refugee camp, home to over 50,000 young people among the Burundian refugees who live there. The siblings noticed the high rate of unintended pregnancies in the camp – where young people have little or no access to information about their sexual and reproductive health and rights.

In addition to developing the app and website, they established a centre equipped with wifi and tablets, so that young people would have a quiet space to use the resources. Today, over 2,000 people use the app, which was recently taken on by Google. Every week, over 10,000 people access sexual and reproductive health information on the mobile-friendly Tantine website. In addition, the co-founders run a mentorship programme for young people.

Another Phase 1 winner, Girl District, is a series of comics that convey information about sexual and reproductive health in a format that engages young people.

According to co-founder Dominique Uwase Alonga, the project was born out of the co-founders’ own experiences: “We grew up believing that the more ignorant you are about SRH the purer you are,” she said. “And I’m now realizing you need to know as much as possible to make the best decisions possible. So we had to first internalize that as a team, before we took it to the girls and boys.”

Girl District also runs a mentorship programme in schools to spread awareness of sexual and reproductive health – and to get young people accustomed to talking about it.

With the new support from KOICA, UNFPA and the Imbuto Foundation are launching the iAccelerator’s second phase in August 2019, inviting young people between the ages of 18 and 30 to submit innovative business ideas in response to the challenge of expanding access to quality sexual and reproductive health information and services for young people. 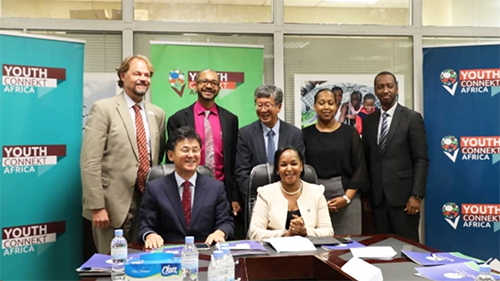 “We are excited about this growing partnership,” said Mark Bryan Schreiner, UNFPA Representative in Rwanda. “We commend KOICA for recognizing and investing in the iAccelerator. With this funding, we will be able to support the Government of Rwanda to reach more youth with innovative solutions together with our partner, the Imbuto Foundation.”

In the spirit of the renewed United Nations Youth Strategy, this One UN Joint Programme supports the delivery of Rwanda’s Vision 2050, putting young people at the centre of the country's development.

She noted that the partnership and the new funding has come at the right moment, as the country strives to reduce unemployment among young people – investing in their livelihoods, education and health, so that Rwanda can reap its demographic dividend.

Announcing the Winners of the Joint Innovation Challenge 2022