UNITED NATIONS, New York – With only six weeks to go until the Nairobi Summit on ICPD25, it's crunch time for all partners to secure firm commitments to realize the promise of the 1994 International Conference on Population and Development (ICPD) — and get the job done by the 2030 deadline for the Sustainable Development Goals (SDGs).

"Please let it happen in my lifetime. I don't want to go to ICPD50," Dr. Lina Abirafeh, Executive Director of the Lebanese American University's Arab Institute for Women, said on 26 September during Join Us on the Road to Nairobi, an event organized by UNFPA, Kenya and Denmark on the sidelines of the 74th UN General Assembly to breathe new life into the ICPD agenda ahead of the Nairobi Summit.

Danish Development Cooperation Minister Rasmus Prehn agreed. "We have talked long enough. Now we need to act," he explained, emphasizing the sense of urgency needed to ensure sexual and reproductive rights and choices for all before the deadline to meet the SDGs.

“We cannot achieve the SDGs without first finishing and completing the Cairo agenda,” added UNFPA Executive Director Dr. Natalia Kanem, who was a delegate at the 1994 conference.

Indeed, moving from words to real action is more critical than ever. The global movement for sexual and reproductive health and rights is under attack.

These are “hard times” for women and girls amid “winds blowing” against the hard-fought gains of ICPD, stressed Women Deliver CEO Katja Iversen, but “we will not go backwards” in the pursuit of rights and choices for all.

Youth are "accelerators" of progress on ICPD

Meanwhile, youth will simply not tolerate any further delay. To ensure progress, young people have made it clear they demand a voice and a seat at the table in Nairobi.

“We want to be part of the discussion as well as the solution,” said Valeria Guerrero, a SheDecides 25x25 youth leader from Ecuador.

Dr. Kanem noted that young people are the true “accelerators” of progress on ICPD; we must recognize them as such by delivering on what we promised them in Cairo. To do so, she has her marching orders from the girls at a school she recently visited in Niger.

“They told me [to tell African leaders that] they want to stay in school. The do not wish to be married off early. They want us to invest in their dreams.”

For the host country, the goal of the Nairobi Summit is to secure the commitments necessary for today’s youth to enjoy the world we imagine, according to Saitoti Torome, Principal Secretary of the State Department of Planning at Kenya's National Treasury. 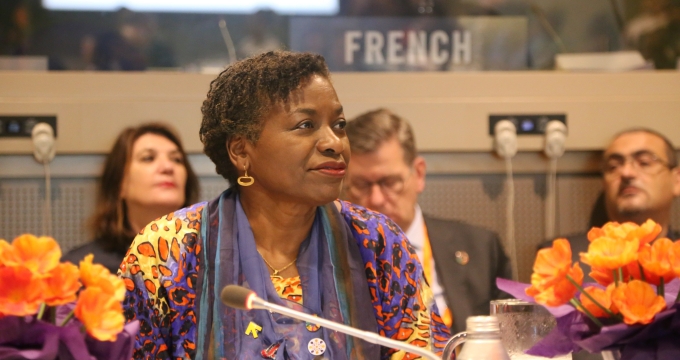 “If you love me, know my status”: Safeguard Young People helps young people…

As Nairobi Summit ends, time to focus on accountability