UNFPA received a significant financial boost with €6,735,000 in additional core and non-core funding from the Government of Luxembourg, a staunch advocate of sexual and reproductive health and rights within the European Union as well as an active member of the She Decides initiative.

The new annual commitment includes €3 million for core UNFPA operations, a 9 per cent increase from last year. Core resources are vital to ensure that UNFPA’s work has global reach, and they increase efficiency by reducing transaction costs. They allow UNFPA to focus on impact and results, even in fragile contexts such as emergencies, and to respond effectively to shifting global development challenges.

With such flexible and predictable funding, UNFPA is well positioned to address countries’ unique needs and achieve its mandate of ending unmet need for family planning, preventable maternal deaths, and gender-based violence and harmful practices. The Grand Duchy is UNFPA's top donor per capita for core contributions, and twenty-first overall.

As part of the recent announcement, Luxembourg also pledged €1.8 million for the Maternal and Newborn Health Thematic Fund (MHTF). Launched in 2008, the MHTF is UNFPA’s flagship programme for improving maternal and newborn health and well-being by boosting global funding for strategic interventions in 39 countries with some of the highest maternal mortality and morbidity rates in the world.

Within the MHTF, the Grand Duchy approved an additional €400,000 to help prevent obstetric fistula, an injury from childbirth complications that causes incontinence and can also lead to infections, chronic pain and other problems, including social stigma. Fistula is treatable and easily prevented through access to emergency obstetric care.

Another €800,000 was directed to the UNFPA Supplies thematic fund, a mechanism that offers contraceptives and other reproductive health commodities in high-need countries.

Luxembourg also committed €735,000 for UNFPA in Iraq. The funding will enable continued support for centres for Yazidi women fleeing abuse and human trafficking by the Islamic State in Iraq and the Levant (ISIL) in northern Iraq. The centres are one-stop shops that offer integrated medical, psychological and legal assistance, as well as referrals for other required services to Yazidi women who survived the ISIL atrocities, classified as genocide by a United Nations human rights panel.

Of the total €10.235 million in co-financing contributions provided to date by Luxembourg, €5 million is allocated to promoting sexual and reproductive health and rights in Senegal by expanding young people’s access to maternal, obstetric and neonatal health, including emergency and referral services. Another €1.5 million is helping conduct Haiti's first ever digital, gender-sensitive population census. 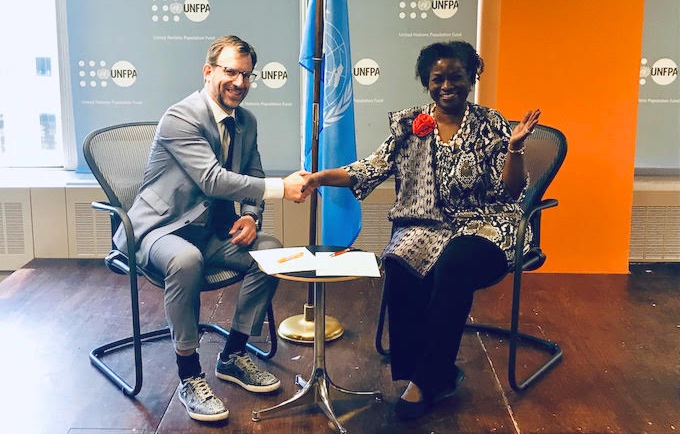