All developing regions experienced a decline in MMR between 1990 and 2010, with the highest reduction in the 20-year period in Eastern Asia (69 per cent) followed by Northern Africa (66 per cent), Southern Asia (64 per cent), Sub-Saharan Africa (41 per cent), Latin America and the Caribbean (41 per cent), Oceania (38 per cent) and finally Caucasus and Central Asia (35 per cent). Although the latter region experienced the lowest decline, its already low MMR of 71 maternal deaths per 100 000 live births in 1990 made it more challenging to achieve the same decline as another region with a higher 1990 MMR value.

Chapter 2 provides an overview of the definitions and approaches for measuring maternal mortality. Chapter 3 is a detailed description of the methodology employed in generating the estimates and a brief comparison with alternative approaches for estimating the global burden of maternal mortality. Chapter 4 presents the estimates and interpretation of the findings. Chapter 5 assesses the progress towards MDG 5 and the importance of improved data quality for estimating maternal mortality. The annexes and appendices present the sources of data for the country estimates, as well as MMR estimates for the different regional groupings used by the contributing agencies. 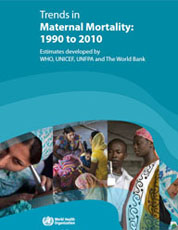