This brochure reflects a consensus of 40 international experts who convened in New York on the occasion of the 15th anniversary of the International Conference on Population and Development. Together they reviewed evidence and developed recommendations on how to reduce inequities in access to family planning and other sexual and reproductive health services, particularly for disadvantaged populations. These actions are urgently needed to accelerate progress towards achieving the Millennium Development Goals by 2015.

Despite increases in contraceptive use since 1994, high unmet need for family planning persists. In the least developed countries, for example, six out of ten women who do not want to get pregnant are not using contraception. This unmet need for family planning is highest among the disadvantaged individuals who are also most likely to suffer adverse consequences from unprotected sex.

A significant, underserved group is a new generation of adolescents -- the largest ever. All too often they enter adulthood with inadequate information on sexuality and reproductive health and few skills to protect their health and rights. Family planning services too often fail to reach the poor, those living in remote areas and urban slums, and people with less education.

Also lacking access are indigenous people, individuals with disabilities, people living with HIV, internally displaced people, and migrant workers, among others. As a result, socio-economic disparities in sexual and reproductive health indicators are among the largest of any health indicators. 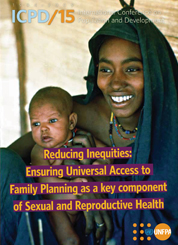