The 2011 report shows that the pace of abandonment of female genital mutilation and cutting (FGM/C), is accelerating in the fourth year of the UNFPA-UNICEF Joint Programme, which has been extended for a fifth year, to the end of 2013.

The year was marked by increased ownership, dynamism and initiative on the part of national governments and implementing partners. Country-level ownership drew particular attention to the interconnectedness of FGM/C and the many other practices which hinder the development of girls and women. The achievements of 2011 illustrate that local level programming can address multiple forms of deprivation and discrimination. Hence, the campaign to end FGM/C also has an influence on maternal and child health, education and child marriage, and the general wellbeing of women and girls.

The report includes highlights from 2011, including 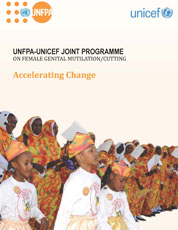