NEW YORK, United States - There are fewer than 500 days left to achieve the Millennium Development Goals (MDGs), and too little progress has been made towards reducing maternal and child deaths. Yet simple, proven interventions can make these goals attainable, said Dr. Babatunde Osotimehin, UNFPA's Executive Director, at the fifth annual Social Good Summit, a conference of world leaders, activists and technology experts, held today in New York.

The Summit, which reaches tens of thousands of people through a livestream and through community meet-ups, seeks to engage leaders, innovators and individuals on the use of technology to improve lives around the world.

But even basic technologies remain elusive for many women during pregnancy and childbirth, noted panellists at the session, which was titled Simple Ways to Change Lives.

“It’s the reality for so many women in Africa to not have access to hospitals and skilled care and lights and water and all kinds of things," said Liya Kebede, a fashion model and World Health Organization Goodwill Ambassador for maternal health. 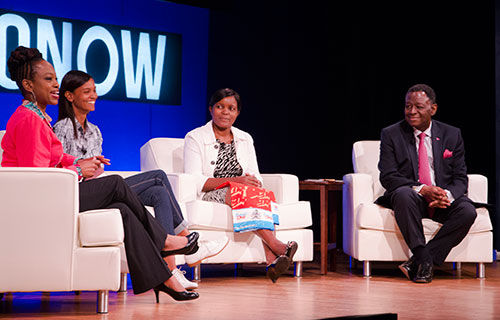 "The challenge is that we thought in 2000, when we constructed the MDGs, there were magic bullets to do these things," Dr. Osotimehin told the audience. "But there's no magic bullet."

There were an estimated 289,000 maternal deaths in 2013, roughly 800 deaths each day, according to the recent joint UN publication Trends in Maternal Mortality. While this was a 45 per cent decline from 1990, it falls far short of the MDG aim to cut maternal deaths by 75 per cent by 2015. Rates of newborn deaths also remain persistently high.

But the solutions are deceptively simple, and well known. "You must have, first, the service of midwives or someone who is trained" to deliver babies, said Dr. Osotimehin. "You must have logistics to deliver all they needâ€¦ simple things, life-saving commodities." Often these commodities are cheap, he noted.

The services must also be affordable, and they must be available to women in remote areas, he added.

Victoria Shaba, a midwife with Save the Children in Malawi, said even basic supplies are unavailable to many health workers in Malawi. "For us to have a delivery package which is complete, with everything, like sterile scissors, even the wrappers to wipe the baby with when the baby is born - it is a challenge," she said.

Having enough trained health personnel is another problem. "There are so few midwives in Malawi, such that we cannot meet demand," Ms. Shaba added, shaking her head.

"It's very difficult to sit back and watch these tragedies happen when you know it's completely preventable and treatable," Ms. Kebede said. "Women are dying from very simple conditions, very simple things, like haemorrhage or the baby will be too big or high blood pressure, things like that. These are all things you can fix in a clinic with the proper training and proper facility."

Dr. Osotimehin, the former Nigerian health minister, pointed to the issue of priorities.

"As Minister of Health in Nigeria, I"d always be worried that governments on the continent and in other parts of the developing world spent 5 per cent or 6 per cent of their budgets on health. Unacceptable," he said.

The problems may seem vast, but they can be overcome, he indicated.

"We have less than 500 days left to achieve the MDGs," said moderator Femi Oke. "What is even possible in that time?"

"Everything," Dr. Osotimehin replied, as the audience erupted in applause. "Everything."

The Social Good Summit brings world leaders together with activists and technology experts to discuss development solutions. Organized by Mashable, 92nd Street Y, the United Nations Foundation, the UN Development Programme, and the Bill & Melinda Gates Foundation, the event coincides with the 69th Session of the UN General Assembly.