SUVA, Fiji—Nervous laughter scatters across a room where representatives from the Pacific Island ministries of health and others have gathered for training on sexual and reproductive health care in emergencies. Their instructor, Dr. Wilma Doedens, a technical advisor for UNFPA, the United Nations Population Fund, has just asked them this question:

“In order to use a male condom a man must have an...?” She pauses here and asks if anyone in the room would like to provide the answer. She is greeted with an uneasy silence. Then, at the mention of the requisite physiological response, the crowd giggles. 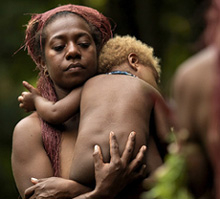 In times of crisis, women and children often suffer most.  Photo: Eric Lafforgue

Though the answer is obvious to these participants, who are all adults, encouraging them to speak openly with one another about sexual matters, generally unthinkable in this part of the world, is an important part of emergency preparedness.

“Condom programming is an essential intervention in emergencies because it stops the spread of the life-threatening HIV virus,” explained Dr. Doedens. “In most societies around the world some people will use condoms in an emergency situation. However, how to go about making them available can largely depend on culture.”

UNFPA's State of World Population 2008 report analyses the cultural dimensions of issues related to reproductive health and rights. It finds that a deep understanding of local mores and attitudes — cultural fluency — is a prerequisite for programme effectiveness.

The Pacific Island countries are extremely vulnerable. Cyclones, earthquakes, tidal waves, volcanoes and ethnic conflicts threaten thousands of small coral and volcanic islands throughout the year. Understanding how to overcome cultural barriers in an emergency situation is essential for both health-care providers and individuals.

“In many of the Pacific Island countries there is a ‘culture of silence’ surrounding sex, HIV, condoms, sexual violence, family planning — basically anything to do with reproductive health, even among husbands and wives,” said Veldah Rosie Ane Hiru of the Solomon Islands Planned Parenthood Association (SIPPA). “During the tsunami crisis in the Solomon Islands, this taboo made it difficult to address related issues when we had to seek shelter as groups.”

In the wake of this crisis, indoor space was limited, which meant that men and women, who normally spend most their daily lives apart, had to deal with these intimate issues in a mixed group, where they were instructed by health-care providers.

According to Veldah, the faces of the participants showed their embarrassment and disapproval. Health-care representatives have had to come up with indirect ways to address these topics, such as role playing and comedy.

The State of World Population report stresses the need to work with community leaders. In the Pacific Islands, where a head chief acting alone makes most of the decisions on behalf of the community, getting emergency sexual and reproductive health services and commodities to people in need can pose a problem. Even if the chief grants permission, it can be limited. For example, distribution of condoms in schools, latrines or clinics may be considered inappropriate. Because communities hold faith-based organizations (FBOs) in high esteem, their consent for emergency response interventions is considered mandatory.

“Religion is a big part of this culture and in order to make decisions regarding reproductive health we need to collaborate with FBOs in everything we do,” Najib Assifi, the UNFPA Director and Representative for the Pacific Sub-Regional Office, explained. “Also, when it comes to dealing with violence resulting from emergencies, the church could be our biggest ally. In crisis situations, since many are in need of shelter and health care, it is easier to work with chiefs and FBOs because they can see the disaster and the need to mobilize. But again, it is extremely important to deliver a programme that is acceptable within the cultural context. Otherwise providing assistance in an emergency will be a challenge for us.”

Access to sexual and reproductive health services can be life-saving, but culture often determines access. In many parts of the world, the hours an emergency health clinic operates may be based on typical schedules for accomplishing chores, and decisions made by men will determine when and where women are allowed to obtain treatment.

“At the onset of an emergency we put a number of things in place which saves lives, such as supplies for hospitals and access to emergency obstetric care,” said Dr. Doedens. “However, in some countries women cannot receive such services without a husband or a male family member present. In an emergency, these women may not be able to access these services even if we make them available. But it is important to consider ways of getting around these obstacles within the cultural context so that they can.”

Apart from offering life-saving sexual and reproductive services in an emergency, UNFPA provides 'dignity kits'. They include a variety of things from soap, toothbrushes, underwear, and supplies for menstruating women. Without such supplies, women may be unable to gather food for their families, or simply participate in everyday activities.

Since the type of protection, among other hygiene essentials, preferred by women varies in different cultural contexts a global dignity kit has never been established for emergency response. Instead, coordinators are instructed to have a brief discussion with women on the ground to identify what type of supplies they need.

“We ask our emergency coordinators not to assume that we know what women need,” said Dr. Doeddens. “We find that some women will be insistent on having a cloth or a headscarf, and this will be included in the dignity kit.” A piece of cloth can patch up or even stand in for damaged clothing.

A headscarf is necessary for women living in Islamic societies and others, where showing one's hair is a cultural taboo. Without something to cover it, women may not feel comfortable or even be permitted to move around their communities, even in an emergency situation.

A natural disaster brings little good, but emergencies can lead to an evolution in cultural traditions -- even 2004 Asian tsunami.

“Prior to the tsunami crisis, emergency contraception was not available in Sri Lanka,” Dr. Doedens said. “At the onset of the emergency, the topic was introduced and discussed with the government and now it is available in family planning clinics and post-rape services. The emergency essentially raised the standard.”

Before the Darfur crisis, she noted, the subject of rape was seldom raised in Sudan. Now, government officials are acknowledging the problem and discussing the clinical management of rape. Some countries, are now using guidelines for emergency post-rape services to develop national protocols for both crisis and non-crisis settings.

“We have seen some rapid changes following an emergency because people became aware of healthier ways to go about addressing their sexual and reproductive health,” Dr. Doedens emphasized. “However, after an emergency if you really want to see an ongoing cultural change you have to influence ideas and attitudes for the long term. For instance, if perpetrators of rape are not seen as criminals and can freely rape young girls, then perceptions must be addressed in order for the culture to be permanently affected.”