Unbalanced consumption harms the environment and environmental destruction has a disproportionate impact on the poor, said Thoraya Obaid, Executive Director of the UNFPA, as she launched The State of World Population 2001 on 7 November. She was speaking at a press briefing at the United Nations Headquarters, New York, organized as one of events held in several cities around the world to launch the report, entitled Footprints and Milestones: Population and Environment Change. It was launched also in Abuja, Kathmandu, Khartoum, London, N’djamena, Paris, Washington and several other cities. 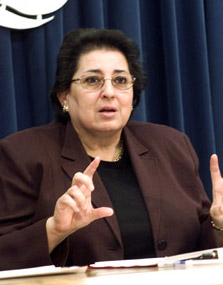 Ms. Obaid told journalists that the report showed how rapid urban growth, new industries and other processes harmed the environment and called for countries to make specific efforts to limit their impact.

The UNFPA, she said, was advocating action to improve clean and efficient technology and make it available to developing countries. It was also calling for balanced and integrated population policies.

In N’djamena, Prime Minister Nagoum Yamassoum of Chad launched the report at a ceremony attended by members of the government, members of the diplomatic corps, representatives of the international organizations and the civil society.

A similar event was held in Khartoum, where the UNFPA’s Representative in Sudan, Zahidul Huque, suggested a multi-sectoral approach to handle environmental degradation. In Kathmandu, Sharat Singh Bhandari, Nepal’s Minister of Health, performed the launch.