For centuries, female genital mutilation or cutting has been practiced throughout much of Africa. But dealing as it does with a very intimate subject, FGM/C was often spoken of, if at all, only in whispers. Today the movement against it is open, public and highly visible. And FGM/C seems to be out in the open and on its way out.

Farmers in remote villages in Mali are listening to radio talk shows debating the issue. Community groups in Senegal talk about it in terms of human rights. Islamic preachers in Somalia appear on television to denounce the practice. Roadside posters in Eritrea boldly condemn it. And policemen in Kenya, trained in human rights, actively enforce the new law that bans it.

A key player in this multi-faceted campaign to encourage abandonment of FGM/C is the UNFPA-UNICEF Joint Programme on Female Genital Mutilation and Cutting. With support from a variety of donors, it has worked against the practice since 2008 and, as an indication of its effectiveness, has just been extended for an additional year, until December 2013.

As its new annual report points out, the Joint Programme works with governments in 15 countries to share knowledge about the dire effects of FGM/C on women’s health, to build capacity among government officials and local organizations to advocate for its abandonment, to convince Islamic clerics to embrace a new role as protectors of women’s health, and to train journalists – 512 in 2011 alone – to report on the issue fairly, accurately and persistently. 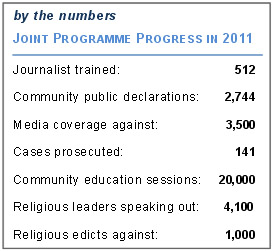 Progress toward ending the practice has been dramatic. In 2011 alone, 2,744 communities publicly declared their abandonment of FGM/C. Across the 15 Joint Programme countries, 141 cases violating national laws against the practice were prosecuted in court. Nearly 20,000 community education sessions took place. Some 3,500 newspaper articles and TV and radio programmes discussed the benefits of ending the practice. Close to 300 health facilities included FGM/C prevention in their antenatal and neonatal care. More than 4,100 religious leaders taught their followers that FGM/C is not sanctioned by Islam. And nearly 1,000 religious edicts were issued in support of abandoning the practice.

Innovative new strategies for ending FGM/C have emerged during the last year. ‘Rescue’ missions in Uganda and Somalia, led by community activists, have prevented girls from being cut. Community groups trained by the Joint Programme systematically convince one family after another to abandon the practice.

In Sudan, a sophisticated multi-media campaign is working to transform the public perception of uncut girls from ‘unclean’ and promiscuous ‘ghalfa’, to whole, intact, perfect and marriageable (Saleema). In Kenya and other countries, young men are joining the debate for the first time, openly declaring their commitment to marry uncut girls. Former circumcisers from the Gambia to Ethiopia are holding public ceremonies renouncing their former profession. In Senegal, a course on FGM/C and its negative health effects has been integrated into the national education curriculum.

Public pressure, which for centuries weighed in favour of FGM/C, is now moving against it. The aim of the Joint Programme is to get this opposition to a ‘tipping point’ where the traditional social norm is reversed. Young girls, women, entire communities and Africa itself will be the beneficiaries of this change.