Tens of thousands of pregnant women affected by Nepal quake

UNITED NATIONS, New York – The toll of deaths and injuries continues to mount days after a devastating 7.8-magnitude earthquake jolted Nepal on 25 April. Millions are thought to be affected across more than 30 of Nepal’s 75 districts, according to reports by UN agencies. UNFPA’s initial estimates indicate some 50,000 pregnant women and girls could be among the survivors.

The Government has reported more than 3,400 deaths so far, according to recent media reports. Thousands more are injured, many seriously, although as more information becomes available from remote, mountainous areas, the final tally could escalate further.

The situation remains precarious, with severe aftershocks continuing to rock the area – including a 6.7-magnitude tremor on 26 April. 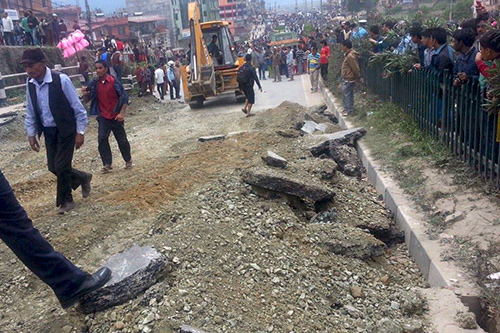 The aftermath of the 7.8-magnitude earthquake in Nepal. © Krish Dulal/Wikimedia Commons/CC BY-SA 4.0

Hospitals in the Kathmandu Valley are reported to be overcrowded, and hospital emergency stocks are being quickly depleted. Injured people are being treated in the streets, and many people are sleeping out in the open, too fearful to return indoors.

Pregnant women affected by the disaster require maternal health services, including antenatal care, safe delivery services, post-partum care, and, for those who experience complications, emergency obstetric services. Protections for women and girls from gender-based violence and other threats will also be critical.

“In times of upheaval or natural disasters, pregnancy-related deaths and gender-based violence soar,” said Priya Marwah, UNFPA’s humanitarian response coordinator in Asia and the Pacific. “Many women lose access to essential reproductive health services and give birth in appalling conditions without access to safe delivery services and lifesaving care.”

UNFPA is coordinating with the Government and humanitarian partners to respond to these needs. Emergency staff members are being deployed, and dignity kits and reproductive health kits are en route to Nepal.

“The Fund is particularly concerned about the fate of pregnant women who have been affected by this tragedy, including those who might face potentially life-threatening complications,” said UNFPA Executive Director Dr. Babatunde Osotimehin, in a statement on the disaster. “All efforts will be exerted to support their safety and the safety of their babies.”

Damage and fatalities stemming from the earthquake have also been recorded in neighboring India, China and Bangladesh.