CYBER CITY, Ramtha, Jordan— Thirty-year-old Khloloud Mohammad was seven months pregnant when she and her husband and seven children walked for four hours, surviving shelling in her hometown of Nasib, to reach the Jordanian border. Every step was a prayer.

“It was not easy to walk this distance, but all I wanted is to have a safe place for my children,” said Kholoud.

When the family arrived at the border they were transferred by bus to Cyber City, an encampment on the edge of the border city of Ramtha, which is now home to almost 500 Syrian refugees, ten of whom have recently given birth.

When Kholoud’s labour started, there was no time to be transferred to a hospital.

“When labour pains started, my husband went to the mobile clinic expecting that they will transfer me to hospital,” Kholoud said, referring to a mobile clinic run by Jordan Health Aid Society and supported by UNFPA.

“When my wife felt that the baby is coming, I ran to the clinic asking for help,” said Mohammad Abu Jwaid, Kholoud’s husband.

“They told me to bring her as soon as possible, and I did,” said the husband.

But, the baby wouldn’t wait for the mother to be transferred into the nearest hospital, according to Fathieh, a midwife working at the clinic.

“I had no other option but to help her give birth at the clinic,” said Fathieh, the 50-year-old midwife working at the clinic. Five minutes after arriving, Kholoud gave birth to a healthy baby girl named Rania, who weighed in at 2.8 kilogrammes (just over 6 pounds).

Both mother and baby were transferred to the King Abdullah University Hospital, a few kilometres away, where they spent two nights.

“While I was running away from the shelling in Syria, I was praying to God I would survive with my children and baby to come,” said Kholoud, when she was back at the clinic, breastfeeding her newborn. “And here I am holding my baby and hope one day we will go back to our country and live in peace”.

Although Fathieh has 27 years of experience as a midwife, her experience with Kholoud was different. “This is the first delivery that takes place in the mobile clinic, and I feel attached to both the mother and the baby,” said Fathieh, who joined the UNFPA-supported clinic in August. 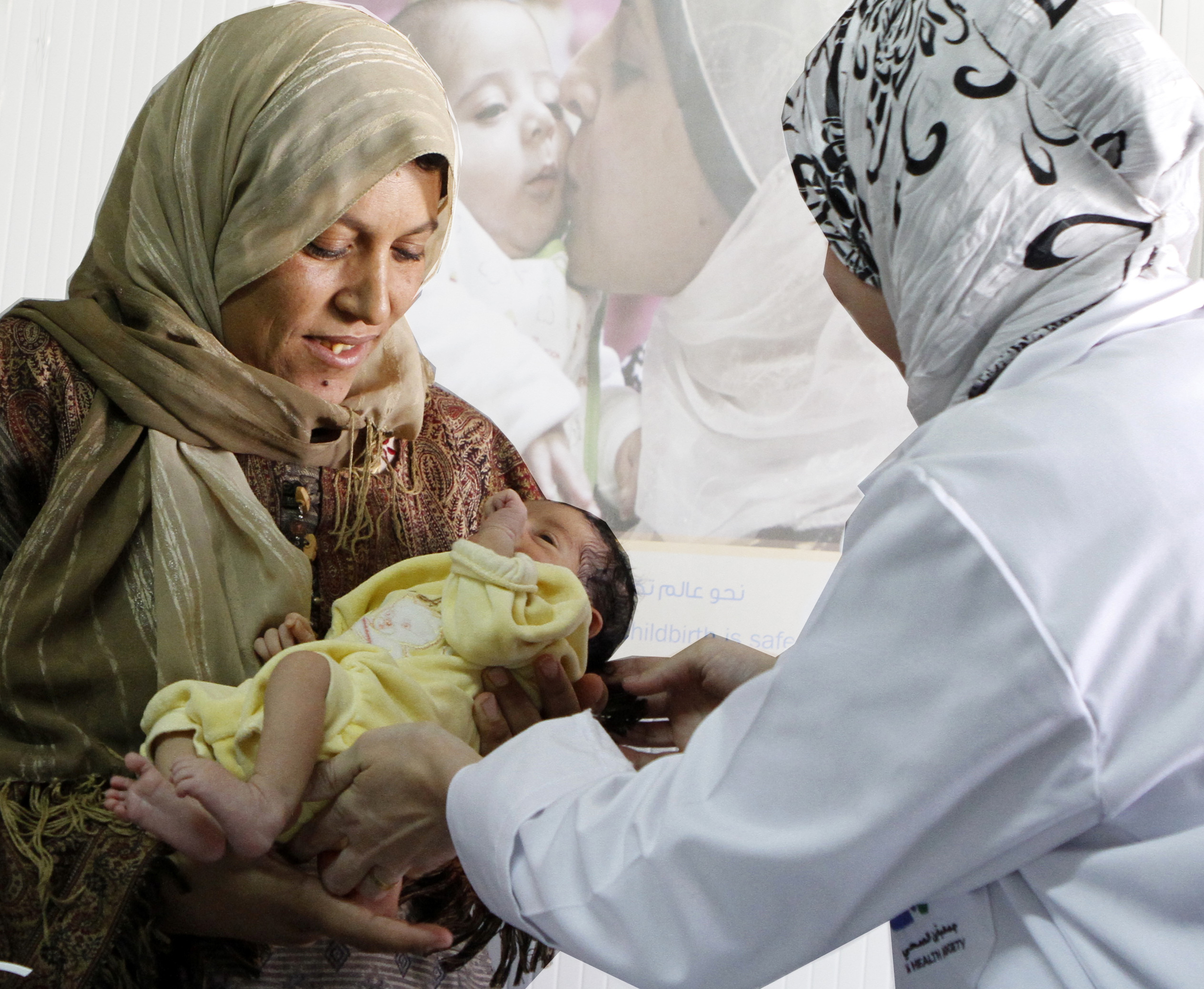 Kholoud Mohammad, baby Rania and Fathia, midwife at the UNFPA-supported clinic near the Syrian border.

In her 27 years working at the Jordanian Ministry of Health Hospitals, Fathieh used to see and deal with 40 to 50 pregnant women on a daily basis. Now there are about 40 pregnant women in the camp, and she remains close to the women she has already helped deliver.

“My relationship with patients at that time would end shortly after they gave birth, as they would leave the hospital. But it’s different here, as I visit them voluntarily to check on their health and see if they need any advice,” explained Fthieh, who graduated from the University of Jordan.

This period offers a good opportunity for Fathieh to talk about other health issues.

“We educate them about breast cancer and all other aspects of reproductive health,” Fathieh noted, adding that some of them find the clinic to be a safe place to discuss any other issue of concern.

Seham Helmi, is one of these ladies who said she comes to the UNFPA clinic regularly.

“It is not necessary to come here only when I need medical checkup,” said the 37-year-old woman, adding, “Here [at the clinic] I feel at home”.

“Whenever I need to talk about my problems, I come here. They listen to me,” said the mother of five who arrived in Jordan two months ago.

For Khouloud, giving birth at the clinic was also a learning experience. “The first time I heard about reproductive health and family planning methods was here at the clinic,” she said.