Suffering in Silence: The Isolated and Forgotten Victims of Obstetric Fistula

Almaz was only 13 when she became pregnant. Married at 12, the Ethiopian girl's tiny and fragile body was not ready for the strain of pregnancy and childbirth. After two days of labour pains, she was told to keep pushing. By the sixth day, her child was finally born, but it was dead. Her gruelling labour ripped her insides, leaving a hole between her bladder and vagina. The damage left her body unable to control its normal excretory functions. 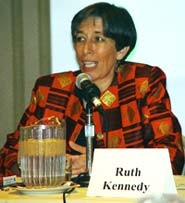 Her husband quickly rejected her. She had given him a dead baby, she was incontinent and she constantly smelled of urine. He sent her home to her family who isolated her because she was thought to be unclean.

Almaz is one of the at least 2 million young women in the developing world who suffer the painful, humiliating and devastating consequences of obstetric fistula. Her story was told at a 10 May briefing organized by the United Nations Population Fund (UNFPA).

Caused by complications during childbirth, usually because the young woman's pelvis is too small or because the baby is too big or badly positioned, obstetric fistula manifests itself as a hole between a woman's vagina and her bladder, rectum, or both, creating a constant leakage of urine or faeces. Girls and young women suffering from fistulas are ostracized by their communities and abandoned by their families, forcing many to become desperate beggars.

Once widespread in Europe and America, fistulas were eradicated by modern medical care early in the 20th century. They are still common in the developing world, where malnutrition and stunted growth make obstructed labour more likely, where cultural practices lead to early marriages and early pregnancies and where health care is largely unavailable or extremely limited.

"Poverty is the fundamental cause of this disease," stated Fama Hane Ba, Director of the UNFPA's Africa Division, speaking at an expert panel on the prevention and treatment of fistulas convened by the agency for the occasion of the United Nations Special Session on Children. "The early age of marriage also has a lot to do with setting the ground for it," she continued.

In many cultures, girls are married off before of just after they have experienced their first menstrual flow. Although the legal age for marriage can often be 18, the average age at first childbirth in many developing countries is still 16, as laws are not followed and not enforced. According to the expert panel, meaningful social and legal change is needed to prevent the horrific condition, by improving the status of girls and women, increasing their access to health care and nutrition and giving them the choice to postpone marriage and childbirth.

"Young girls should not be married until they are physically ready for it," declared Thoraya Ahmed Obaid, Executive Director of UNFPA.

While fistula is devastating, it can be repaired. "Repair is possible, it requires a trained doctor and nurses and the cost is $350," explained Dr. France Donnay of UNFPA's Technical Support Division. But this is an exorbitant amount of money for most of the young women, so services at few existing fistula hospitals have to be offered at no cost.

Ruth Kennedy, the liaison coordinator of the Hamlin Fistula Hospital in Addis Ababa, remembers when Almaz's father brought her to the clinic for treatment: "She came in her hand woven dress with her head down. Their journey was humiliating. [Fistula victims] sit in their little puddle, and no one wants to sit next to them."

At the clinic, Almaz met other girls and young women who understood her suffering. "Knowing that they are not alone starts the healing process," stated Kennedy. Almaz's operation was successful on the first try, as it is in more than 90 per cent of the cases. Almaz was overjoyed. "It's coming out from the right hole, at the right time!" she exclaimed according to Kennedy.

However successful, only about 500 operations are performed every year. This figure is arresting when we consider that there are more than 100 new fistula cases every day. "At the rate we are going and if we have no more fistulas from today on, it would take 400 years to repair the ones that exist today," warned Kennedy.

If not operated, fistulas bring on urinary tract infections, which can lead to bladder infections. If left untreated, the infection can be deadly to the young woman. "Even if the young woman is a survivor of maternal mortality" stated Kennedy, "she will die later, alone, in a hut."