The Sky's the Limit for Aasmani Chaudhary, a Local Hero to Indigenous Women in Nepal

UNITED NATIONS, New York — Until 2000, the Tharu people of western Nepal were legally bonded as servants to upper caste landowners, who forced them to farm land stolen from their Tharu ancestors. For many generations they worked in virtual slavery -- without pay and with few opportunities for health care or education. Among an already oppressed group, women were seen as having the least value. Many women were forced into marriage and total financial dependence. andmany others suffered sexual abuse as well.

“When I was growing up, I watched as the women cared for the animals year round,” said Aasmani Chaudhary. “They worked in the worst weather, day and night. When the time came to sell the animals, men profited. Women had no control over the number of children they had and returned to work in the fields three days after giving birth.” Her name means ‘sky’, and Aasmani has consistently reached for it -- despite the odds against her, both as a member of a marginalized group and as a woman.

Last year, Ms. Chaudhary, now 34, travelled to New York to receive the International Award for the Health and Dignity of Women, which recognized her efforts to use microfinance to improve the quality of life for Tharu women and girls. Since 2006, Americans for UNFPA, the United Nations Population Fund, has honoured individuals who have made exemplary contributions to women’s health and rights.

From school to a strategy to help others 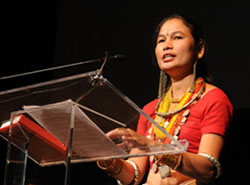 In Chaudhary’s family, it was typical for only boys to be educated. But one day her cousin registered for school, and included Aasmani’s name along with his own simply by paying an additional 25 cents. The unexpected privilege of getting an education left Ms. Chaudhary determined to help other women who were not so fortunate. By the age of 18, she’d devised a microfinance strategy that would allow her to keep this promise. She began by working with an agricultural programme funded by USAID. Then she used her own income to establish the Rural Women Development Centre, a microfinance institution that helps Tharu women, who had been limited to household work, scrape together the capital needed for small investments, like sewing machines or goats.

“Before I could improve the economic status of the women in my community, I faced two challenges. First, I had to convince them I was trustworthy. Second, I had to convince them that a life of dignity and prosperity was possible for all of us. They asked me, “How can we save our money when we have none?" I told them to gather wood from the forest and materials for cooking, and then sell them in the market. That is how we began,” said Ms. Chaudhary.

In most microfinance institutions borrowers form groups to mutually guarantee each other’s loans, and the groups meet weekly or biweekly to make loan repayments and deposit savings. The loan cycles and repayment schedules on microcredit loans are often short, the cash turnover occurs on a daily or weekly basis, and the interest charged is significantly lower than the rate charged by other credit sources for impoverished women. For most women who join such programs, their savings represent the first-ever opportunity to accrue money for purchasing assets or for emergency use.

"What we’ve gained is self-respect and the means to insist that we are worthy of more."
-Aasmani Chaudhary

At first, Ms. Chaudhary’s operation was small, community-based and slow growing. But, with support from UNFPA, it has been implemented across the Dang Valley. Today the Rural Women Development Centre includes a health component, funded by UNFPA, to build demand for quality health services in remote areas, share information about HIV and AIDS, and bring primary health care, including family planning, to rural women. Her programme has benefited more than 24,000 families. Participating women take an oath to spend money wisely.

Integrating microfinance with other social services

Across the world there are more than 3,300 institutions offering microfinance services to more than 133 million clients, some 70 per cent of whom were living in poverty when they received their first loan, according to the Microcredit Summit Campaign, the world’s largest global network of microcredit stakeholders, which UNFPA helps support. Many projects take advantage of the networks to promote literacy, health services and to build income-generating skills. About 85 per cent of participants are women.

“We still need more support from our government, and we need access to education and health care,” said Ms. Chaudhary at the Health and Dignity of Women awards ceremony. “But many Tharu women have come to believe that it is not their destiny to live in despair, and what we’ve gained is self-respect and the means to insist that we are worthy of more. Education and health care are key. A society will not progress as long as women remain financially dependent, weak or broken in spirit. And I will feel my mission is complete only when all the women of Nepal have access to their basic rights to reproductive health, education and income generation.”

— reportage by Shannon Egan and Americans for UNFPA