KIBERA, Kenya — In early January, armed men tore into the house of a 32-year-old mother of three in Kibera. They undressed and then took turns sexually assaulting her. A few days later, the woman came to the Gender Violence Recovery Centre in Nairobi Women’s Hospital for help. Her upper arm was swollen, her fingers bruised and her chest was tender. 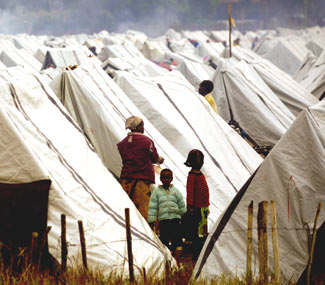 More than 15,000 people have sought refuge at the UNHCR internally displaced people’s camp in the western Kenyan town of Eldoret. Photo: Micah Albert/Redux

Another woman, just 23 years old, was treated at the centre a day later. She stated that three men accosted her on her way home. They threatened her with weapons, dragged her into an isolated area of Kawangware and raped her. The medical report indicated she had minor abrasions on her body and lacerations around her genital area.

These are two of many women and girls throughout Kenya who have suffered sexual violence since the disputed presidential elections took place in late December.

“Women fear violence any moment,” explained a 42-year-old Kenyan woman seeking shelter in one of the many camps that have been set up to provide support for the displaced.

"Sexual violence … is being used as a tool to terrorize families and individuals and precipitate their expulsion from the communities in which they live. "
--Jeanne Ward

Data emerging from specialized health centres serving survivors suggest that sexual violence is widespread in communities affected by post-election violence and in some settings is committed by gangs of roving men targeting women and children of particular ethnic groups. “Several reports suggest that sexual violence may be accompanied by further brutality such as inserting objects into genitalia,” explained Jeanne Ward, a technical consultant on gender-based violence for UNFPA, the United Nations Population Fund.

Sexual violence used as a weapon of terror

Since the violence began on 27 December, the Nairobi Women’s Hospital and the Coast General Hospital in Mombasa have reported a two- to three-fold increase in the number of women and children seeking treatment for sexual assault. At Nairobi Women’s Hospital alone, more than 300 women and children have sought treatment for sexual assault in a matter of six weeks. One patient was just one year old.

“Sexual violence is not only occurring as a by-product of the collapse of moral and social order in Kenya brought on by the post-election conflicts,” Ward said. “It is also being used as a tool to terrorize families and individuals and precipitate their expulsion from the communities in which they live. Whatever the motivation, perpetrators are exploiting the conflict in order to commit sexual violence with impunity.”

Officials believe that most survivors are not getting the care they need following exposure to rape and other forms of sexual violence. Even in peaceful times, Kenyan women -- like most women around the world -- may not report sexual violence out of fear, stigma, and shame. Some may even risk being disowned by their families or communities if they speak out. During a crisis, even fewer incidents may be reported because of difficulty accessing service: In many rural areas where women are encamped there are simply no services available. 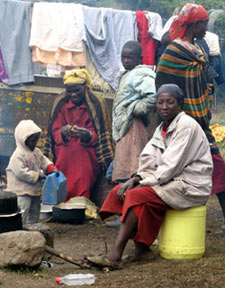 The days are long for displaced women and children in the encampments. Photo: Jeanne Ward

Even where services are available, the need to address more immediate concerns may take precedence over receiving care. As one woman from Burnt Forest explained, “In a crisis like this, your first thought is to care for your children, get settled down. You don’t even think to report…you are trying to figure out how to live.”

It is estimated that over 1,000 people have died and over 200,000 people have been displaced during Kenya’s crisis. While the violence has waned somewhat, many of the displaced are still unable to return to their homes because of ongoing political tension, and future security remains uncertain.

Women at risk – even within camps

As many as 300 camps have emerged during this crisis – many of them informal and therefore underserved by the humanitarian community. Even in the larger camps where services have been instituted, protective mechanisms for women and girls are weak.

“In many camps, men and women (who are not family) are sleeping under shared tarpaulins or out in the open, making women feel afraid of the potential for sexual assault,” Ward said, adding that many girls and women have repeatedly expressed concern over the threat of sexual violence.

“I think they [women and girls] are generally scared and angry,” she explained. “In terms of addressing the threat of sexual violence and sexual exploitation, they haven't had much opportunity to speak out about it. But when given the chance, they are vocal about the need to improve protection in the camps.”

Women and girls left to fend for themselves 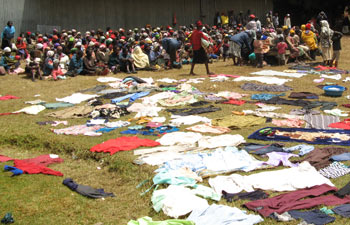 “There is little evidence that issues of gender and gender-based violence have been taken into account in camp design and delivery of services in those places where services have been established,” said Ward. “Displaced women and girls living outside of encampments also face risks of sexual exploitation linked to lack of adequate survival resources,” she added.

In the absence of adequate services, women may feel compelled to engage in sex in exchange for the essential resources. “We have to feed our children; if we don’t do it, our kids don’t eat,” explained a displaced woman dwelling in the Eldoret encampment.

UNFPA, along with the Kenyan Ministry of Health and others, have made an effort to provide free condoms to many of those who have been displaced, but to what effect is uncertain. Although there is a high prevalence of HIV and sexually transmitted infections in the country, numerous condoms have been found tossed on the camp grounds unopened. Many survivors, including the two women mentioned in this article, reported that their assailants did not use condoms. Both of these women have tested positive for HIV and Hepatitis B.

UNFPA has provided victims of sexual violence with medicines to treat sexually transmitted infections such as gonorrhoea, syphilis and chlamydia. The Fund has also provided post-exposure prophylactics to prevent the transmission of HIV. However, unless women and girls can get care right away, this potentially life-saving treatment is worthless. In order to provide protection, the prophylaxis must be administered within 72 hours after sexual intercourse.

“Violence against women and girls makes its hideous imprint on every continent, country and culture,” said the Secretary-General. “It is time to focus on the concrete actions that all of us can and must take to prevent and eliminate this scourge – Member States, the United Nations family, civil society and individuals – women and men. It is time to break through the walls of silence, and make legal norms a reality in women’s lives.”

The campaign aims to mobilize public opinion to ensure that policy makers at the highest level work to prevent and eradicate violence against women. A key target will be to secure political will and increased resources from governments, international institutions, United Nations entities, the private sector and other donors for policies and programmes to tackle the problem.

In response to Kenya’s crisis, UNFPA initiated a rapid interagency assessment on gender-based violence issues in the affected areas and is currently compiling the results from the areas visited, including Nakuru, Eldoret, Mombasa and Nairobi. UNFPA has also developed a matrix for tracking and helping to coordinate prevention and responses to sexual violence.

In collaboration with UNIFEM, government and local NGO partners, UNFPA has also organized inter-ministerial trainings at the provincial/district levels based on interagency guidelines for promoting integration of gender issues into emergency response and ensuring integration of gender-based violence prevention and response strategies into all aspects of humanitarian aid.

“These initial efforts at coordination, training and programming represent a positive first step,” Ward said, adding that the fluidity of the situation presents significant challenges to reaching the affected population.