MACCHA, Lebanon— Since the beginning of the crisis in Syria last year, nearly 80,000 people have sought refuge in neighbouring countries. Over 26,000 Syrian refugees have fled to Lebanon alone. Given that the vast majority of refugees are women and children, providing reproductive health care for people affected by the crisis in Syria has been UNFPA’s priority.

Indeed, women fleeing war may have to give birth on the run or in unsanitary settings, without even the most basic items for clean delivery.

“A 20-year-old gave birth alone in a kitchen and cut the newborn’s umbilical cord with a string used for sewing chicken,” recalls Zeina, one of two nurses running the only medical centre for Syrian refugees in the village of Maccha in northern Lebanon. “When she came to us, the baby was crying and had a severe infection. The odour was unbearable.” 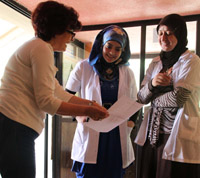 Unattended deliveries were already common in many parts of Syria before the conflict. “I gave birth to my third daughter in a car. She came out and I was alone,” recalls Sourraya, a 22-year-old refugee and mother of five children. “My first boy is the only one born in a hospital. All others were born in hectic conditions: at home or in the car on the long way to the clinic.”

Sourraya is from Hosn, a small town near the city of Homs in Syria. She had to flee the country with her five children and her sister-in-law. Their husbands were left behind. She now lives in an apartment with five other families in Maccha. Her youngest child is only one month old.

Health care is affected by the conflict

“I have easy pregnancies, I don’t need medical assistance,” claims Sourraya with a smile. But obstetricians and midwives know that childbirth is the most vulnerable time of a woman’s life, and it is impossible to predict for certain when life-threatening complications will arise. In 2010, the maternal mortality rate for Syria was estimated at 70 for 100,000 live births. But the rate is usually higher in rural areas, and especially in times of conflict. Sourraya admits that even though she would have liked to seek medical care during her pregnancies, “there is a shortage of medical services available in Syria.”

With the protracted conflict, medical services in Hosn and other remote towns of Syria are more limited than ever. “With the war, the only gynaecologist in Hosn packed her things and fled,” says Sourraya. “Her husband is the village pharmacist. He also closed down.”

To ensure that women are provided with the antenatal and post-natal care they need, UNFPA and its partners train and deploy midwives to affected areas (see below).

In her many years working with Syrian refugees in Lebanon, Zeina said the discussion of sexual and reproductive health is often taboo. Unmarried young people do not seek advice or reproductive health services. “A 17-year-old girl who was engaged to her cousin came to us, she had not had her period in the last year, “mentioned Zeina. “ She did not think of seeking medical attention. It is only when she consulted a generalist for a pain in her ear that she made allusion to it. It turned out she had an ovarian cyst.”

Early marriage is also common in Syria, which hinders women’s autonomy in sexual and reproductive matters. Sourraya was married at age 15. When asked if that was too early she says, “It is early. I still feel like a little girl myself. I wouldn’t marry my daughter at that age. Not before she is 20 years old and ready.”

Misconceptions about family planning options are also widespread. Many women refuse contraceptive injections because they believe it causes sterility. Sourraya says she uses an IUD, but that men often refuse to take responsibility for contraception. “It doesn’t work that way.”

UNFPA Lebanon is distributing reproductive health kits and supplies to health centres in North Lebanon. UNFPA is also organizing trainings to ensure that health workers can help prevent and manage the consequences of sexual violence, HIV transmission, and prevent neonatal and maternal morbidity. Women and girls have also been given ‘dignity kits’ with personal items including sanitary supplies. With the number of Syrian refugees increasing in the region, UNFPA is also scaling up its humanitarian response in Jordan, Turkey, Iraq and within Syria.

Midwives to the Rescue

As the number of people fleeing the crisis in Syria increased, so has the need for women’s health services.

So when the Norwegian Refugee Council invited her to provide extra capacity to UNFPA’s office in Jordan, Kristen Naess-Andresen a senior Midwife at Oslo University Hospital with 17 years’ experience, did not hesitate. 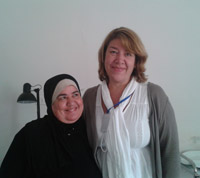 She stepped in to provide technical assistance in the transit site of Al Bashabshe, where Jordan’s Ministry of Health runs a clinic to provide primary health care to over 1,200 Syrian refugees. Kristin worked closely with Fathie Falah Ayyad, a Jordanian midwife, to ensure that women were provided with the space and care they needed within the clinic.

As Fathie had quickly noticed, many Syrian women were reluctant to be examined by male doctors and were not comfortable talking about their health concerns in the clinic’s open space. Kristin and Fathie were able to secure a space in the health clinic for a ‘women-only’ room. UNFPA equipped and supplied the room with a gynaecological bed, a clean delivery kit for emergency deliveries, contraceptives, and basic furniture.

Over the course of her time in Jordan, Kristin assisted Fathie on how to maintain a stock of family planning methods and provided advice on the benefits of promoting breast feeding during an emergency in order to prevent malnutrition and illnesses among infants. Thanks to the new women-only space, Fathie is also now able to provide Syrian women with family planning information and carry out antenatal care.