UNITED NATIONS, New York – Around the world, Valentine’s Day is celebrated as a time of joy and romance. Yet for millions, fairy tales of love and marriage are just that – fiction. Hundreds of millions of women and girls alive today were married off while still children. Many were exposed to violence, forced from school and pushed into premature parenthood.

Child marriage is a tragedy for the individuals it ensnares – often the most vulnerable, impoverished and marginalized girls. But it is also bad for communities and societies as a whole, locking child brides and their families in a cycle of poverty that can persist across generations. Ending child marriage – enabling girls to finish school, delay motherhood, find decent work and fulfil their potential – could generate billions of dollars  in earnings and productivity, studies find.

This year, for Valentine’s Day, UNFPA is calling on the world to prioritize ending child marriage.

Below are seven little-known facts about child marriage. Better awareness of the problem, its pervasiveness across the world, and its consequences, may help leaders – as well as young people themselves – end the practice once and for all.

1. Child marriage is common. It takes place in every corner of the world.

More than 650 million women and girls alive today were married before their 18th birthday. Globally, 21 per cent of young women, 20-24 years old, were child brides. And while child marriage is most prevalent in low- and middle-income countries, it also takes place in high-income countries.

Examples of this harmful practice can be found everywhere.

In Nicaragua, for instance, Irayda ran away from an abusive home to get married at age 14. “Before I was 15, I was already pregnant,” she told UNFPA.

As is often the case, the responsibilities of married life and parenthood pushed her out of school, limiting future options for herself and her daughter. “I would have liked to stay in school instead of dropping out,” she said.

Advocates are tackling this practice everywhere, too – despite resistance. In North Macedonia, Nesime Salioska’s organization stopped a wedding between a 16-year-old girl and the adult man who had fathered her baby. It was an uphill battle, with many officials refusing to take action. “The notion is that this issue is part of the tradition and they should not interfere,” she said. In the end, she said, “we stopped a life being stolen.”

2. Progress is being made – but not enough

First, the good news: Global child marriage rates are slowly falling. Around 2000, one in three women between the ages of 20 and 24 reported they had been married as children. In 2017, this number was just over one in five. South Asia, home to the largest number of child brides, has seen some of the most dramatic progress. In that region, a girl’s risk of marrying before age 18 fell by more than a third in just a decade, thanks to investments made in girls’ education and welfare.

But there is also bad news: Unless such efforts are accelerated, reductions in the number of girls being married off will not keep pace with population growth. Today, some of the fastest population growth is seen in places where child marriage remains widespread, such as West and Central Africa. And in other places, such as Latin America and the Caribbean, child marriage rates have remained stagnant for decades. Without urgent efforts, the total number of child marriages will likely increase by 2030.

3. The cost of ending child marriage is surprisingly affordable

The solutions are straightforward, and affordable. In November 2019, UNFPA released a joint study with the Johns Hopkins University, in collaboration with Victoria University, the University of Washington and Avenir Health, assessing the price tag to end child marriage in 68 countries that account for about 90 per cent of the phenomenon. Ending child marriage in these countries by 2030, researchers concluded, would cost just $35 billion.

In other words, it costs roughly $600 to spare each child bride — equivalent to the bill for a single night in a luxury hotel.

The $35 billion investment — in educational interventions, empowerment initiatives, and programmes that change social norms around child marriage — would avert approximately 58 million child marriages. On top of that, girls who escape early marriage will be able to “make a more productive contribution to the household enterprise,” yielding significant benefits to their communities over time.

4. Both boys and girls may be married off as children – but girls are much more vulnerable to the practice.

Boys can be – and are – married off as children. UNFPA figures evaluating data from 82 low- and middle-income countries show that 1 in 25 boys, or 3.8 per cent, marry before age 18.

“I was a child,” a young man in Yemen told UNFPA about getting married at age 16. His wife was 13. “I could not make my own decisions,” he explained. “My father ordered me to marry, so I got married.”

Marriage at such an early age foists both boys and girls into adult responsibilities before they are ready. All children in these precarious circumstances are less able to advocate for themselves, and are vulnerable to abuse and exploitation.

Yet there are harms that accrue to girls much more frequently than to boys. Studies show child brides are especially at risk of violence – from their spouses, in-laws, or even from their own families.

In Uganda, 15-year-old Abura* refused to marry the man her father selected for her. Her father and brother beat her and then locked her in with her husband, who raped her. She ran away, surviving in the bush for three weeks before she returned home, where her brother beat her again. Eventually, she escaped to a shelter for survivors of violence.

Child brides are also more likely to become pregnant before their bodies are mature, increasing the risk of serious complications.

And girls are much more likely to be married off when they are very young. While the majority of child marriages take place among 16- and 17-year-olds, there are many countries where girls are commonly married at or before age 15. Among boys, these very early marriages are virtually non-existent (0.3 per cent).

Yet around the world, there are national or local laws that enable different interpretations of this agreed principle. Many countries permit child marriage to take place with parental consent or under religious or customary law, for example.

Bertha was a child bride in Malawi. Malawi has laws prohibiting marriage before age 18, but for a time these laws conflicted with language in the Constitution permitting marriage to take place earlier with parental consent. The Constitution was amended last year to eliminate this contradiction.

“I experienced serious complications while giving birth to my daughter because my body was not mature enough for childbirth,” Bertha told UNFPA, then 17 years old and divorced. “Many girls like me want to be in school and not married,” she said.

Even in places where child marriage is clearly illegal, enforcement can be a problem. Around the world, many marriages are not legally registered, for example.

6. Child marriage and teen pregnancy are closely – and dangerously – linked

Child marriage is often a precursor to early pregnancy. In developing countries, 9 out of 10 adolescent births take place among girls who are already married. These early pregnancies pose serious health risks to girls whose bodies may not be developed enough for motherhood. Globally, complications from pregnancy and childbirth are the leading cause of death among adolescent girls.

Ameena, in Yemen, became pregnant soon after she was married at age 15. “I did not know what was happening to me during my first pregnancy. It felt that something scary was happening inside my stomach. I damaged my spine because of this early pregnancy. I was not ready to give birth. I was not ready to have a husband. I did not know what marriage was.”

Sometimes, these injuries can be emotional, exacerbated by girls’ exposure to violence. Freshta*, in Afghanistan, experienced a serious post-partum mental illness after she was married off at 12 to a man in his 60s. “I got pregnant and gave birth. He didn’t allow me to see my baby, hug him, kiss him and feed him,” she told UNFPA. “I wanted to finish my life because of all the torture.”

Early pregnancy also puts girls at risk of being married off. Girls may be forced to marry the father of their baby – even a rapist – to spare their families the stigma associated with unmarried pregnancy.

In Kenya, Eunice became pregnant in 2013, and her father tried to marry her off to the baby’s father. When the man refused, his own elderly father decided to marry her instead. Eunice tried to run away, but she was caught. “They really beat me up, a beating like I had never experienced in my entire life. I really suffered and cried a lot,” she told UNFPA. Eventually, her mother found her and reported the abuse to police.

Many changes are required to end child marriage, including strengthening and enforcing laws against the practice, advancing gender equality and ensuring community commitment to girls' rights.

But young people must also be empowered to know and claim their rights. This means they must be given accurate information about their sexual and reproductive health, opportunities for education and skills development, and platforms for participation and engagement in community and civic life.

It may seem simple, but such information and opportunities can be life-changing. When vulnerable young people are empowered with knowledge, they can advocate for themselves, and even persuade their families to cancel or delay engagements.

UNFPA works with partners and communities around the world to educate and empower girls, and to raise awareness in communities about the dangers of child marriage.

Many of these girls have become advocates in their own right.

In Nepal, 16-year-old Kabita belongs to an adolescent girls’ group supported by the UNFPA-UNICEF Global Programme to Accelerate Action to End Child Marriage. “If I quit my studies, I will be married off immediately,” she said. As a result, she is determined to stay in school. “A brighter future starts with an education,” she said.

The Global Programme works in 12 countries with high prevalence of child marriage. Between 2016 and 2019, some 7.2 million girls were empowered through the Global Programme, and more than 30 million people were reached through media messages, community dialogues and other advocacy.

In Zambia, Linda learned about her rights at a UNFPA-supported safe space for girls. “I now know that child marriage is wrong," she said in an interview when she was 12.

She added, “I see a lot of girls get married early, and soon afterwards become pregnant or become infected with HIV. This should not be happening in our communities because girls should be in school and working hard to become teachers, doctors and lawyers and any other career goals they want to achieve.”

A version of this article was published on 1 February 2018. It is being re-released with updates and new data. 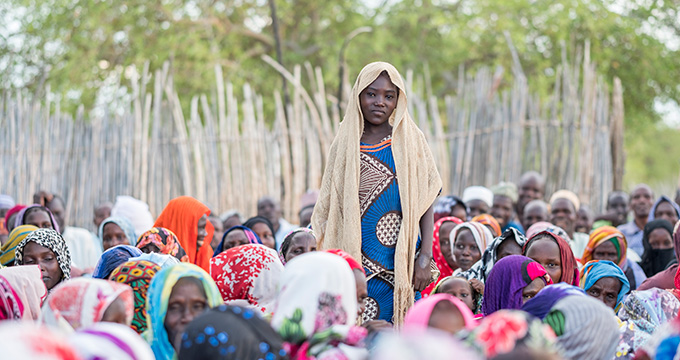