DAMASCUS, Syria – “It was the worst experience of our lives, especially after ten years of crisis in Syria,” said Najwa* about her recent life-threatening ordeal, which exemplified how maternal and child health can suffer catastrophically during conflicts.

Najwa’s story started in early August when she was forced to flee her home with her husband and five children following the outbreak of hostilities in Daraa Al-Balad in southern Syria. Compounding her misfortune was the fact that she was nine months pregnant.

Most people displaced by the recent fighting in Daraa Al-Balad found refuge with relatives and friends in Daraa city. However, around 1,500 people, including Najwa and her family, were placed in six collective shelters in the city.

“I did not realize what was happening to me,” said Najwa, 28, recounting her story on a recent day. “I was just focusing on getting to a safer place.”

A UNFPA-supported mobile team, run by the Syrian Family Planning Association (SFPA), met Najwa during a regular visit to the shelter where she was staying. By coincidence, the day of the visit, 13 August, was when Najwa’s labour pains started.

Members of the team examined her and found that she was facing serious childbirth complications. They rushed her to the Daraa National Hospital. There, a gynecologist determined that Najwa needed an immediate Caesarean section.

With emergency surgery, she gave birth to a healthy boy. She named him Mohamed.

Access to life-saving sexual and reproductive health services in Daraa, and the ability to respond to gender-based violence, continue to be severely disrupted due to the ongoing fighting. Pregnant women there continue to risk life-threatening complications because they cannot easily receive safe delivery and emergency obstetric services.

To address these challenges, UNFPA is working with the SFPA mobile team to provide shelter residents with a variety of primary health care services, as well as maternal and newborn care. Complicated cases are referred to SFPA clinics in Daraa City.

UNFPA and its partners are also providing services to prevent and respond to gender-based violence among the affected population, as risk of violence is known to increase in humanitarian crises.

A “fresh life” after “the worst time”

Once Najwa received all the medical care she needed at the hospital, the mobile team took her and Mohamed back to the shelter. The team has since been following up on their condition, providing Najwa and her baby with all the required medical support, including postnatal and neonatal care.

“We went through the worst time in our life, but we have a fresh life now,” said Najwa. “I am so happy for the arrival of my new baby.” 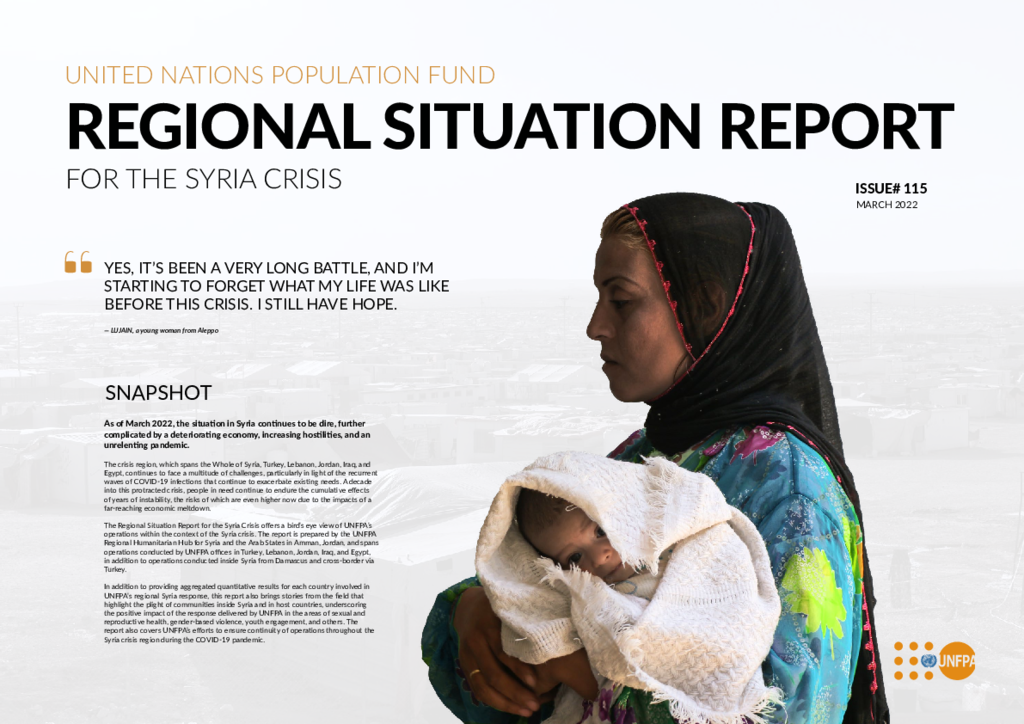