GAROUA, Cameroon – The first few times she gave birth, Hadja Aminatou, of the northern Cameroonian town of Garoua, could not afford to seek care at the local hospital. Instead, she gave birth at home with the aid of a traditional birth attendant.

But during her last delivery, Ms. Aminatou was finally able to receive skilled care from the staff at a local health centre, largely due to a government programme supported by UNFPA – the UN Population Fund – and by the French Development Agency. The programme subsidizes and pre-positions delivery and Caesarean ‘kits’ in health facilities across the country.

“When we were told that with 6,000 CFA [US$12], we can deliver our babies in good condition at the hospital, we came here,” said Ms. Aminatou, a mother of five. “This is a very good thing for poor people like us.”

Prior to the programme, women in labour, even those in need of Caesarean sections, were expected to purchase all necessary medical supplies from local pharmacies, which were often out of essential items. As a result, women often faced delays in accessing medical care. In public health circles, these ‘stock-outs’ are considered a major and preventable cause of maternal death. 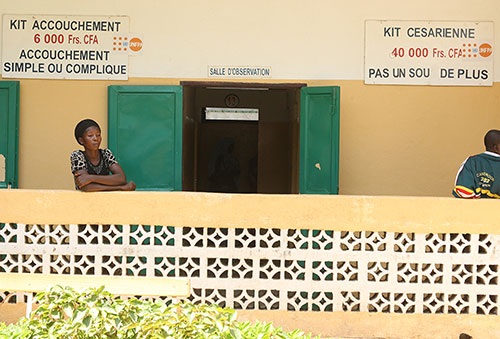 Moreover, an average family would have to spend about $40 on medical care and supplies for a delivery and $240 for a Caesarean procedure – costs too high for many women.

Bapetel Ali, a resident of Garoua, said his wife used a kit for her first delivery. “With an advance of 1,000 CFA [$2], or even with no advance at all, you can be assured that your wife will be taken care of while you are given some time to pay the remainder afterward,” Mr. Ali said.

The fixed rates enable health facilities to replace the kits, which are produced by a regional pharmaceutical supply centre. The rates also cover provider fees for skilled birth attendants, with a modest margin that allows health facilities to offer kits to poor women free of charge.

Toumara Biena, a father of six, spoke of his wife’s experience: “We came to the hospital without money. My wife was bleeding profusely and was drained of all energy as a result.”

“This initiative is a good thing, because without it, I am not sure if she would have survived,” he said.

Nafissa Njangui recently had a baby at the Lagdo health district, and she has since advocated that her friends and neighbours take advantage of the programme. “It is important that everybody know about the facilities available [with] delivery kits,” she stressed.

UNFPA organized training workshops to help roll-out the programme, and supplied an estimated three months’ supply of kits in the regions where the strategy was piloted. Facilities also received monthly support visits.

The programme has since been scaled-up nationally; the strategy is used at selected health facilities in nine of Cameroon’s 10 regions.

Within two years, over 30,000 delivery kits were used, about 3,500 of them Caesarean kits. According to a report on the pilot phase of the strategy, the rate of Caesarean procedures increased from 0.3 per cent to 3 per cent, and deliveries in health facilities doubled.

According to demographic and health survey data, the country’s maternal mortality rate stands at 782 deaths per 100,000 live births in 2011 – among the highest in the world.

“Of course, since the launch of the kit pre-positioning strategy sponsored by UNFPA, progress has gone in the required direction,” Dr. Yaya added.

UNFPA has additionally helped train about 200 health workers on obstetric care in the North Region.

While much of the maternal death rate results from delays in accessing care, Dr. Francois Dadao, one of two gynaecologists at the regional hospital in Garoua, says another factor is to women’s inability to make decisions about their own lives or health, for reasons ranging from traditional beliefs to poverty.

To help empower women to obtain proper care, Dr. Dadao said, “the focus should be on sensitization of traditional and religious leaders, opinion leaders, men, traditional midwives and, of course, women, for all to understand the necessity of an appropriate medical routine for pregnant women.”