KACHIN STATE, Myanmar – Since the armed conflict in northern Myanmar’s Kachin State intensified in December, nearly 7,000 people have fled the area, often amid shelling and airstrikes. Among the people on the run are 260 pregnant women. Many of them are sleeping on the roadside, unable to find shelter. Their needs are acute.

The area is highly militarized, and ongoing fighting and unsafe routes restrict access to the people in need.

Women are under threat of violence, including sexual violence, both in daytime and at night. High-risk situations include having to manage sanitation and menstrual hygiene without shelter, privacy or protection. 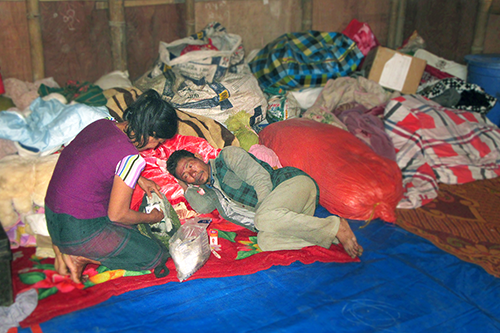 Hpauyam Kaw Mai cares for her disabled husband on the concrete floor of their temporary shelter at Hpumlum Yang camp. © Metta Development Foundation

Women and girls at risk of assault

While many people on the run remain unaccounted for, some have arrived at camps away from the fighting. There they are staying in halls without partitions and sleeping on concrete floors.

Many of the thousands of people who have fled were already living in camps, which they had to evacuate as the fighting approached. The conditions of extreme stress combined with lack of privacy mean that women and girls’ vulnerability to violence has escalated.

“Women and girls fear assault each time they have to go into the forest to relieve themselves, each time they go to sleep without a door to lock behind them,” says UNFPA field officer Kyaw Wai Aung, who delivered dignity kits to displaced women in Sadung Township.

With the help of Kachin Baptist Convention, UNFPA has also distributed solar lanterns to women and girls to improve their safety at night. 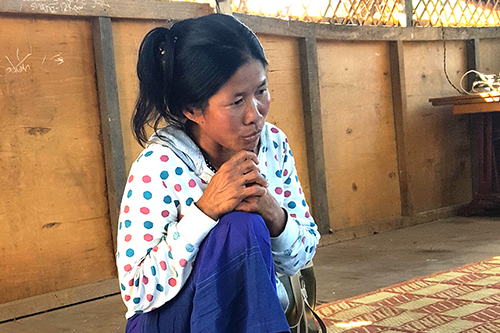 “I feel drained and without a soul”

Hpauyam Kaw Mai, 44, fled the embattled Maga Yang camp to find shelter at the Hpumlum Yang camp. She was among the last to leave because she was not able to move her three children – ages four, six and seven – or her disabled husband.

“We made children go to bed to the sound of gunfire, afraid of the bullets coming our way. We didn’t have enough to eat. I don’t remember how many days we got through without meals. I don’t know what happened to the children either. They would not eat, even when we were given some biscuits.” 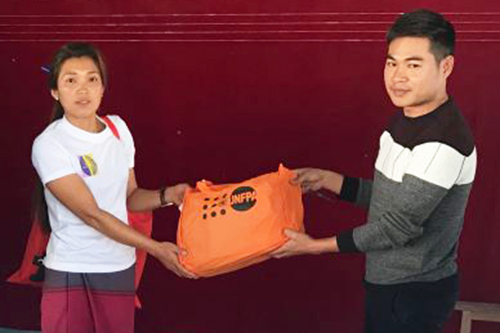 When two-thirds of the camp population were gone, Kaw Mai was told to get ready to leave. She packed the family’s bags, and also the roofing and other parts of her shelter. They had to spend two nights sleeping out in the cold before they could be evacuated. In a temporary shelter at Hpumlum Yang camp, Kaw Mai is ill and struggling to care for her family.

“I feel very small and vulnerable. I don’t know where to go and what to do. I don’t even know where I can collect a piece of firewood," she said. "I cannot bear the struggle any longer. I feel drained and without a soul.”