PORT-AU-PRINCE — Older people and female heads of household are the two most vulnerable groups affected by the 12 January earthquake in Haiti.

That finding was among the preliminary results of a rapid needs assessment carried out by the IASC (Inter-agency Steering Committee), coordinated by OCHA (the Office for Coordination of Humanitarian Affairs) together with the Haitian government.

The purpose of the needs assessment is to provide a quick and factual overview of the emergency situation in Haiti, making initial estimates of needs more precise and improving the ability to define priorities for the ongoing assistance. The survey will also help identify continuing or emerging threats that could escalate the emergency. 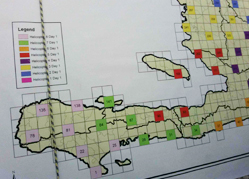 Survey teams sampled every third quadrant throughout the country and all quadrants in affected areas. Photo: Reiko Niimi

The questionnaire focused on population size and movements, as well as the availability of shelter, and access to food and water. A section focusing on gender issues revealed that nearly half of those asked felt there was a lack of privacy for women living in makeshift camps and on the street, while the vast majority said designated latrines for women are not available, potentially making them more vulnerable to rape and other forms of gender-based violence.

A more detailed, conclusive report of the findings will be available next week.

By foot, by car, by helicopter and horseback

Eighty student and professional volunteers recruited by UNFPA, the United Nations Population Fund, were among the more than 100 surveyors from many different organizations and backgrounds who conducted the survey, which covered the entire country.

“The survey is not only based on interviews with key people in affected areas, but also on recent census data,” explained Gabriel Bidegain, a demographer who works for UNFPA in Haiti.

In the areas devastated by the earthquake, creative approaches to getting around were employed, as many streets are still blocked by fallen bricks, mangled iron rods and other debris; or by people who have set up camp and are sleeping in the street. Volunteers criss-crossed Port-au-Prince, areas to the west, such as Leogane and Carrefour, as well as the southern city of Jacmel by foot, car, helicopter and, in a few cases, by horseback.

Surveyors divided the country into a 10 by 10-kilometre grid system and collected data in every third quadrant across the country, except in the most affected areas—in the capital and surrounding areas— where all areas were covered. 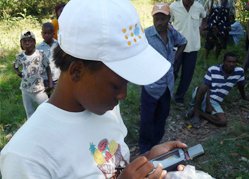 “We worked with many of the same volunteers during the needs assessment in Gonaives [following hurricanes and severe flooding there two years ago]. If it hadn’t been for that experience, we would never have been able to mobilize so many volunteers so quickly,” said Bidegain.

Jacques Hendry Rousseau, a volunteer and leader of one of the three-person teams that covered different sections of the affected areas, said people were eager to contribute information. “This is a good field experience for the university students, who are happy to contribute in this way to post-earthquake activities,” he said.

Volunteers used a combination of handheld computers and a 12-page questionnaire to record the information.

Soaring violence, fuel crisis and a cholera outbreak: Haiti in the grip of a “…