NEGLASARI VILLAGE, West Java, Indonesia — For years, villagers here didn’t realize that too many of their wives, daughters and mothers were dying needlessly. “People thought that deaths related to pregnancy and childbirth were not unusual,” recalls Nurlela, a midwife serving Neglasari village in the Tasikmalaya district. “And village men believed that women should be responsible for their own health and wellbeing.” 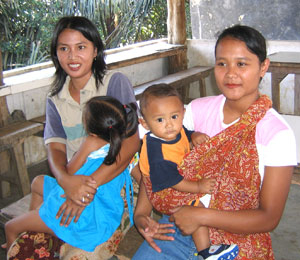 With the support of their husbands, more and more pregnant women in the village consult with the village midwife. Photo: Maria Endah Hulupi

Because they didn’t know better, husbands expected their pregnant wives to continue doing their chores at home followed by work in their paddy fields. Most men did not encourage their wives to get pre-natal care or plan for childbirth. About 9 out of 10 pregnant women in the village called on paradji (traditional birth attendants) for assistance during labour. In addition, certain traditional beliefs were causing problems – such as the notion that pregnant women should avoid a number of foods with high nutritional values. These factors contributed to the high maternal mortality: In a village of some 5300 people, three or four women died each year while trying to give life.

"Husbands now realize that they too need to be involved – from pregnancy to caring for the baby."

But things have begun to change. Since the recruitment and training of volunteer male motivators and the establishment of a community task force for safe pregnancy, Nurlela has noticed an increase in support for pregnant women and new mothers. More and more women are showing up at her clinic for pre- and post-natal consultations. Often husbands come along. Husbands are now allowing their pregnant wives to rest instead of working beside them in the paddy fields. Similar progress is also seen in nearby Salawu village.

Five male motivators in Neglassari village have been conducting home visits to educate pregnant women, their husbands and families about healthy pregnancy and planning for delivery by health workers or skilled birth attendants. “Husbands are now aware of the danger signs in pregnancy and when to seek help,” says Sumitra, the coordinator of the male motivators in Neglasari village. “They realize that they too need to be involved – from pregnancy to caring for the baby and their upbringing.” Villagers have shown a willingness to participate, now that they understand that the lives of mothers are at stake and how they can help. “They would help without hesitations when asked,” says Sumitra. 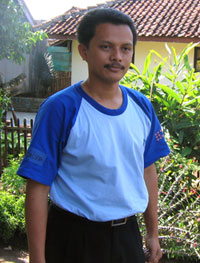 Neglasari and Salawu are two of the villages where the Indonesian Planned Parenthood Association (PKBI) and the Japanese Organization for International Cooperation in Family Planning (JOICFP) have jointly initiated a three-year project, which UNFPA, the United Nations Population Fund, supports. Activities include mapping of mothers-to-be, including those with high-risk pregnancies, establishing a safe pregnancy task force, recruiting male motivators, working with ‘night watchers’, conducting home visits, and using community radio to build awareness about safe motherhood. The project, which began in 2004, also works with community and religious leaders and trains local traditional performers, called tarling, so that they, too, can spread health information throughout the community. The pilot villages have also set up community funds, known as dasolin, to offset costs for emergency obstetric care, transportation or related expenses.

Whenever a woman in labour needs skilled care, a male motivator immediately alerts the village midwife. If a higher level of attention is needed, the woman will be rushed to local community health centre (puskesmas). If she is unable to walk, community members carry her on a stretcher made of two bamboo sticks and a sarong, up a steep staircase to the road where transportation – a vehicle belonging to a villager, a rented minivan or an ambulance – is waiting. 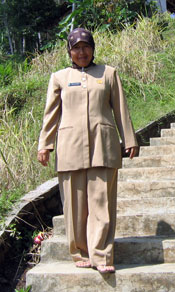 “The social bond in Tasikmalaya district is still strong and it helps with the programme implementation there,” explains Etsuko Yamaguchi, from JOICFP, adding that progress in another district has been slower.

“Each area has its own unique characteristics, and our aim is to make the best of the existing arrangement/system. Empowering village night watchers – which are quite active here – to assist pregnant women get timely care was done in that spirit,” says Chatarina Wahyurini, of PKBI. The night watchers are volunteers who take turns monitoring pregnant women and making sure the midwife and male motivators are alerted if an emergency arises.

Five male motivators in Neglassari village have been conducting home visits to educate pregnant women, as well as their husbands and families, about healthy pregnancy and to encourage them to plan for a skilled attendant at birth. Midwife Nurlela acknowledged that the male motivators have contributed enormously to the safe motherhood programme in the village. “They improve reporting on pregnant women and identification of the women with pregnancy complications. Thanks to them, 100 per cent of pregnancies in the village are now reported and monitored,” says Nurlela, adding that 90 per cent of village women now come to her for delivery, rather than relying on the traditional birth attendants.

Nurlela, who has formal medical training, sees her relationship with the seven paradjis, most of whom have special social position in the village, as one of partnership, rather than competition. She has found a way to increase coverage of skilled assistance without creating resistance either from these traditional birth attendants – or the community who still depends on their services.

“Partnering with the paradji means I get to accompany and ‘assist’ them during delivery process,” she explained. She considers it a win-win situation. The villagers are winning too, now that they are not losing so many mothers to complications of childbearing.”

The project to encourage male involvement in reproductive health is being implemented in four villages in West Java, two in Tasikmalaya district and two others within the Indramayu district. Throughout rural West Java, maternal mortality is high – more than twice as high as in the country as a whole, which averages 307 deaths per 100,000 births, based on the Indonesian Demographic and Health Survey 2002-2003. In an effort to improve the situation, the Ministry of Health developed the National Strategic Plan on Making Pregnancy Safer, 2001-2010.

Reducing maternal mortality is also a top priority for UNFPA, which supports safe motherhood initiatives in 89 countries. Successful efforts like the one described here need to be implemented on a much larger scale in order to meet targets set forth at the

International Conference on Population and Development and in the Millennium Development Goals, which call for a 75 per cent reduction in maternal mortality between 1990 and 2015.

Supporting the Local Production of Low-Cost Hygiene Products in India