NEW DELHI, India – A new study by UNFPA has found that laws to check gender discrimination and son preference in India are often ineffective, and in many cases, may advance discriminatory practices. The report, Laws and Son Preference in India, recommends the need for a new, anti-discrimination legal framework to guide laws and policies for women and girls.

The study reviews key laws relating to women including sex selection, dowry, dowry, child marriage and sexual assault. It finds that the laws themselves, and their interpretation, non-implementation or absence, may directly or indirectly propagate son preference.

“A deeply entrenched preference for sons exists for various reasons including that a son inherits property, whereas a daughter is perceived as more of a burden due to factors such as dowry – a practice that continues to prevail despite being illegal," said Frederika Meijer, UNFPA Representative for India and Bhutan. “Laws and their implementation are the backbone of social change. They hold the potential to change mind sets and stem generations of gender discrimination. This study offers a new perspective on reforming laws so that they work for women and girls.” 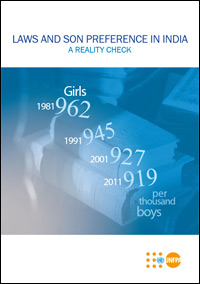 The study, authored by Advocate Kirti Singh, outlines how laws and policies for girls and women should be guided by a more explicit anti-discrimination legal framework that spells out in greater detail substantive and procedural rights for women in different fields of work, and applies to state and private actors. This recommendation for a more comprehensive framework is in line with the Bill of Rights in the Verma Committee Report that details the grounds on which women cannot be discriminated against.

The study finds some legal provisions are not just inadequate in preventing son preference, but also promote the practice and end up being discriminatory for women, such as the Goa Law on Polygamy that permits a second marriage for the husband when there is no son from the first marriage. The study strongly recommends removing such discriminatory provisions.

While a law that is not implemented is damaging, one that inadvertently propagates son preference goes against the Indian state's commitment to gender equality. Priority must be given to reform inheritance laws, the study finds, specifically reform land and tenancy laws, so that widows and daughters can inherit equally to male members of the family. In addition, it recommends revising the definition of 'dowry' under the Dowry Prohibition Act and making child marriage illegal below a certain age.

The report also highlights the fact that laws are absent in critical areas like honour crimes and marital property rights. It recommends that laws addressing these issues should play an important role in securing rights for women.

The full report is available here.