NIMBA COUNTY, Liberia --“I walked, walked, walked for our baby,” says Toinette, who is 17 years old and pregnant. She is among the 150,000 Ivoirians who fled to Liberia since the disputed presidential elections in Cote d’Ivoire in December 2010.

Like many other girls and women, Toinette escaped without her husband and with little more than the clothes on her back. Armed forces were conscripting young men and her husband had to go into hiding in the forest. Although the political stalemate in Cote d’Ivoire has been resolved, dire conditions still affect the country’s western region, and refugees are not yet able to return home.

“I don’t know where my husband is. I was feeling lost but I had to escape to find a safe place for my delivery. It is our first baby: it should come within less than one month now,” Toinette explains. She found refuge with a Liberian family in New Yourpea, and has now access to health care in the clinic, operated by the Ministry of Health and Social Welfare, where she plans to deliver.

Six years after the end of the civil war, Liberia itself is still rebuilding its infrastructure. The country already faces considerable challenges in providing basic health care services for its own population. Since the outbreak of violence in Cote d’Ivoire, Liberia has also hosted refugees along its remote Eastern and South-Eastern border areas.

Safeguarding the reproductive health of refugees

Pregnant women have already suffered from the interruption of health care services in Cote d’Ivoire for several weeks. Some of them fled under terrible conditions, putting their lives in danger. Others even had to give birth in the forest along the way, in search of safe haven. 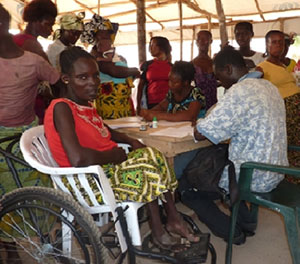 “I was exhausted after nearly three days of walking. During the second night, while we were hiding in the forest I felt the first pain. I was so afraid to die under the trees without any health care,” says Christine in Bahn refugee camp as she cuddles a tiny baby boy, born several weeks before term. “We survived and managed to cross the border. Now we are safe in the refugees camp where we are given food and shelter,” she adds. But the stress and trauma of the conflict can still be felt. “I am still so afraid,” Christine explains, “the bad memories of the war are coming back every night, and I have very little breast milk.”

UNFPA’s immediate response since the influx of refugees consists in the distribution of reproductive health kits containing drugs, equipment and supplies to support health facilities at borders areas. Some of these facilities have seen the demand double as thousands of refugees hosted in their areas require reproductive health care. The kits have been distributed in various counties allowing the government-run clinics to offer basic and comprehensive emergency obstetrical and neonatal care.

Dignity kits for women and girls

In this humanitarian crisis, more than half of households are headed by women who fled alone with their children. “We just brought our life with us, everything else is left behind,” explained Marianne in Bahn refugee camp. “When it’s time for our monthly menstrual cycle I don’t have anything to keep me clean and neat,” she adds. The UNFPA distribution of essential hygienic feminine products brings back dignity to women and girls among the refugee population. “Of course we do need food, but we are also women and we have our specific needs,” said Marianne.

Prevention and response to gender-based violence

Many women and girls fled a war territory where violence and rape were used by the fighters as a weapon against civilians. Now in a safe haven, rape survivors can access appropriate medical care in the health facilities that received kits from UNFPA that contain medications and supplies needed to treat survivors of sexual violence. 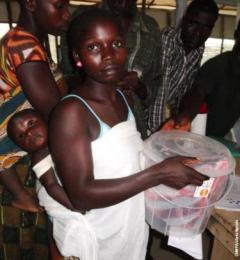 A refugee recieves her dignity kit at the Bahn refugee camp. Photo: UNFPA

UNFPA is also actively supporting the on-going program of the Minister of Gender and Development of Liberia, by coordinating an emergency program to adapt the system to the crisis and provide specific response to survivors of gender-based violence among the refugees. By mobilizing partners offering services to survivors of sexual violence, a referral pathway has been adapted and translated into French. This will help address  the specific needs of the girls and women from Cote d’Ivoire, who now find themselves in a foreign country where they do not speak the language.