L’ASILE, Nippes department, Haiti – On the grounds of the Hôpital de Référence Communautaire de l’Asile in the southwest, Désir Murielle rests in a tent steps from hunks of twisted, fissured metal that once was the hospital’s maternity wing with her newborn son. “He was born this morning, and he is called Yves,” said Ms. Murielle.

Baby Yves would have been born in that now-collapsed ward if not for the 7.2 magnitude earthquake of 14 August that killed more than 2,200 people, injured more than 12,000 and destroyed essential infrastructure including hospitals, roads and bridges.

“There were two women lying in the post-partum ward of the maternity wing when the building collapsed,” recalled Eludernme Déenius, a senior nurse and midwife. “You can still see the beds crushed beneath concrete. Very fortunately they felt the tremor and escaped.”

Help for the hospitals

Hôpital de Référence Communautaire de l’Asile is one of 18 damaged or destroyed health facilities receiving support from UNFPA to continue offering reproductive health services in the area most affected by the disaster. Next month, with the support of the Ministry of Health, UNFPA will deploy a fully-fledged mobile emergency obstetric and newborn care (EmONC) unit to handle deliveries and obstetric complications.

In the first two months following the earthquake, UNFPA supported some 1,540 births in health centres and hospitals. UNFPA estimates more than 72,000 pregnant women are estimated to be affected, and of the 15,000 pregnant women who will give birth in the next three months, 2,250 will suffer obstetric complications that will require care such as Caesarean sections. Of the 30 midwives UNFPA deploys, 60 per cent are in departments affected by the earthquake.

On the morning of Yves’s birth and that of a baby girl, another took place during the recent visit of UNFPA Deputy Executive Director Diene Keita. “It was moving that this baby was born in the compound of this hospital that was razed to the ground by the earthquake,” said Ms. Keita, adding that it was the efforts of multiple United Nations agencies – UNICEF, OCHA (United Nations Office for the Coordination of Humanitarian Affairs) and WFP’s (World Food Programme) humanitarian air service, UNHAS – that contributed to “the miracle of this baby being born.”

While the humanitarian response to the earthquake remains ongoing, attention is turning to longer-term reconstruction of not just this hospital but other damaged and destroyed homes and infrastructure and to how communities can recover from this crisis.

In December, the Haitian government is hosting an international conference to raise some of the estimated $2 billion needed for the reconstruction and recovery effort.

Combating gender-based violence is part of that recovery effort. “Women and girls are more vulnerable after an earthquake because they are no longer living at home but alongside strangers, and they don’t have access to bathroom facilities,” explained Taina Camy, who works on gender-based violence issues at UNFPA. “More than two months after the earthquake, we are able to provide more services to women and girls in need, especially at the local level.”

Back in the maternity tent in L’Asile, Ms. Murielle and other mothers welcome another arrival. And one day, in the not-too-distant future, the hospital itself will be given a new life of its own. 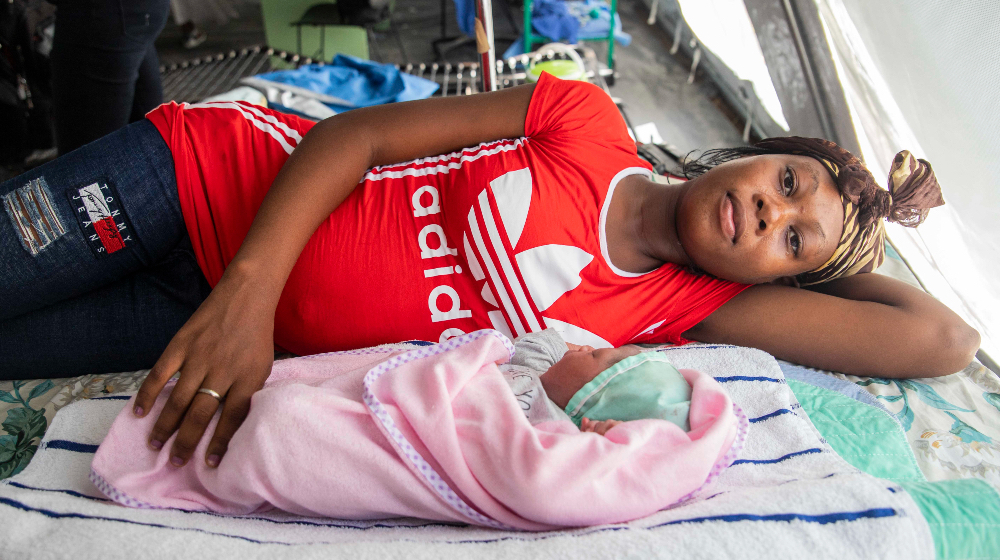 UNFPA scaling up humanitarian assistance in Haiti to help survivors of…