NANGARHAR, Afghanistan – Raihana Bibi is a 30-year-old mother of four children – one boy and three girls. Their family returned to Afghanistan from Pakistan and settled in Nangarhar Province about two years ago. They were among the more than 600,000 returnees to make the journey from Pakistan and Iran back to their homeland that year.

The mass influx left the health system overstretched, health organizations have reported. And economic hardship made access to essential care even more precarious.

A year into their return, the issue became urgent: Raihana discovered she was pregnant.

“We were extremely worried because we did not have enough money to take care of my health,” she explained.

But then they got some good news: “One day, my husband came home happy. He had heard about a mobile health team that comes to our area once every 15 days. He insisted that I meet the midwife on the team.”

UNFPA is working to expand access to life-saving reproductive health care among vulnerable returnee populations in Afghanistan. The organization is supplying health services at several border entry points, including at the Torkham border in Nangarhar and the Kandahar/Spin-bold border point.

For Raihana, this care made all the difference.

“I went to see the midwife the day the mobile health team came to our area. She examined me and told me that I was five months pregnant. She also gave me some pills for the prevention of anaemia and a kit that contained some items for delivery. She instructed me to go to a clinic at the time of delivery,” she recalled.

From then on, Raihana met the midwife every month throughout her pregnancy.

“There was no vehicle in our village to take us to the nearest clinic when I went into labour so we called the midwife to ask for help. Fortunately, she said that a team was working in Siasang Village in the Surkhrod District, a nearby area. About 40 minutes later, the mobile health team arrived and took us to the Shaikh Misri Township clinic. I delivered a healthy baby girl two hours later.”

Three days after the delivery, when the baby was diagnosed with jaundice, Raihana reached out to the midwife once again. She was advised to continue breastfeeding, and her daughter was treated during the next mobile health team visit.

Humanitarian crises have affected many parts of the country. During the first half of 2019, fighting between government forces and armed groups in the province of Kunar led to the displacement of about 1,000 people. Similarly, the drought in Herat Province left over 200,000 people displaced and in acute need of health services.

UNFPA has reached over 120,000 crisis-affected people with health care so far in 2019 – including those in Kabul, Nangarhar and Laghman in the east, Kunar in the northeast, Baghlan and Kunduz in the north, and Nimruz in the southwest of the country. The organization is also supporting midwives working for 10 mobile health teams run by the Afghan Red Crescent Society.

As for Raihana, she is determined to help others access these essential services.

“My cousin’s family was one of many displaced families that came to our village after fleeing the conflict in Khogiani District in Nangarhar Province. His wife became sick. She had a fever, body pain and was vomiting.  They did not have enough money to take her to hospital,” she recalled.

“I took her to meet the mobile health team and she was treated for malaria.” 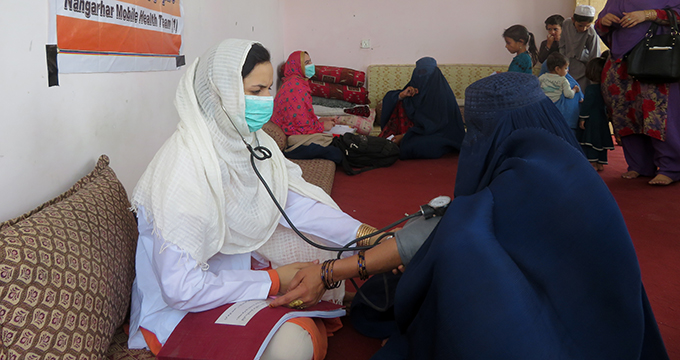