UNITED NATIONS, New York – Gladys Kalibbala, a journalist in Uganda, knows what loss looks like. She has seen it hundreds of times, in the faces of children without homes and in the desperation of mothers searching for their children.

“In 2011, I profiled Christine Nakabuye, who had just been brought to work as a maid around Kampala,” said Ms. Kalibbala, who writes for the Kampala-based newspaper New Vision.

“She ran away from her employer, as she wanted to go back to school. Her father had died and the mother, who sold her out as a maid, did not have money to send her, plus her other six siblings, to school.”

Ms. Kalibbala wrote about Christine in her ‘Lost Children’ column, where she covers children who are lost or abandoned by one or both of their parents. Her column – and her advocacy on behalf of the children she profiles – has drawn global attention to a widespread problem.

Around the world, vulnerable families fracture under the strain of extreme poverty.

Households headed by women, who receive fewer opportunities and less pay than men, are among the most vulnerable. Too often, children are pulled from school so they can find jobs or care for younger siblings. Others are left unattended while their parents work.

Some, like those profiled by Ms. Kalibbala, go missing.

“I have so far profiled over 400 children in this project, where I have helped in [placing] more than 60 of them in schools,” Ms. Kalibbala said. “Some are re-united with their families while others go to Naggulu Reception Centre [a childcare facility]. The problem of abandoned children covers almost the entire country, as they come from all corners of Uganda.”

This is a worldwide problem, one recognized at the 1994 International Conference on Population and Development. “There are increasing numbers of vulnerable families, including single-parent families headed by women, poor families with elderly members or those with disabilities, refugee and displaced families,” said the conference’s outcome document, the Programme of Action. It continued: “In many urban environments, millions of children and youths are left to their own devices as family ties break down.”

To support such families, the Programme of Action recommended “increasing the earning power of all adult members of economically deprived families, including the elderly and women”.

Yet 20 years later, families remain as vulnerable as ever.

In too many countries, working remains incompatible with the demands of childcare. And women continue to make significantly less money than men, making it more difficult for them to support their children. 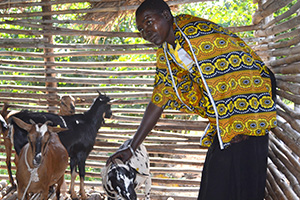 “In order for women to overcome such difficulties, especially those in rural areas… they need to be empowered,” Ms. Kalibbala said. “It’s high time women become self-sufficient.”

She called for income-generating projects for women, “like poultry, piggery or planting crops to sell, which enables them to provide for their families.”

Education is another critical intervention, she said. “The adolescents need vocational training to be taught skills like tailoring, painting, carpentry, mechanics, hair dressing, etcetera, that can help them in the future. The young children should be given appropriate education to allow them to lead a meaningful life when they grow up.”

UNFPA’s Executive Director, Dr. Babatunde Osotimehin, underscored these points in a statement for the International Day of Families, on 15 May. “I call on governments to create environments that support all families through, for example, measures that enable parents to reconcile family and work responsibilities, and housing, education, and social support policies that recognize the growing diversity of household arrangements,” he said.

Sexual and reproductive health services are also essential. Unplanned pregnancies contribute to the economic difficulties families grapple with, Ms. Kalibbala noted. In the direst cases, these challenges can lead to “failure to provide basic needs like good education, health care, food and a place to live.”

UNFPA works to promote access to sexual and reproductive health services, including voluntary family planning services, in Uganda and around the world. But an alarmingly high proportion of people, particularly the poor, still live without access to these services.

Ms. Kalibbala has received numerous awards, and she was recently featured in a documentary film, Misconception, for her work on behalf of children.

“She’s not interested in preaching anything to anyone,” said the filmmaker, Jessica Yu. “She’s simply out there helping, child by child, because it is necessary.”

Ms. Kalibbala’s work has inspired others to take action, as well.

After the publication of her story about Christine, the girl who had been forced to work as a maid, a school director from Entebbe, a city just outside Kampala, contacted them.

“The director… educated her for three years until she took her primary leaving examination,” Ms. Kalibbala said. “She managed to pass in second grade, which the director explained was a great achievement, as she had joined when her education was very poor.”

But there is much more work to be done, she notes. Communities must address the underlying issues that leave children vulnerable and their families struggling.

Until then, Ms. Kalibbala is determined to continue her advocacy, making it possible for even lost children to find hope.