MARGIBI, Liberia — Eyea Mulbah was only 14 years old when the rebels attacked her village, forcing her and her family to flee. In the confusion of the fighting she became separated from her brothers and parents and was forced to find a means to survive on her own.

“I got lost from my parents. They went one way, and I went the other,” she recounts. “They attacked in the night. We were running all away, and I got lost. I couldn’t find anybody.”

Lost and alone, Eyea sought shelter with a group of five girls, all of whom had been separated from their families in the fighting. Without any money for food, Eyea used sex as a means to survive.

“I was forced to go out and give myself to this fellow just so I could provide myself something to eat,” says Eyea, now 28. “Because I didn’t have food, I had to offer my body to him.”

She moved in with the man, and soon became pregnant. A second daughter followed a few years after her first. Eyea felt she had no choice but to stay with the father despite ever-increasing abuse.

“Everyday he beat me,” she says. “He would beat me in bed and tear my clothes off of me.”

With support from the Organization for Children and Adolescent Mothers (OCAM), Eyea eventually found the strength and the skills to get out of her abusive relationship. The NGO provides vocational training, daycare, reproductive health education and guidance in HIV prevention to young women affected by Liberia’s 14-year civil.

“He couldn’t force me to have sex anymore,” Eyea says. “I knew how to protect myself and my children.”

"Almost 91 per cent of respondents had been subjected to one of more acts of abuse or sexual violence during the war."

OCAM, with financial and technical support from UNFPA, the United Nations Population Fund, assists Eyea and other so-called ‘baby mothers’ in four Liberian counties. Training is available in crop and animal science, palm oil manufacturing, soap making, tie dying, tailoring, cosmetology and home economics. Literacy and basic math classes are offered, as well as information on family planning, health and nutrition. Childcare is provided for infants and toddlers so that working women know their children are being cared for.

Eyea graduated from vocational training in 2000 after nine months of training. She is now working and finishing her last year of high school, and she plans to enroll in a university. She’s encouraging her daughters own high aspirations as well: Thirteen-year-old Princess wants to be a professor, and eight-year-old Farzee wants to be a nurse. 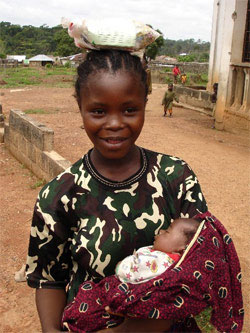 “I’m working, earning my own living. I won’t make myself vulnerable to any man,” proclaims Eyea. “The men tell us we are nothing. I’m here to tell them we are something.”

“Empowerment is the key to reducing gender-based violence,” agrees Rose Gakuba, UNFPA Representative in Liberia. “By educating and training girls so they can make a living and support themselves, they won’t be as vulnerable to exploitation.”

Civil war raged in Liberia from 1989 to 2003. During the conflict, Liberian girls and women were subjected to multiple forms of sexual violence, including gang rape, sexual slavery, ‘survival’ sex in exchange for food, and unwanted pregnancies due to rape. A WHO study found that almost 91 per cent of respondents had been subjected to one of more acts of abuse or sexual violence during the war. Subsequent informal studies indicate that the legacy of brutality continues, and that the gender-based violence continues to threaten women and even very young girls. 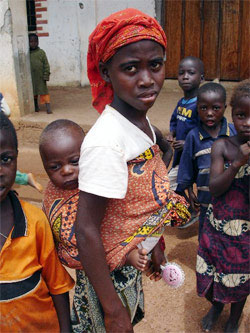 A whole generation of Liberian young people have grown up knowing nothing but violent conflict and its aftermath. Photo: Priya Marwah

Since the inauguration of Africa’s first female president last January, however, dealing with this issue, including ending widespread impunity for perpetrators, has become a priority for the new government. In November, a secretariat was launched within the Ministry of Gender and Development to deal specifically with gender-based violence. UNFPA works with this new office, with sister UN agencies, NGOs and other partners to provide medical, psychosocial and legal help to survivors of sexual violence, like those at OCAM.

The Fund has also played a key role in formulating a five-year national action plan that lays out a multi-sectoral approach for addressing the issue. Other reproductive health problems are also rampant in the war-ravaged country, and UNFPA is also working to re-establish the health infrastructure, prevent HIV and other sexually transmitted diseases, and reduce maternal and infant mortality rates, which in Liberia are among the highest in the world.

Much of the work on the ground is being carried out by NGOs like OCAM. One of their recent meetings, full of healing and support, evokes an old-time revival. A drama, illustrating the value of family planning, is met with loud laughter by spectators, many cradling young children and babies. Lois Bruthus, the executive director of OCAM, rallies the young women to believe in themselves in order to achieve their full potential.

“One mistake will not end your life. Whatever happened to yourself during this war, you can still stand up and say I have worth,” Bruthus tells those assembled. “Whether you were raped, whether you were a combatant, you can overcome all odds with self worth.”

Bruthus said organizations like OCAM are essential to rehabilitating survivors of sexual violence, enabling them to heal.

“I see them move from victims to survivors...They have discovered themselves. There is no height they cannot reach. This is what I see in these women and kids,” said Bruthus, tears in her eyes. “I believe I have touched a life, many lives. If today is the last day of my life I am happy, because I have fulfilled my life.”

Betsy Doebo nurses her five-month-old daughter Gloria in the daycare room at OCAM. Twelve babies, wrapped in shawls and towels, sleep snugly on a mattress on the floor under a sign that reads, “Please be quiet, I’m resting.” Older babies crawl around nearby under the watchful eyes of their adult caretakers.

Doebo teaches tie dying at the centre. She said that she wants to help others the way OCAM saved her following her war experience.

“During the war, I suffered a lot. The bombing started and I ran into the jungle. The rebels found me and tied me up,” she says. “I thought they would kill me.”

Doebo made her way to Monrovia. When she needed a helping hand to get back on her feet and provide for her children, OCAM showed her the way.

“I like helping these girls. I want people to be like myself so they don’t have to beg for money,” she says. “I want them to be able to help themselves and their families.”