Indigenous people are disproportionately among the poorest of the poor. Often they are marginalized by language, location and cultural beliefs and practices. An innovative project has managed to give the Quecha-speaking descendents of the Incas the benefits of both traditional and modern medicines in a culturally sensitive manner.

OTAVALO, Ecuador —Most of the residents of this city, sprawled across a high plateau in the Andes, are Quechua-speaking descendents of the Incas. Though the climate here has been described as 'eternal spring', the health conditions in Quechua-speaking areas are often far worse than in Spanish-speaking regions. Some 3 million of Ecuador's 12 million residents speak Quechua, many of them living in indigenous communities in the high Sierra that have been bypassed by development. Roughly 90 per cent of indigenous communities live below the poverty level, a grim fact reflected in high maternal and infant mortality rates. In some remote communities, maternal mortality reaches 250 deaths per 100,000 live births, compared to the national average of 130, and one of every 10 infants does not live to see his or her first birthday.

As part of its national strategy to address the needs of the poorest, underserved communities, UNFPA's Ecuador programme has financed an innovative project in Otavalo to improve the quality and scope of reproductive health care provided to Quechua-speaking communities, in particular. A modest grant of $340,000 over four years allowed the Jambi Huasi health clinic, which was established in 1994, to expand and upgrade its services, initiate an outreach programme, provide reproductive health education and information to women, men and adolescents and introduce a referral system for obstetric complications. Jambi Huasi, which means Health House in English, provides both modern and traditional medical treatment, as well as family planning advice and services. The traditional healers draw from a "pharmacy" of over 3,600 native plants used for medicinal purposes.

" Because we are not preaching fertility regulation and the use of contraceptives alone, these traditional communities are much more receptive to our messages and services. "

The unique combination of services has made Jambi Huasi a very popular clinic. Although it was initially set up to serve some 4,000 people a year, by 2005 over 1,000 people per month were using the clinic's services, some coming from as far away as 50kilometres.

Blanca Cusin Camreudo, a 23-year-old mother of two small children, has been coming to the clinic for two years. She is now ready to space her children and has asked about contraception in order to better plan her family. "I like the services here," she said in accented Spanish. "I get good advice from the doctors, the medicines are inexpensive and I can get all the services I need under one roof."

This comprehensive approach to reproductive health care has attracted a lot of attention from other NGOs and the government. "Not only do we provide a full constellation of reproductive health and family planning services," said the clinic's petite director, Dr. Miryam Conejo, "but we do so in a culturally sensitive fashion, taking into account the special needs and concerns of our clients, who are mainly Quechua-speaking natives." 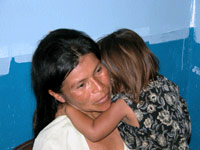 Services provided at Jambi Huasi allow women to space their children and to take steps to make sure they have safe, healthy pregnancies. Photo: Don Hinrichsen

Jambi Huasi has a staff of 14, including two indigenous medical doctors and two community volunteers, who help with outreach. About half of Jambi Huasi's clients use the services of traditional healers. "We have delivery rooms here, as well as an examination room, a lab for blood work, a dentist's office, a pharmacy which dispenses both modern and traditional medicines, an information and education programme, and outreach services, which include an ambulance for bringing emergency cases to the local hospital," said Dr. Conejo.

One remarkable feature of Jambi Huasi is that it is a self-sufficient operation. "Cost recovery is an important aspect for us," said Dr. Conejo. "Right now client fees account for all of our budget, but we do get a small amount from donors for special projects.

"We need to expand our services and outreach to other communities,” she said. “Already we have an outreach service that brings our medical and educational services by van to several poor, remote mountain communities, but the needs in this region are overwhelming."

Another remarkable aspect of Jambi Huasi is its full-time communication and education specialist. Dr. Mercedes Muenala, who has a degree in internal medicine from the University of Quito, spends most of her time speaking to women and men in Quechua communities in an attempt to increase awareness of reproductive health issues and to build up demand for the services provided by the clinic and its satellite operations.

“We have managed to increase the basic knowledge of women and men regarding their fertility and how they can have safe births with healthier children,” said Dr. Muenala. “Because we are not preaching fertility regulation and the use of contraceptives alone, these traditional communities are much more receptive to our messages and services.”

As Quechua communities learn more about reproductive health issues and how to take better care of their children and newborns, the contraceptive prevalence rate has climbed from 10 to 40 per cent in areas served by Jambi Huasi. Though most Quechua women still want four to six children each, they now space their children and take steps to make sure they have safe, healthy pregnancies. As a result, both the infant and maternal mortality rates have fallen in Otovalo.

The key, said Dr. Conejo, is to "transform state services into community services, services that better match the needs of your communities." This, she stresses, is one of the keys to the success of Jambi Huasi. "We changed the way health services are offered in traditional communities by making them totally community-based. Once people perceive that they are getting the medical care they actually need, not what medical authorities are telling them they need, it is possible to make rapid and lasting improvements in the reproductive health of women, adolescents and men."