XESACMALJA, Guatemala - The tiny town of Xesacmalja, four hours west of the capital, Guatemala City, is nestled between pine forests and surrounded by streams. The streets are usually quiet in this poor Mayan village, but last November they were bustling with activity as elders and dignitaries arrived to attend an event held by the community’s girls. The celebration, hosted at a local civic centre, showcased all that the girls had achieved through the Abriendo Oportunidades – ‘Opening Opportunities’ – Programme.

Nearly half of the Guatemalan population is indigenous, and more than 20 Mayan groups live in isolated rural areas with limited access to basic services. By age 15, six out of 10 indigenous girls are out of school. By age 18, almost 40 per cent of Mayan girls are married – nearly twice the percentage of non-indigenous girls. Abriendo Oportunidades aims to empower girls to continue their educations and reach their full potential. 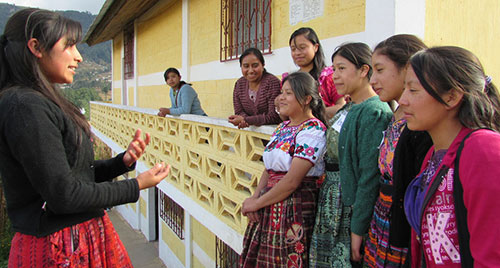 Abriendo Oportunidades teaches girls valuable life skills and empowers them to speak out in their communities. Photo Credit: UNFPA

Elders, community leaders, media and private sector foundations – including guests who had travelled from the capital – attended the event, where about 20 girls and adolescents spoke in Quiché (one of the 21 Mayan languages spoken in Guatemala) and Spanish about how the programme had taught about their rights and health and empowered them to have a voice in their communities.

“I am very proud to be here with you today and to listen to these girls tell us about how they have learned new skills through the Abriendo Oportunidades Programme,” the mayor said to those assembled. “I am proud because I believe that what we need more than anything else is education. And I say that because I didn’t attend school for even one day as a result of my family’s poverty… [that] I can say that I have been able to support them fills me with pride.”

Guatemala’s population is one of the youngest, fastest-growing and least educated in Latin America. More than 2 million children in Guatemala do not attend school. Most of them are indigenous girls living in rural areas.

Research by the Population Council has determined that very few of these girls have access to social programmes. Only when they become pregnant do they have access to basic health services. And once their babies are born, the girls are unable to continue learning and are deprived of the tools needed to make a better future for themselves and their families.

To break this cycle, UNFPA and the Population Council, in collaboration with local and international partners, launched Abriendo Oportunidades in 2004. Through community-based girls’ clubs, the programme helps girls aged 8 to 18 navigate adolescent transitions. Safe spaces were created in rural communities, where girls and their mothers can come together to gain important life skills. Sessions cover improving self-esteem, developing aspirations, planning for the future, learning about sexual and reproductive health, and learning how to prevent HIV/AIDS. The clubs, which are run by the girls themselves, also help members develop leadership skills.

The Guatemalan Indigenous Girls Resource and Empowerment Network (GIGREN) was established to serve as a platform for indigenous girls to advocate for their needs and rights at the community and national level.

Most of the girl leaders in the programme return to school and extend their educational goals, guiding them to safe and healthy livelihood options. And as the girls learn new skills, their families and communities are strengthened.

“My father is an alcoholic and he was often abusive to me, my mother and my siblings,” said Olga, who recently graduated from Abriendo Oportunidades. “It was affecting me, and I had left school. But then I joined the programme and was able to coach my mother so that she would make him leave the house. We are all doing so much better now. I am back at school, and my mother comes with me to the Abriendo Oportunidades meetings. I now have a voice and plans for my future.”

The programme has reached more than 9,000 indigenous girls in seven Mayan ethnic groups across 40 rural communities – and it continues to expand. The Abriendo Oportunidades Scale-Up pilot project is being implemented in 75 communities in the Municipality of Chisec in Alta Verapaz, Guatemala’s poorest region. It is expected to reach 5,000 girls in three years.

UNFPA and the Population Council are now working with the Guatemalan Institute for Radio Education (IGER) to incorporate radio programmes and distance education into the scale-up. With the distance education programme, the Scale-Up programme aims to eventually reach 15,000 girls. And the radio programmes, often heard by all the women in a household, are having a multigenerational impact.

The programme is also increasing its emphasis on financial literacy and on helping girls and young women gain access to business opportunities.

As the audience in the Xesacmalja civic centre applauded the youths’ achievements, it was clear the girls had learned more than simple tips to improve their situations. They had learned about their own power to initiate change for themselves, their families and their country as a whole.