These remarks set the tone of the United Nations General Assembly Special Session on the International Conference on Population and Development (ICPD), taking place today at UN Headquarters in New York.

The Special Session marks the 20th anniversary of the ICPD, the 1994 conference in Cairo that broke new ground by recognizing that sexual and reproductive health and rights, gender equality, and equal access to education are prerequisites for sustainable development.

Today’s Special Session brings together heads of state and other global leaders to assess the implementation of the ICPD Programme of Action and to renew their commitment to achieving its goals. Following Dr. Osotimehin's speech, some 120 presidents, heads of governments, ministers and other senior officials from around the world affirmed their continued support the ICPD agenda.

Progress, but not enough

Enormous progress has taken place since the ICPD, which “shifted the focus from human numbers to human lives, human well-being and human rights,” Dr. Osotimehin noted. 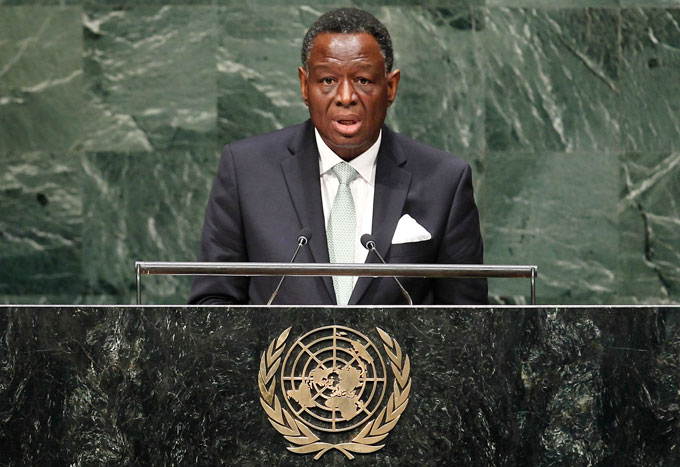 The past 20 years have seen maternal mortality rates fall by nearly half. Hundreds of millions of people have emerged from poverty, and girls have better access to primary school than every before.

More women have been empowered to enter the workforce, gaining a measure of economic independence and improved status in their communities.

“These advances show how powerful development founded on dignity and human rights can be,” Dr. Osotimehin underscored.

But despite this progress, there remain persistent threats to the rights and well-being of vulnerable populations around the world, including women and girls, indigenous peoples and those living in extreme poverty.

And in the poorest communities, women’s and girls’ low status, high rates of maternal death, and grave rights violations such as child marriage have yet to be addressed. “We must confront the fact that some 800 women still die each day from causes related to pregnancy or childbirth,” said Mr. Ban.

“One out of every three women in the world, in every country and from every background, will experience physical or sexual violence in her lifetime,” Dr. Osotimehin said.

“In no part of the world is gender equality fully realized,” he added, “and in some places, existing gains risk being rolled back.”

Income inequality is also rising rapidly, threatening long-term sustainability. Over the past 20 years, 53 per cent of the world’s income gains have gone to the wealthiest five per cent of the population – and none to the poorest 10 per cent.

Growing inequality increases the difficulty of emerging from extreme poverty. And while climate-warming emissions are disproportionately caused by a small, and affluent, minority of the human population, the effects of climate change will disproportionately fall on the poorest and most vulnerable communities.

“The pace of climate change and environmental degradation shows that we cannot sustain a system in which those at the top continue to draw more and more of our finite resources,” Dr. Osotimehin said. “Until we can deliver for all people equitably, and enable all people to reach their potential, we cannot achieve sustainable development.”

Human rights and dignity must continue to play a central role in future development efforts, the leaders urged. As the world maps out its post-2015 development plans, policymakers must remember the importance of investing in the health, educations and rights of vulnerable communities.

These investments improve not only people’s economic prospects but also their resilience to the consequences of climate change, and their ability to act as effective drivers of progress.

“These issues must be at the heart of the post-2015 agenda to ensure that current and future generations are made up of resilient, adaptive, innovative, creative people capable of building resilient societies,” Dr. Osotimehin said. “If we can do that, we will be able to address any challenge that our world faces, today and tomorrow.”