PORT-AU-PRINCE, Haiti – “At 55, I already have four children. I realized that I do not have enough resources to take care of more mouths in my family,” explained Lamour Denis, at a reproductive health clinic in Haiti’s capital, Port-au-Prince. “So,” he added, resolutely, “I decided to do it.”

He decided to get a vasectomy.

While vasectomies are a relatively common form of contraception in places like the United Kingdom and the Republic of Korea, according to 2017 data from the United Nations, the procedure is much less popular in Haiti.

Because of traditional perceptions around masculinity, family planning is widely considered a woman’s responsibility. In 2012, only 0.1 per cent of women surveyed said they relied on a partner’s vasectomy as a form of contraception. Only 5 per cent relied on male condoms. 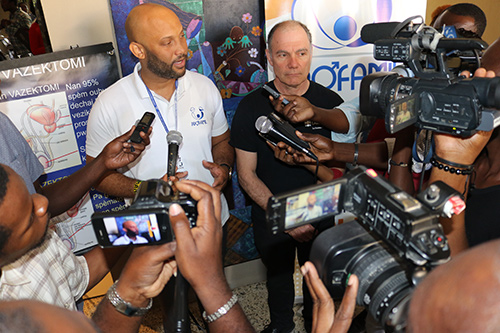 A press briefing, part of a vasectomy workshop and drive that aimed to increase the availability of this contraceptive option in Haiti. © Moïse Alex Docteur/UNV

And many women lack access to contraception altogether. It is estimated that only 51 per cent of women in a relationship have their demand for contraception satisfied by modern, reliable methods.

Improving information about – and access to – this contraceptive method is essential to empower both men and women to take control of their futures.

And, as Mr. Denis’s experience shows, men are increasingly interested in exploring this option.

The surgery was offered as part of an outreach event for men, supported by UNFPA and conducted by a health clinic run by the Association for the Promotion of the Haitian Family, also known as Profamil.

The partnership hoped to reach 25 men. Organizers were stunned when over 100 people registered.

“We had three teams of vasectomy surgeons with commodities for 25 people,” recounted Dr. Gianni De Castro, the director of Profamil. “But there were more than 100 people to register, and we had 83 vasectomies, compared to only 18 last year."

Dr. De Castro credits improved awareness in the community for the turnout.

Television and radio spots for the event drew attention with humour, announcing that the vasectomy procedure takes less time than a traffic jam at Canapé Vert, a suburb east of Port-au-Prince.

And there is truth in this advertising: "Fifteen minutes were enough for each of the interventions, which were conducted without scalpel and by two of the leading specialists in this practice," the head of Profamil added. Two international doctors and three local doctors performed the procedures.

Many of the men who signed on for the procedure arrived at this choice with their partners.

Mr. Denis, married for 20 years, spoke to his wife, Marlène Louis, about the surgery. They decided together that it was a sensible option for their family.

Ms. Louis accompanied her husband to the event. While there, she reflected on the importance of access to family planning for all Haitians.

"It would be so much better if everyone on their own made arrangements to plan their lives in relation to the number of children they wanted to have," she said.

UNFPA works in Haiti, and around the world, to increase the availability and variety of contraceptives, so individuals and couples can choose the methods that work best for them.