For Haiti, Lighting Up the Camps and ‘Smile Clinics’

PORT-AU-PRINCE — Two years after the devastating earthquake that struck Haiti, more than 500,000 people still live in camps as reconstruction efforts have not kept up with demands for housing and cholera remains a serious killer. As humanitarian relief operations wind down to make room for long-term development projects, hundreds of thousands of displaced people continue to rely on aid to survive.

Gender-based violence has become an alarming issue in the camps as well, where the combination of minimal lighting and cramped conditions creates insecurity. In some of the larger camps, rapes are almost part of everyday life. 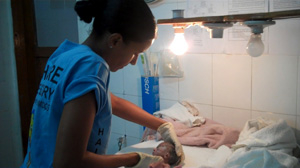 Stephanie Orsucci, a midwife in Haiti, with a preemie at a Clinique Sourire, or 'Smile Clinic,' one of four new maternity centres initiated by UNFPA and partners.

To address the problem, UNFPA Haiti installed 200 durable solar streetlights in 40 of the camps last year. The lights were installed near showers, latrines and water distribution points – places where women may be vulnerable to violence. The project was made possible from the support of the United Nations Foundation and the American music band Linkin Park, which collected funds through a sensitization campaign among its fans.

Besides helping to prevent sexual violence, the lamps allow some women to continue their informal trade outside their shelters at night and to socialize. The lamps also enable students to study in the evening if they do not have electricity. 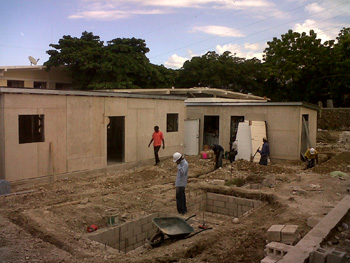 A new Clinique Sourire under construction in the countryside. The centres offer comprehensive care for women, including cervical cancer screening.

Women living in camps face other considerable challenges, such as limited access to health-care services and maternity wards. The pregnancy rate in Haiti significantly increased after the January 2010 earthquake, so UNFPA initiated the Clinique Sourire (‘Smile Clinic’) project with partners to build maternity centres in rural areas offering full care. The country currently needs about 84 such clinics to meet the needs of pregnant women.

The fourth Smile Clinic is now being built and will open by March; it and the three others are located in the West, Artibonite and South East departments, areas strategically mapped by the Haitian Ministry of Public Health.

"The idea is to allow people living in remote areas to have access to basic services, such as prevention, antenatal clinics, diagnosis, medical care, delivery, perfusion, distribution of medications, hygiene of mother and child,” says Stephanie Orsucci, a midwife in Haiti.

Midwives will also take part in organizing inventories, management and administration at the centres.

In Haiti, only 25 per cent of all deliveries occur in health institutions, and the maternal death rate is 630 mortalities per 100,000 live births, the highest in the Americas. However, the Haitian experience has shown that when midwives are used, more mothers’ lives are saved.

In addition to services for admission, delivery, post-partum and childbirth complications, the clinics provide care for low birth-weight babies, prevention of HIV transmission from mother to child and screening for cervical cancer, which is the third-leading cause of death for Haitian women.

Obstetric fistula is also becoming a serious problem in Haiti, where some women have little or no access to emergency Caesarean sections during prolonged or obstructed labour. That is often the case in crisis situations, says Gillian Slinger, the coordinator of the global Campaign to End Fistula.

To help remedy the problem, UNFPA arranged for two Haitian urologists to travel to Niger in November to participate in a three-week training course on fistula surgery and techniques. There, they worked on 29 fistula patients.