JUBA, South Sudan – At age 47, Angelina Akongo was the oldest of 73 midwifery and nursing students from Juba and Kajo Keji to graduate this year – and she feels like a brand new person. “I am a better person now,” she said.

Her success offers a clear lesson to those in her community: Age should never deter one from pursuing their dreams.

Nor should conflict or tragedy. And Ms. Akongo has experienced more than her share of both.

Ms. Akongo first fled conflict during the civil war when South Sudan was still part of Sudan. Her family fled to Uganda, but found that refugee life was just as difficult and uncertain as life back home, so they returned to their community in Nimule in 2002.

“The following year, I went on a 9-month training on maternal and child health, which gave me the opportunity to be employed as a health worker,” she recalled.

The work was rewarding, but life remained harsh.

Even though she was a health worker, health care was often out of reach.

Illness claimed the lives of three of her four children, as well as her husband. She was widowed at age 36.

In 2010, as she was still in mourning from her husband’s death two years earlier, Ms. Akongo decided to change the course of her life. She attended a training on community midwifery and, thereafter, went to work for an international NGO as a community midwife in Kapoeta.

Her work was essential.

South Sudan has one of the highest maternal mortality rates in the world. A woman’s lifetime risk of maternal death is 1 in 26, according to United Nations figures from 2015. Many of these deaths could be prevented with access to basic and emergency obstetric care, yet fewer than 1 in 5 births in South Sudan take place under the care of skilled health personnel.

And the country has struggled to improve health services since it gained independence in 2011. Conflict has been ongoing for the last five years, disrupting health systems.

But rather than give up, Ms. Akongo only worked harder.

In July 2016, at age 44, she was admitted to a diploma programme in midwifery at the Juba College of Nursing and Midwifery – a scholarship programme offered by the Strengthening Midwifery Services Project of UNFPA and the Ministry of Health.

Funded by the governments of Canada and Sweden, the project aims to address South Sudan's critical shortage of health professionals, particularly in the field of midwifery.

Ms. Akongo’s prior training, through a short-term certificate course, enabled her to perform basic services. But this programme will enable her to serve as a full-fledged midwife, with skills and training that meet the standards of the International Confederation of Midwives.

South Sudan has increased its number of qualified midwives from fewer than 10 in 2008 to 879 today, Dr. Mary Otieno, UNFPA’s representative in South Sudan, announced at the graduation.

The midwifery project has contributed 444 of these midwives.

Dr. Otieno also called attention to the fact that this year is the 25th anniversary of the International Conference on Population and Development, a landmark event at which world leaders agreed that reproductive health and rights – including access to family planning and maternal health care – are essential preconditions for national development.

Midwives, Dr. Otieno added, are at the heart of this work.

“Just as the Kajo Keji and Juba colleges have been a community of learning that has served you well, choose always to serve those communities that you call home. Remember, it has been said that service is the rent you pay for the space you occupy on this earth,” she advised.

That is exactly what Ms. Akongo plans to do.

“After graduation I will go back and serve my community in Nimule,” she said. 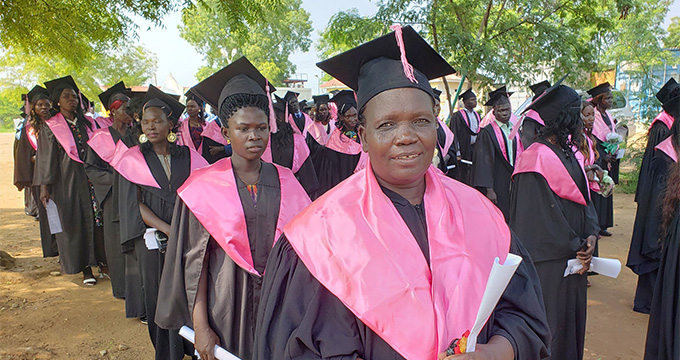