A father's campaign for midwives in South Sudan

RUMBEK, South Sudan – More women in South Sudan die during pregnancy and childbirth than in nearly every other country in the world. Yet the vast majority of maternal deaths can be averted with proper antenatal, delivery and postnatal care – services provided by midwives.

Midwives play a critical role in South Sudan’s fight against maternal mortality. But for one midwife in Rumbek, their efforts cut even deeper.

“My father has eight wives and 24 children,” said Peter Door, a father of one who decided to pursue a career in midwifery two years ago.

For Peter, spreading awareness about – and providing access to – family planning is central to building a better future not only for women, but for their families and communities, too.

“[My father] told me to marry and have lots of kids, but I thought educating one is better than educating many, as you won’t be able to afford the latter,” he said.

Peter is not alone in this view. Women who are better equipped to plan whether and when to have children are more likely to complete their education, advance their well-being and strengthen their economic security – ultimately improving the education and health of their children as well.

“And that’s what we want to share with everyone,” Peter told UNFPA.

Still, nearly one third of women in South Sudan do not have access to family planning information or services. And only 6 per cent of maternal health needs across the country are met each year.

To close the gap in maternal care, UNFPA is working with the National Ministry of Health through its Strengthening Midwifery Services project in South Sudan, focusing particularly on midwifery education and training.

Peter is just one of 600 midwives in South Sudan to receive training and mentoring from the project, which also provides scholarships in an effort to increase the number of women attended to by qualified health personnel. Over 300 scholarships have been awarded to date.

And the project is having an impact.

Over the past year, more than 100,000 women and newborns have been reached by UNFPA and partners – receiving reproductive health services such as antenatal care, assisted delivery, postnatal care, family planning and gender-based violence support.

The project also supports 14 health facilities across the country, strengthening the capacity of Government to deploy midwives to the hardest-to-reach places.

News of midwives’ efforts is spreading.

“In 2014, an average 40 mothers came to the family planning clinic every month,” said Judith Draleru, a midwife from Uganda who works at the Juba Teaching Hospital. “Now, between 150 and 170 mothers come monthly.”

Draleru says that when women realize they have the right to make choices about their reproductive health, they are eager to do so – and to spread the word.

"The education and continuous training I received from the midwifery project has developed my confidence to handle complicated cases, such as when I delivered twins and triplets,” said Justine Mwangwi, a scholarship recipient who now works for the project.

“Now, I feel like I am ready for quadruplets.” 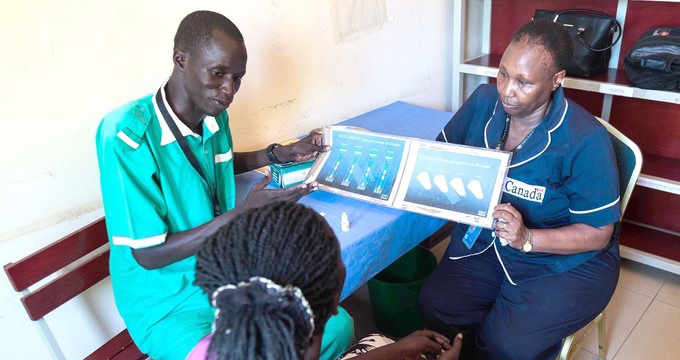 A father's campaign for midwives in South Sudan