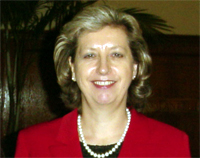 Ministers and parliamentarians should enforce existing laws, to kick gender violence out of homes, communities and nations, UNFPA's Deputy Executive Director (Management), Imelda Henkin, has urged. She was speaking at a mid-March workshop on parliamentary advocacy in Dhaka, Bangladesh.

Enforcing laws and conventions, Ms. Henkin said, would counter the rise in gender violence in many places by ending the sense of impunity perpetrators felt when too many of them were not prosecuted.

"Poverty, discrimination, weak legislation and poor enforcement fuel violence against women and girls and nowhere is this more apparent than in the growing trade of human trafficking," said Ms. Henkin. "Some 30 million women and children across the Asia-Pacific region have been trafficked over the past 30 years." This is a new form of slavery.

Leaders at the workshop, Ms. Henkin said, should propose actions to ensure that a new regional convention on trafficking could effectively counter the crime.

"Violence against women has a profound impact on development," said Ms. Henkin. "It perpetuates poverty by reducing women's capacity to work outside the home, their mobility and access to information, and children's school attendance. … The brutal discrimination and violence they face is not only a violation of human rights, it is also a serious threat to their health and the health and well being of their families, communities and nations."

Violence against women and girls persists on a massive scale, Ms. Henkin said. These -- according to a General Assembly resolution expressing concern -- include trafficking in women and children, female infanticide, crimes committed in the name of honour and of passion, dowry-related violence and deaths, acid attacks and harmful traditional or customary practices, such as female genital cutting and forced marriages.

In South Asia, where parents sometimes preferred boys, the problem began in the womb, said Ms. Henkin. It was estimated that over 60 million girls were "missing" from various populations, mostly in Asia, as a result of sex-selective abortions, infanticide and neglect. "These 60 million girls were eliminated for one reason-and one reason alone: because they were girls," she said.

For its part, UNFPA worked to improve laws and policies and to raise awareness on those issues, said Ms. Henkin. It supported the training of health workers to help violence victims, and of police officers and judges to enforce relevant laws. Its programmes involved men, to generate more awareness and positive behavioural change.

In India, UNFPA helped develop a national advocacy strategy to promote the value of the girl child. In Bangladesh, it worked with the Home Ministry to raise awareness of women's health and gender issues among nearly four million members of village defence pacts and police personnel.

Ms. Henkin also welcomed national and regional laws to protect women from violent acts such as acid crimes and trafficking.

Ms. Henkin was speaking at the South Asian Parliamentarians Workshop on the Elimination of Violence against Women. It was organized by the Asian Forum of Parliamentarians on Population and Development, in cooperation with the UNFPA Bangladesh office and the Fund's Country Technical Services Team, based in Nepal.