Ebola prompts efforts to boost condom use in Liberia

MONROVIA, Liberia – “I am HIV-positive, and I am sure I acquired the virus through sexual contact,” said Stephen McGill, of the group Stop AIDS in Liberia, at the launch of a campaign promoting condom use. The recent Ebola outbreak has dramatically underscored the importance of condoms in preventing sexually transmitted infections. The campaign, launched by UNFPA and partners, aims to reach 1.5 million Liberians with condoms and related information.

Condom use remains distressingly low in the country. More than 90 percent of people are aware of the benefits of condoms, according to the country’s 2013 demographic and health survey, yet only 3 out of 10 people report using condoms during their last ‘high-risk’ sexual activity. 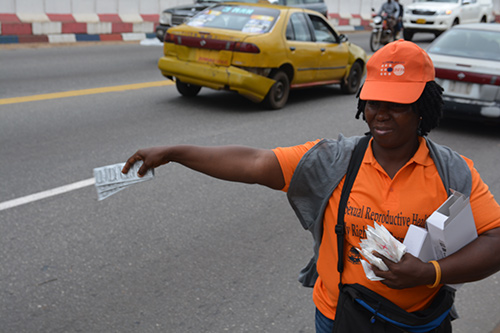 Female and male condoms are distributed in the capital, Monrovia, during the launch of a major campaign promoting condom use. © UNFPA Liberia

The survey also revealed that, among those with multiple sexual partners, only 19 percent of women and 23 percent of men reported using condoms during their last sexual encounter.

HIV remains a significant concern in Liberia, with some 30,000 people believed to be living with the disease as of 2013. And the country’s adolescent pregnancy rates are high. Out of every 1,000 adolescent girls, some 149 give birth; globally, this figure is 50.

But the need to improve condom use was also powerfully brought to light during the region’s devastating Ebola outbreak. More than 27,000 people have been infected by the virus and over 11,000 have been killed. Liberia was declared Ebola-free in May, but several new cases have renewed concerns about the disease.

Because the Ebola virus is detectable in semen many months after the onset of symptoms, condom use is strongly recommended to prevent sexual transmission of the disease.

On 4 June, UNFPA, with the Government and local partners, launched a campaign promoting information about, and use of, condoms. It emphasizes the role of condoms in preventing sexually transmitted infections, including Ebola and HIV, and in preventing unintended pregnancies. 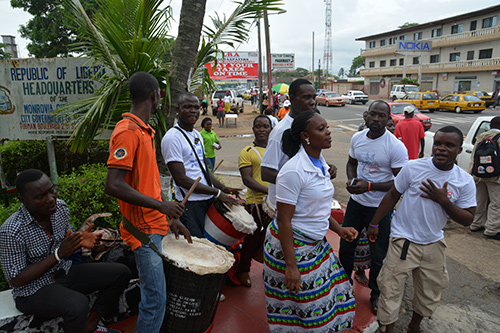 The condom distribution is accompanied by music, dancing and entertainment. © UNFPA Liberia

So far, about 450,000 male condoms and 10,000 female condoms have been distributed through the campaign, which was unveiled in the capital, Monrovia. Monrovia was badly affected by the Ebola outbreak and has one of the highest HIV prevalence rates in the country.

“Use condoms, stay safe,” Mr. McGill announced to an auditorium of young people at the launch. His organization is one of the partners in the campaign.

“Although condoms promotion and distribution is not new in Liberia, the troubling statistics of low usage, coupled with unintended pregnancy and high HIV prevalence, as well as the potential transmission of the Ebola virus through sexual intercourse... are strong indicators that should compel us to reinforce the supply and use of condoms by the population – especially young people,” said Julia Duncan-Cassell, the Minister of Gender, Children and Social Protection, at the event. 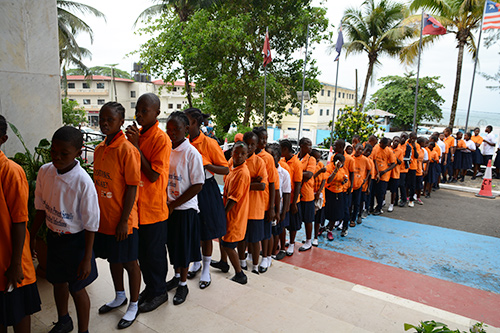 Youth queue to attend the launch of the campaign, which included information about the role of condoms in preventing sexually transmitted infections and unintended pregnancies. © UNFPA Liberia

As part of the launch, condoms were distributed at key points in Monrovia. By all accounts, the free condoms and information were warmly received by members of the public.

Further distributions are set to take place throughout the country, including in schools, community centres, hotels, bars and restaurants.

“This campaign is a means to ensure that populations are motivated to use male and/or female condoms, have access to quality condoms, have accurate information and knowledge about condoms, and use condoms correctly and consistently,” said Oluremi Sogunro, UNFPA’s officer-in-charge in Liberia.

“We are committed to ensuring that condoms are available, affordable and accessible to everyone for safer sex practice,” Ms. Duncan-Cassell added.