Dial 555 for Help on Fistula

The new fistula hotline is the fruit of a partnership among the Gloag Foundation, US Agency for International Development, the United Nations Population Fund (UNFPA) and Airtel, a telecommunications company.

Shortly after the hotline was created, radio messages were broadcast in the local Krio language and in English, describing fistula and relaying the call numbers, 555. Fistula is a childbirth condition associated with prolonged, obstructed labor.

In the first month of the service, more than 8,000 calls were made to the Aberdeen Women’s Centre, which is managed by the Gloag Foundation and provides comprehensive fistula repair services in Sierra Leone. About 165 patients were referred to the centre through the hotline. So far, 119 patients have been repaired with a success rate of 85 per cent.

“This approach might be very effective to recruit fistula patients — always a challenge considering the stigma associated with the condition — and, perhaps, a useful approach in other countries as well,” said Anne Gloag of the Gloag Foundation. 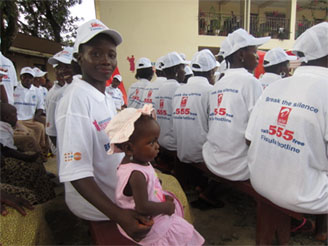 It is estimated that one in eight pregnant women develops fistula in Sierra Leone. Most of the cases stem from poor prenatal care and high teenage pregnancy rates.

Free health-care services for lactating mothers and pregnant women that began in 2010 are helping to reduce the risk of fistula and other maternal health issues. Sierra Leone, however, faces serious infrastructure and resources challenges, especially lack of skilled personnel and specialized facilities.

The country, which is still struggling to rebuild itself after a decade-long civil war, has just a handful of emergency obstetric care services and health professionals. Education and basic access to services deeply affect the health prospects of many women and girls, especially in rural areas.

“Most of the women living with fistula are uneducated,” said Sia Koroma, first lady of Sierra Leone. “They live in the countryside with little to no access to health facilities, ante-natal or post-natal care. The situation is particularly difficult for girls, who are not physically mature and are especially vulnerable to complications in childbirth.”

Dr. S.A.S. Kargbo, director of reproductive and child health for Sierra Leone, said, “We need both a preventive and a therapeutic approach to eliminate this condition as a public health problem,” noting that the free phone line is an important step to finding the women and treating the problem.

The Sierra Leone Ministry of Health is also working on a five-year strategy to tackle fistula through prevention, treatment and care for patients, an initiative supported by UNFPA and other partners. In November, the agency sponsored a conference with partners to brainstorm the major issues around fistula in the country.

“The purpose of the conference was to discuss the causes and consequences of fistula, treatment and social reintegration of fistula survivors,” says Haja Hawa Turay, director of the Haikal Foundation, which fosters education, social rehabiliation and development programmes in Sierra Leone. — Jarrie Kabba-Kebbay and Marian Samu