Despite trauma, a little help goes a long way for Syrian refugees

AMMAN, Jordan – “I’d just gotten off the night shift,” said ‘Aida*, a nurse, describing the morning her neighbourhood in Ghouta, Syria, was attacked with Sarin gas. “My son called out to me. He couldn’t see.”

It was 21 August 2013. Rockets had struck the neighbourhood, and people began to experience dizziness, loss of consciousness and other symptoms, according to a United Nations report on the incident.

“I noticed a faint smell and saw that my son’s eyes had turned white,” ‘Aida said. She rushed him to the hospital, only to find hundreds of others who had been injured or killed by the chemical weapons – including many children.

“That day… I prepared the bodies of children for burial,” she told UNFPA.

The experience left her shattered. “I’ve witnessed so much in that hospital, but I’m lucky because I still have my family. My children are alive.”

They fled to Lebanon soon after, but struggled to recover from the horror of the attacks and the uncertainty of their new lives.

They are not alone. After surviving brutal violence and upheaval in Syria, over 4 million refugees have found themselves uprooted, and are struggling to rebuild their lives. 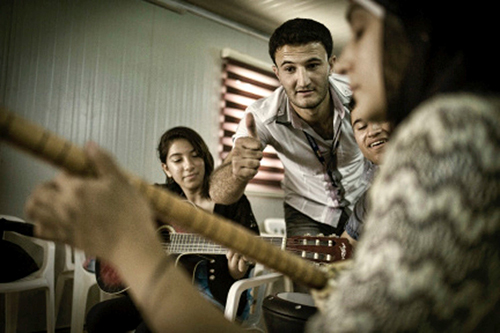 Ahmed and his sister enrolled in job skills courses at the Serdam Youth Centre. © UNFPA/David Brunetti

But often, basic services – such as counselling and skills training – can make the difference between despair and healing. UNFPA is supporting women’s centres, youth centres and family centres in Iraq, Lebanon, Jordan and elsewhere. There, refugees can receive the psychosocial care, health services, information and training they need to get back on their feet.

At the Al Marj Women’s Centre in Lebanon, ‘Aida began attending art therapy and drama therapy classes. These courses gave her the “support, energy and willingness to open my own business, along with courage to get engaged in the community and the confidence to stand up for myself and my family,” she said.

She opened a beauty salon in the Bekaa Valley, serving other refugee women, and eventually became a volunteer at the women’s centre.

“Being a refugee doesn’t mean you have to hide at home,” said Reem*, another refugee from Ghouta, who also volunteers at a women’s centre in Bekaa. “We can make a difference by helping each other.”

Ahmed*, 23, was a top student at his Syrian business school when the conflict broke out. He witnessed terrible tragedies. “My neighbour was shot while holding his daughter’s hand,” he said. “Frightened by the gunshot, the little girl could not understand that her father was gone.”

Ahmed himself narrowly escaped being kidnapped on his way to school. Afterward, his family crossed the border into Iraq, seeking refuge at the Domiz Camp.

For a long time, it seemed like all the promise in his life had been snatched away. But one day, he learned about vocational and recreational courses offered at the UNFPA-supported Serdam Youth Centre. He and his sister both joined, and began to learn and socialize with other young refugees.

Today, he sees a brighter future – not only for himself, but for his sister as well.

“I was brought up to think that a girl and a guy are different and unequal. We learned through peer education that both have the same rights,” he told UNFPA. “She feels better and she is learning things that will benefit her future life.” 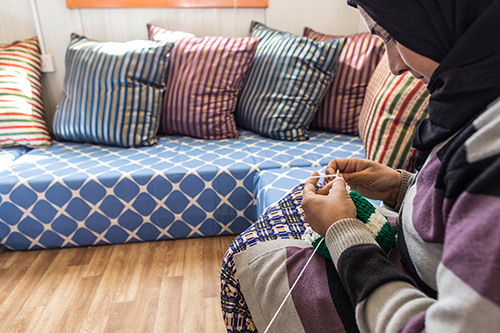 Rabee'a's* family fled Syria to escape the Islamic State of Iraq and the Levant (ISIL, also known as ISIS). She now enjoys craft classes at a support centre in Azraq Camp, Jordan.  "We can do many things that our families are desperately in need [of], such as [make] clothes,” she said. © UNFPA/David Brunetti

Manal* gave birth to her youngest daughter amid explosions and gunfire. Seeking safety, her family moved from place to place within Syria, struggling to find enough food to survive. Even though she was breastfeeding her infant, Manal lived on little the children did not eat.

After they crossed into Lebanon, visa problems forced her husband and son to return to Syria. They were arrested at the border, and Manal has not heard from them since.

Now, she and her daughters live with 20 people in a two-room apartment.

At the urging of a social worker, Manal and her daughters began to participate in programmes at a UNFPA-supported women’s centre. They have enrolled in job skills courses, and have become part of a supportive community of refugee women.

“At the women’s centre, I discovered I am a strong person,” Manal told UNFPA. “Whenever I come here my whole spirit changes.” 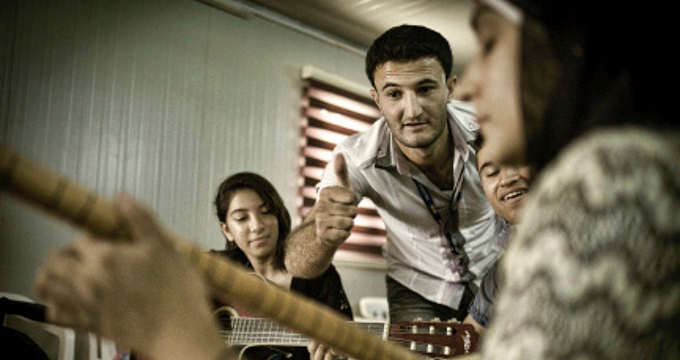 Despite trauma, a little help goes a long way for Syrian refugees