SA’ADA, Yemen – Civilian fatalities are mounting in Yemen, with some of the deadliest episodes of violence taking place in the last two months. UNFPA estimates over 400,000 pregnant women are caught in the conflict, requiring essential and sometimes urgent health services.

Sa’ada Governorate has seen some of the worst of this fighting. Of the 2.8 million people currently displaced in Yemen, nearly 300,000 of them fled from Sa’ada.

“The fighting intensified and we had to run for safer ground,” recalled Saleh*. Earlier this year, he fled his hometown in Sa’ada with his pregnant wife, Warda*. “My wife and I were the last ones who fled from our area. The houses in my neighborhood were empty but full of fear.” 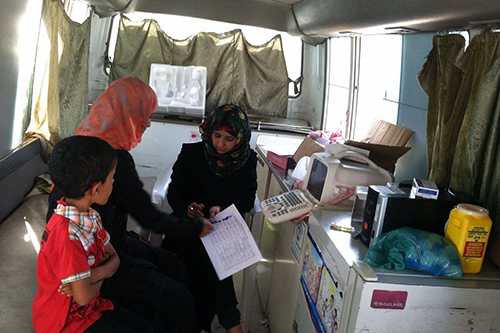 Inside a UNFPA-supported mobile clinic. The clinic travels to crisis-affected areas, providing a range of reproductive health services.  © YFCA Yemen

“I began to bleed heavily,” Warda, 20, said while fighting back tears. She was three months pregnant at the time.

“I did not realize what was happening to me. I was just focused on getting to a safer place.”

When they reached Amran Governorate, her clothes were soaked in blood and Warda was almost unconscious. Her husband rushed her to a UNFPA-supported mobile clinic, where a gynaecologist evaluated her condition and quickly directed her to the nearest hospital.

She was told at the hospital that she had lost the pregnancy.

“It was the worst experience of our lives,” Saleh said of their ordeal.

Adding to their heartache, Warda was told that she had a condition that required treatment, otherwise she would not be able conceive again.

“This news hit me like a storm,” she said. “I was afraid my husband would abandon me. He married me because he wanted children. I just went into a deep depression.”

The hospital recommended she receive counselling and assistance at a women’s centre run by Yemeni Women’s Union, with support from UNFPA. 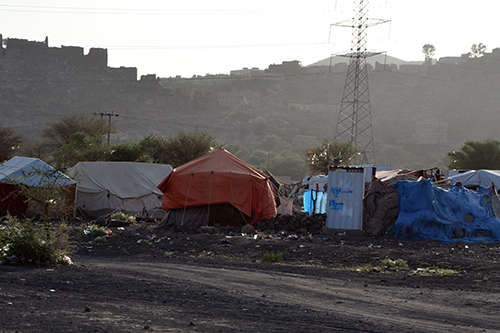 A displacement camp like the one where Warda and Saleh are staying in Amran Governorate. © UNFPA Yemen

“When she came to us, she did not speak at all,” said Faiza Al-Shami, a coordinator at the centre.  “It took us days to get her to speak. Even when she spoke, she spoke so softly that we hardly heard her.”

Women do not stop getting pregnant or giving birth in times of crisis. UNFPA works to meet to meet the unique health needs of women even in emergencies.

Since the escalation of the conflict in Yemen 16 months ago, UNFPA has been operating mobile clinics in governorates hosting large number of internally displaced people. UNFPA has provided antenatal and post-natal care, assistance for safe deliveries, and reproductive health kits that have benefited more than 453,000 women and girls.

UNFPA is also providing equipment for obstetric care and neonatal care to over 200 health facilities across the country. These facilities are linked to services that assist survivors of gender-based violence. Since the beginning of the year, more than 5,000 people – not only women and girls but also men and boys – have sought help, receiving, for instance, psychosocial support or legal advice. 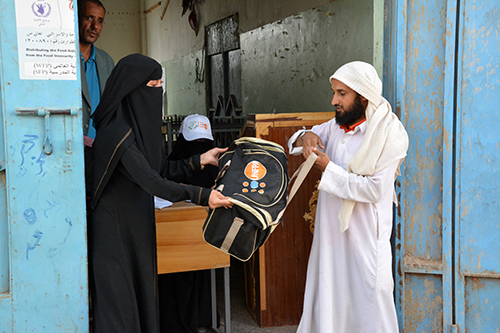 A man receives a dignity kit for his wife. In places like Amran, where women’s mobility is restricted, their husbands collect dignity kits on their behalf. © UNFPA Yemen

In addition to providing counselling, the centre in Amran also offers a place for conflict-affected women to meet and bond, and it provides courses to help them pick up new skills.

“Some of girls are so talented that they have even begun training their peers,” Ms. Al-Shami said.

Warda was encouraged to take a sewing course, and she proved to be quite good.

“Warda loves sewing. She makes wonderful pieces,” Ms. Al-Shami noted. “I was the first one to buy from her beautiful products.”

Six months after fleeing their home, Warda and Saleh are finding a new path forward. And Warda is pregnant again.

“We went through the worst time in our life, but we have a new life now, and we cannot wait for the arrival of our baby,” she told UNFPA.